How robots can help kids stay in school 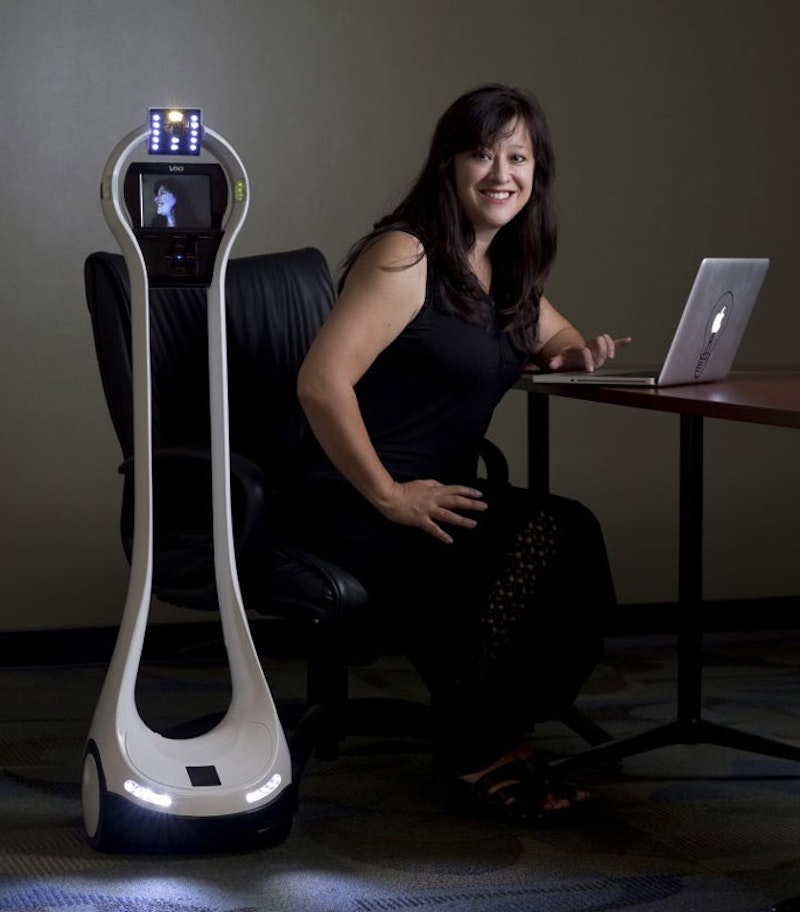 As a child growing up in California, Veronica Newhart was absent from school for weeks at a time due to a congenital heart condition. The loneliness and isolation she felt so many years ago are similar to what children with chronic illnesses feel today, but Newhart says it doesn't have to be that way.
A Ph.D. candidate in UC Irvine's School of Education, she believes that interactive technologies can facilitate person-to-person connections, and her research on telepresence robots in the classroom explores just that.
"People always talk about robots taking over and replacing us, but you can actually use them to improve the human condition, especially that of homebound children," Newhart says. "Just because these kids can't go to school doesn't mean they can't have a presence in the classroom."
Telepresence robots — Internet-enabled, two-way-video-streaming automatons that have wheels for feet and a screen showing the child's face at the top of a vertical "body" — act as surrogates. From home, a student controlling the device with a laptop or tablet can see and hear everything in the classroom, talk with friends and the teacher, "raise his or her hand" via flashing lights to ask or answer questions, move around and even go on field trips.
Preliminary results of a first-of-its-kind study Newhart conducted have shown that telepresence robots help homebound children feel more socially connected to their peers and more involved academically.
Technology that includes, not isolates
"What happens to humans when they're disconnected? They get depressed," she says. "This use of technology as a way to include children who are otherwise isolated fascinates me. Most importantly, we need to update the educational services provided to homebound children. We're using the same system that's been in place for more than 80 years: A tutor makes home visits for four to five hours a week and brings over stacks of paperwork for the child to complete. The tutor is the child's only connection to the classroom."
On April 19, Newhart — one of four UC Irvine graduate students named 2017 Public Impact Distinguished Fellows — will be among 22 UC students gathering in Sacramento for the eighth annual Graduate Research Advocacy Day. They will visit lawmakers and discuss the importance of graduate-level scientific inquiry and its contributions to California's economy and progress.
"I am honored that my research has been selected for this opportunity to have an audience with our elected officials," Newhart says. "This is an interdisciplinary project involving education, medicine and informatics that's a new genre of learning, and we are the only university in the nation studying it."
Her current research examines how telepresence robots affect both academic and social learning on the part of homebound students and their classmates. Teachers, administrators and parents also participate in the project, as another goal is to develop best practices and guidelines for the use of this technology in schools and homes. In a separate study, the influence of remaining connected via a robot on a homebound child's health and well-being will be explored.
Funding for Newhart's initial work was provided by the UC Irvine Graduate Division and the School of Education. She and Mark Warschauer, UC Irvine professor of education and informatics, were recently awarded a one-year Institute for Clinical & Translational Science biomedical and health informatics grant to conduct interdisciplinary research and provide formal recommendations for the use of robots in the classroom. Judy Olson, Donald Bren Professor of Information & Computer Sciences, is co-primary investigator on the study.
Source and top image: University of California