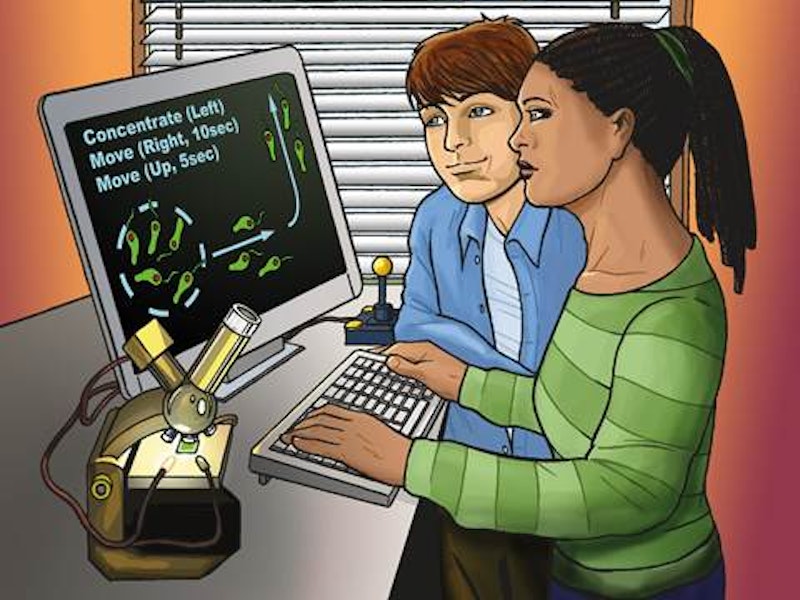 Scientists in the U.S have a designed a computer game that could help with biomedical research.
Scientists increasingly use miniscule robots to solve a range of problems, from cancer treatment to water purification. And, as with a lot of technology, the race is on to make these devices ever smaller.
However there is a limit to how far you can go with a mechanical device - moving parts such as motors can physically only get so small.
So scientists are looking to the natural world to help. Single cell organisms, such as bacteria and algae, could make the parts in the miniaturised robots move, without the need for an external power source.
Such organisms respond to changes in their environment - such as light and food - by moving, and if these movements can be harnessed, we can use them as motors.
In a new paper just published, Ingmar Riedel-Kruse and fellow scientists from Stanford University in the U.S. have demonstrated the use of one such organism, in the form of a game.
It's based on Euglena gracilis, single cell algae that move in response to changes in strong light. In the game, the organisms are directed around a maze or "captured" in a space on the screen by the users turning lights on and off. The ability to control the movement of the algae demonstrates their potential application in mini, single cell organism-driven motors.
In this set-up, the algae's movements are programmable - a promising first step towards creating a microcomputer built on biotechnology.
Source and top image: Royal Society of Chemistry
Learn more at the next leading event on the topic: Sensor Innovations Europe 2020