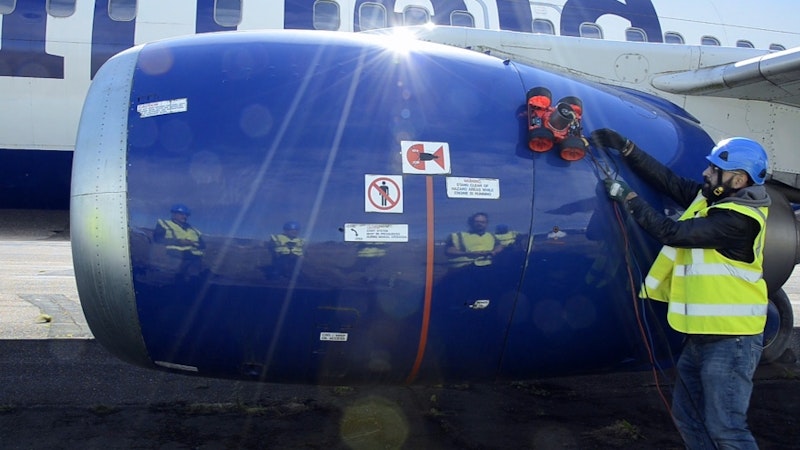 A prototype robot that uses intense suction to climb around the outside of aircraft and inspect them for damage has successfully been trialled at Cranfield University. For more information see the IDTechEx report on Mobile Robots and Drones in Material Handling and Logistics 2018-2038.
The four-wheeled Vortex Robot, developed as part of the CompInnova project, was tested in field trials using Cranfield's Boeing 737 and was able to stick to and move around the sides and underbelly of the plane.
Structural inspection of aircraft components is currently done manually, making it time-consuming, subject to human error, and costly, with aircraft maintenance expenditure usually representing 20% of overall operating costs.
Professor Iain Gray, Director of Aerospace at Cranfield University and Principal Investigator of the project said: "There is an increasing use of composites throughout large and small aircraft structures. Developing new, efficient, modern ways to inspect those composites is a real key performance driver."
Georgios Andrikopoulos, post-doctoral researcher at Lulea University of Technology, who is leading the development of the Vortex platform, said: "We successfully tested the capabilities of the robot prototype on all different surfaces of the airplane, even the transition beneath the wing and fuselage. This is really challenging to accomplish because the robot will have to support a big payload in relation to its size."
An autonomous version of the robot equipped with sensors for inspection and tools for repair is now being developed by the project team and could carry a payload of around 9kg, including ultrasonic and thermal imaging cameras for detecting damage, and a laser to remove and repair it.
The ultimate plan is for teams of robots to work collaboratively, improving speed and efficiency further.
The CompInnova project involves five partners from across Europe and has received funding from the European Union's H2020 Framework Programme.
Source and top image: Cranfield University