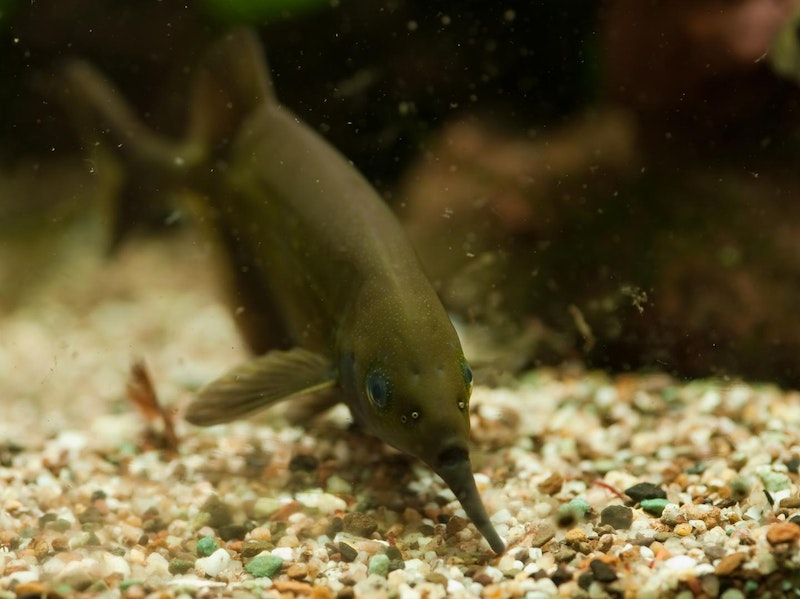 When dealing with disasters or searching for objects, robots or drones with cameras are usually used. However, conventional cameras are of rather limited use in murky, dark water, such as in a sewage pipe or a lake that is cloudy with sediment. Zoologists at the University of Bonn have now developed a special camera for such operating conditions: Modeled on the African elephantnose fish (Gnathonemus petersii), it supplies "electric images" with "electric colors" in murky waters. For more information see the IDTechEx report on Mobile Robots and Drones in Material Handling and Logistics 2018-2038.
Elephantnose fish are nocturnal and therefore cannot rely on their eyes when hunting for prey. With an electric organ in their tail they generate short electrical pulses up to 80 times per second. Electroreceptor organs in their skin and especially on their trunk-like chin measure how the pulses are modulated by the environment. With this electro-sense the fish can estimate distances, perceive shapes and materials and even distinguish between living and dead objects. In fractions of a second, they use the electrical pulses to detect where mosquito larvae, their favorite prey, hide at the bottom of their habitat.
The researchers around Prof. Dr. Gerhard von der Emde from the Institute of Zoology of the University of Bonn have been investigating for many years how the strange electrosensitivity of African Elephantnose fish works. The fish use two different types of electro-receptors for "active electrolocation". One only measures the intensity of the signal, the other the waveform of the pulse. "We were recently able to show that the fish uses the ratio of the two readings to identify its prey," reports von der Emde. This creates "electric colors" analogous to visual colors perceived by the human eye, but through electrical signals instead of visible light.
Prof. Gerhard von der Emde, doctoral student Martin Gottwald and Dr. Hendrik Herzog from the Institute of Zoology at the University of Bonn used their findings from their basic research on the Elephantnose fish to develop a first camera prototype based on the model of this active electrolocation. "With this 'bionic' electric camera it is possible to shoot 'electric images' of objects without any light, even in a murky environment, which also allow an analysis of the electrical and spatial properties of the objects depicted," reports von der Emde.
Like the Elephantnose fish, the camera generates a weak electric field around itself and captures the electric images of objects in its environment with several sensors (electrodes) on its surface. As the researchers report, various natural objects, such as fish, plants or wood, as well as artificial test objects, such as spheres or rods made of aluminum or plastic, were measured and characterized by the camera in this way. "The same analytical parameters used by Elephantnose fish during active electrolocation were used for this," says Dr. Hendrik Herzog. For example, the distance to the object could be determined by the degree of image blur.
Animated objects, such as fish and plants, produced different "electric colors" - exactly how they are also recognized by electric fish. "Supplementary evaluations showed that the electrical images could also be used to determine 'electrical outlines' of the measured objects, which, similar to their optical contours, can provide information about shape and orientation," reports lead author Martin Gottwald. In contrast to visual measurements, all these electrical image parameters are not affected by a cloudy or dark environment. Where conventional eyes or camera systems fail, the electric camera allows an unclouded view.
The results of the study show that bionic methods could be used to develop novel electrical camera systems that facilitate, for example, robot- or drone-based inspections in murky waters. In addition, the scientists see many other applications for electric cameras, including material control, device monitoring and medical applications. Furthermore, the electric camera can also support basic biological research and help to improve understanding of active electrolocation of weakly electric fish.
Source and top image: University of Bonn
Learn more at the next leading event on the topic: Sensors Europe 2020