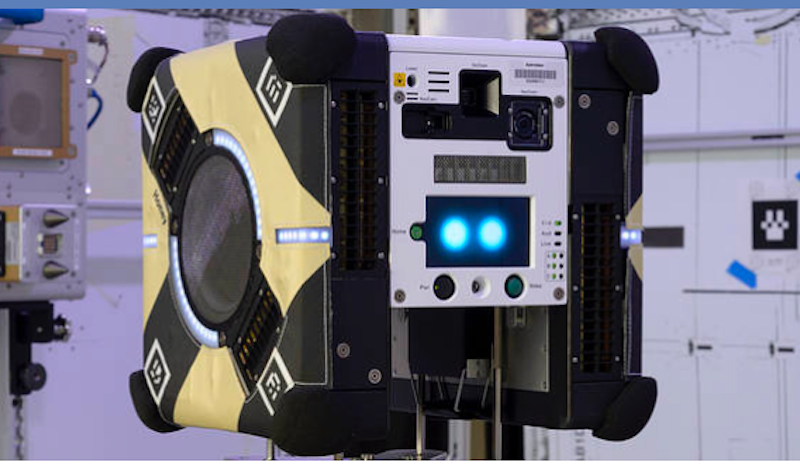 Bees are known to be both busy and hard-working, and NASA's new free-flying space robots, called Astrobee, will soon have the same reputation. Unlike bees that live on Earth, the robots will do their work flying alongside astronauts inside the International Space Station and will play a critical role in supporting innovative and sustainable exploration of the Moon, Mars and beyond. For more information see the IDTechEx report on Mobile Robots and Drones in Material Handling and Logistics 2018-2038.
Astrobee is a free-flying robot system that will provide a research platform for the orbiting laboratory. The system includes three robots—named Honey, Queen and Bumble— as well as a docking station for recharging. The first two robots were launched to the station on April 17 aboard Northrop Grumman's 11th Commercial Resupply Services mission from NASA's Wallops Flight Facility in Virginia.
"The main purpose of the Astrobee platform is to provide a zero-gravity testbed for guest scientists to try out new robotic technologies in space," said Maria Bualat, Astrobee project manager at NASA's Ames Research Center in California's Silicon Valley. "Astrobee will prove out robotic capabilities that will enable and enhance human exploration. Performing such experiments in zero gravity will ultimately help develop new hardware and software for future space missions."
Astrobee has a highly modular hardware and software design that makes it possible for the robot to do a wide range of tasks or experiments - even things that have not yet been imagined. Each robot has three payload bays, attachment points for which station crew can easily install new hardware modules. Software modules can be installed while the robots are connected to Astrobee's docking station, located in the Kibo module of the space station. Astrobee's software was released by NASA as open-source to encourage development and testing of new algorithms and features.
Astrobees Will Have an Air About Them, Literally
Propelled by electric fans, the robots can fly and navigate autonomously inside the space station using their built-in software and six cameras. Designed to assist astronauts, softly humming as they go, the Astrobees will do housekeeping chores, such as monitoring equipment and performing inventory, freeing up valuable astronaut time for research work or other tasks.
The robots can fly solo, going about their business independently or they can be managed by astronauts or flight controllers. Equipped with cameras, a microphone and other sensors, they provide flying "eyes" and "ears" that will allow flight controllers to remotely monitor conditions and remotely perform work on the station from the ground.
About two weeks after Astrobee robots arrive on the space station, NASA will begin a series of commissioning activities, testing and tuning the robots to work well in the space station and in zero gravity. After station crew unpack the first robot, they will inspect it and verify that all of the subsystems are working properly. Then, the crew will help the Astrobee team calibrate the robot's cameras and inertial sensors.
The Astrobee team will make their first attempt at flying a robot about six weeks after arrival. NASA will then conduct a series of tests of autonomous undocking and docking and more complex Astrobee operations. Commissioning of the entire system is expected to be complete by fall 2019.
Astrobee builds upon technology and lessons learned from the Synchronized Position Hold, Engage, Reorient, Experimental Satellite system, which is currently operated as a research platform on the space station. Once the Astrobee system has been fully commissioned, it will take over from SPHERES in this role. Many scientists and engineers are already developing payloads and initial experiments with Astrobee. These are anticipated to start in 2020.
Just as bees contribute to Earth's ecosystem in numerous ways, Astrobee will contribute to the development of new capabilities for future exploration missions. Astrobee will be used to test how robots can assist crew and perform caretaking duties for human spacecraft. This will increase astronaut productivity and even help maintain spacecraft when astronauts are not present near the Moon, Mars or other deep-space outposts.
Ames began developing the Astrobee system in 2014 as part of the NASA Human Exploration Telerobotics 2 project. NASA's Johnson Space Center in Houston conducted environmental testing of the system. NASA's Jet Propulsion Laboratory in Pasadena, California, provided software development support. Astrobee is funded by the Game Changing Development program within NASA's Space Technology Mission Directorate and the SPHERES facility supported by the Human Exploration and Operations Mission Directorate.
Source and top image: NASA

How Is COVID-19 Shaping the Future Mobility Landscape?
How does artificial intelligence detect disease from medical scans?
The various forms of medical imaging & how AI can enhance them
Webinar - Autonomous Driving: Peak Car to Arrive as Early as 2031?