Artificial metabolism could open a new frontier in robotics 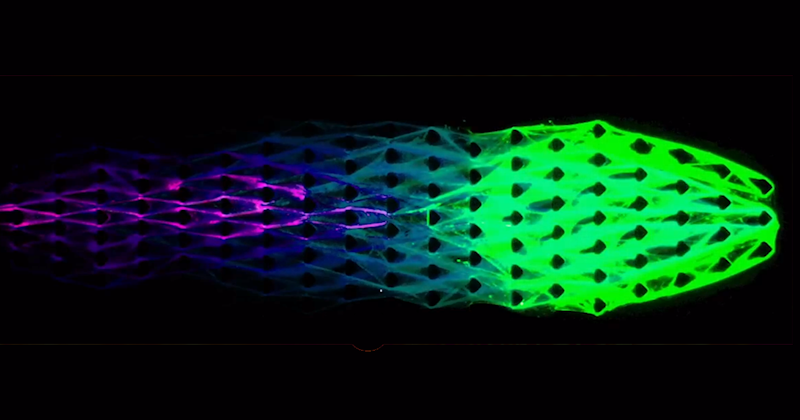 As a genetic material, DNA is responsible for all known life. But DNA is also a polymer. Tapping into the unique nature of the molecule, Cornell engineers have created simple machines constructed of biomaterials with properties of living things. Using what they call DASH (DNA-based Assembly and Synthesis of Hierarchical) materials, Cornell engineers constructed a DNA material with capabilities of metabolism, in addition to self-assembly and organization - three key traits of life. For more information see the IDTechEx report on New Robotics and Drones 2018-2038.
"We are introducing a brand-new, lifelike material concept powered by its very own artificial metabolism. We are not making something that's alive, but we are creating materials that are much more lifelike than have ever been seen before," said Dan Luo, professor of biological and environmental engineering in the College of Agriculture and Life Sciences.
For any living organism to maintain itself, there must be a system to manage change. New cells must be generated; old cells and waste must be swept away. Biosynthesis and biodegradation are key elements of self-sustainability and require metabolism to maintain its form and functions. Through this system, DNA molecules are synthesized and assembled into patterns in a hierarchical way, resulting in something that can perpetuate a dynamic, autonomous process of growth and decay.
Using DASH, the Cornell engineers created a biomaterial that can autonomously emerge from its nanoscale building blocks and arrange itself - first into polymers and eventually mesoscale shapes. Starting from a 55-nucleotide base seed sequence, the DNA molecules were multiplied hundreds of thousands times, creating chains of repeating DNA a few millimeters in size. The reaction solution was then injected in a microfluidic device that provided a liquid flow of energy and the necessary building blocks for biosynthesis. As the flow washed over the material, the DNA synthesized its own new strands, with the front end of the material growing and the tail end degrading in optimized balance. In this way, it made its own locomotion, creeping forward, against the flow, in a way similar to how slime molds move.
The locomotive ability allowed the researchers to pit sets of the material against one another in competitive races. Due to randomness in the environment, one body would eventually gain an advantage over the other, allowing one to cross a finish line first.
"The designs are still primitive, but they showed a new route to create dynamic machines from biomolecules. We are at a first step of building lifelike robots by artificial metabolism," said Shogo Hamada, lecturer and research associate in the Luo lab, and lead and co-corresponding author of the paper. "Even from a simple design, we were able to create sophisticated behaviors like racing. Artificial metabolism could open a new frontier in robotics."
The engineers are currently exploring ways to have the material recognize stimuli and autonomously be able to seek it out in the case of light or food, or avoid it if it's harmful. The programmed metabolism embedded into DNA materials is the key innovation. The DNA contains the set of instructions for metabolism and autonomous regeneration. After that, it's on its own.
"Everything from its ability to move and compete, all those processes are self-contained. There's no external interference," Luo said. "Life began billions of years from perhaps just a few kinds of molecules. This might be the same."
The material the team created can last for two cycles of synthesis and degradation before it expires. Longevity can likely be extended, according to the researchers, opening the possibility for more "generations" of the material as it self-replicates. "Ultimately, the system may lead to lifelike self-reproducing machines," Hamada said.
"More excitingly, the use of DNA gives the whole system a self-evolutionary possibility," Luo said. "That is huge."
Theoretically, it could be designed so that subsequent generations emerge within seconds. Reproduction at this hyper pace would take advantage of DNA's natural mutational properties and speed the evolutionary process, according to Luo. In the future, the system could be used as a biosensor to detect the presence of any DNA and RNA. The concept also could be used to create a dynamic template for making proteins without living cells.
Source and top image: Cornell University

How Is COVID-19 Shaping the Future Mobility Landscape?
How does artificial intelligence detect disease from medical scans?
The various forms of medical imaging & how AI can enhance them
Webinar - Autonomous Driving: Peak Car to Arrive as Early as 2031?