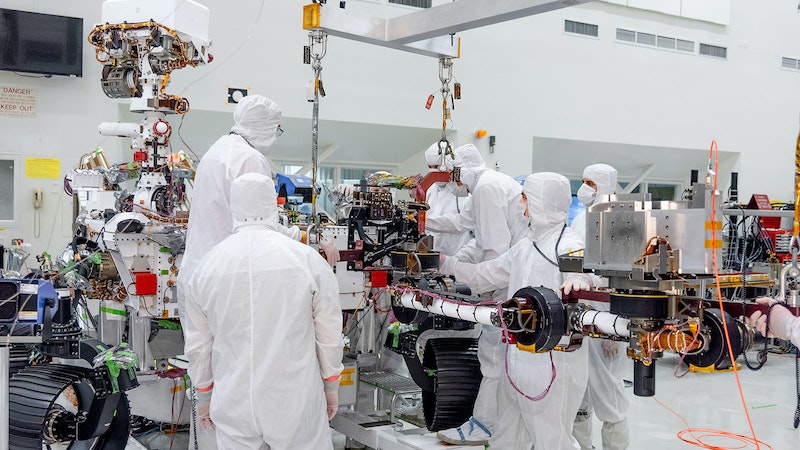 In the above image, engineers at NASA's Jet Propulsion Laboratory in Pasadena, California, install the main robotic arm on the Mars 2020 rover. (A smaller arm to handle Mars samples will be installed inside the rover as well.) The main arm includes five electrical motors and five joints (known as the shoulder azimuth joint, shoulder elevation joint, elbow joint, wrist joint and turret joint). Measuring 7 feet (2.1 meters) long, the arm will allow the rover to work as a human geologist would: by holding and using science tools with its turret, which is essentially its "hand." For more information see the IDTechEx report on Mobile Robots and Drones in Material Handling and Logistics 2018-2038.
"You have to give a hand to our rover arm installation team," said Ryan van Schilifgaarde, a support engineer at JPL for Mars 2020 assembly. "They made an extremely intricate operation look easy. We're looking forward to more of the same when the arm will receive its turret in the next few weeks."
The rover's turret will include high-definition cameras, science instruments, and a percussive drill and coring mechanism. Those tools will be used to analyze and collect samples of Martian rock and soil, which will be cached on the surface for return to Earth by a future mission.
Mars 2020 will launch from Cape Canaveral Air Force Station in Florida in July of 2020. It will land at Jezero Crater on Feb. 18, 2021.
Charged with returning astronauts to the Moon by 2024, NASA's Artemis lunar exploration plans will establish a sustained human presence on and around the Moon by 2028. The NASA team will use what it learns on the Moon to prepare to send astronauts to Mars.
Jet Propulsion Laboratory is building and will manage operations of the Mars 2020 rover for the NASA Science Mission Directorate at the agency's headquarters in Washington.
Source and top image: NASA
Learn more at the next leading event on the topic: Sensor Innovations Europe 2020