Toyota Motor Corporation, as a worldwide partner of the Olympic and Paralympic Games, aims to provide mobility solutions that go beyond providing official vehicles for the Olympic and Paralympic Games Tokyo 2020. One way Toyota is doing this is by participating in the "Tokyo 2020 Robot Project", a project led by the Tokyo Organising Committee of the Tokyo 2020 Games that brings the government, Tokyo Metropolitan government, as well as Games' partners together with experts in the field of robotics. At Tokyo 2020, the robots to be introduced by Toyota will be used to support the mobility of people at various locations and venues. By helping people feel and experience their hopes and dreams, Toyota believes it will be able to further contribute to the excitement and success of the Tokyo 2020 Games. For more information see the IDTechEx report on Mobile Robots and Drones in Material Handling and Logistics 2018-2038.
Nobuhiko Koga, Chief Officer of Toyota's Frontier Research Center, said: "At Toyota, we use industrial robot technology for a variety of applications based on our dedication to 'Supporting human life activities and living in harmony with people'. For example, since 2004, we have developed partner robots focused on support for people unable to move on their own, including the aging population. Now, as we transform into a mobility company, we are expanding our robotics efforts to provide all people with the freedom to move. 'Mobility for all' is not only the 'physical' movement of a person or thing from one location to another, but also includes 'virtual' mobility of a person. This provides further opportunities to experience new things, meet and interact with others, or to be 'moved' emotionally. At Tokyo 2020, we want to capture the imagination of spectators by providing support robots as we do our part to make the Games a success."
Tokyo 2020 Mascot Robots Miraitowa and Someity
Tokyo 2020 Games and Toyota are working to develop a "mascot robot". In addition to welcoming athletes and guests to official venues, Toyota is currently considering plans for a new way for the Games to be enjoyed by children in Japan, via the mascot robot. The mascot robot will both allow expressions of arm movements via a remote-location robot, and share force-feedback from interactions. Via a camera mounted on the robot's head, it can recognize people nearby, and once recognized, use its eyes to respond with/show a variety of expressions. By equipping the robot with miniature joint units across its entire body, the robot offers flexibility when being controlled, and the users can operate the robot safely and with high operational functionality. 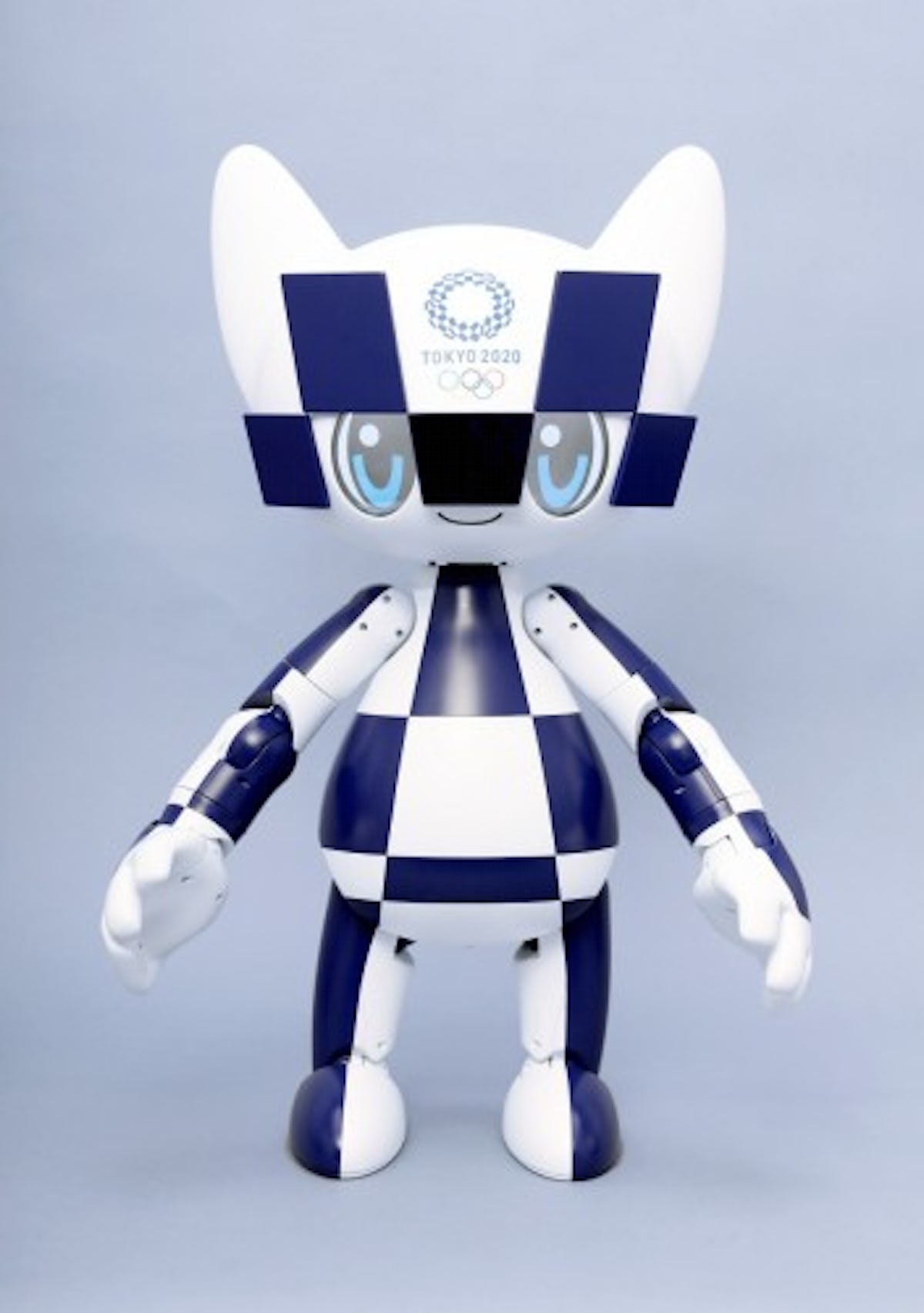 T-HR3 (Humanoid Robot)
Toyota will provide a unique way for other guests in remote/distant locations that are unable to be physically present to interact with athletes via the T-HR3 and Mascot robots. Specifically, the T-HR3 robots will be able to reproduce movement from a mascot robot in a remote location in nearly real-time. In addition to providing images and sounds from the remote locations, these robot users will also be able to experience the power of movement and force-feedback, allowing them to converse with and high-five athletes and others, feeling as if they were truly physically present. 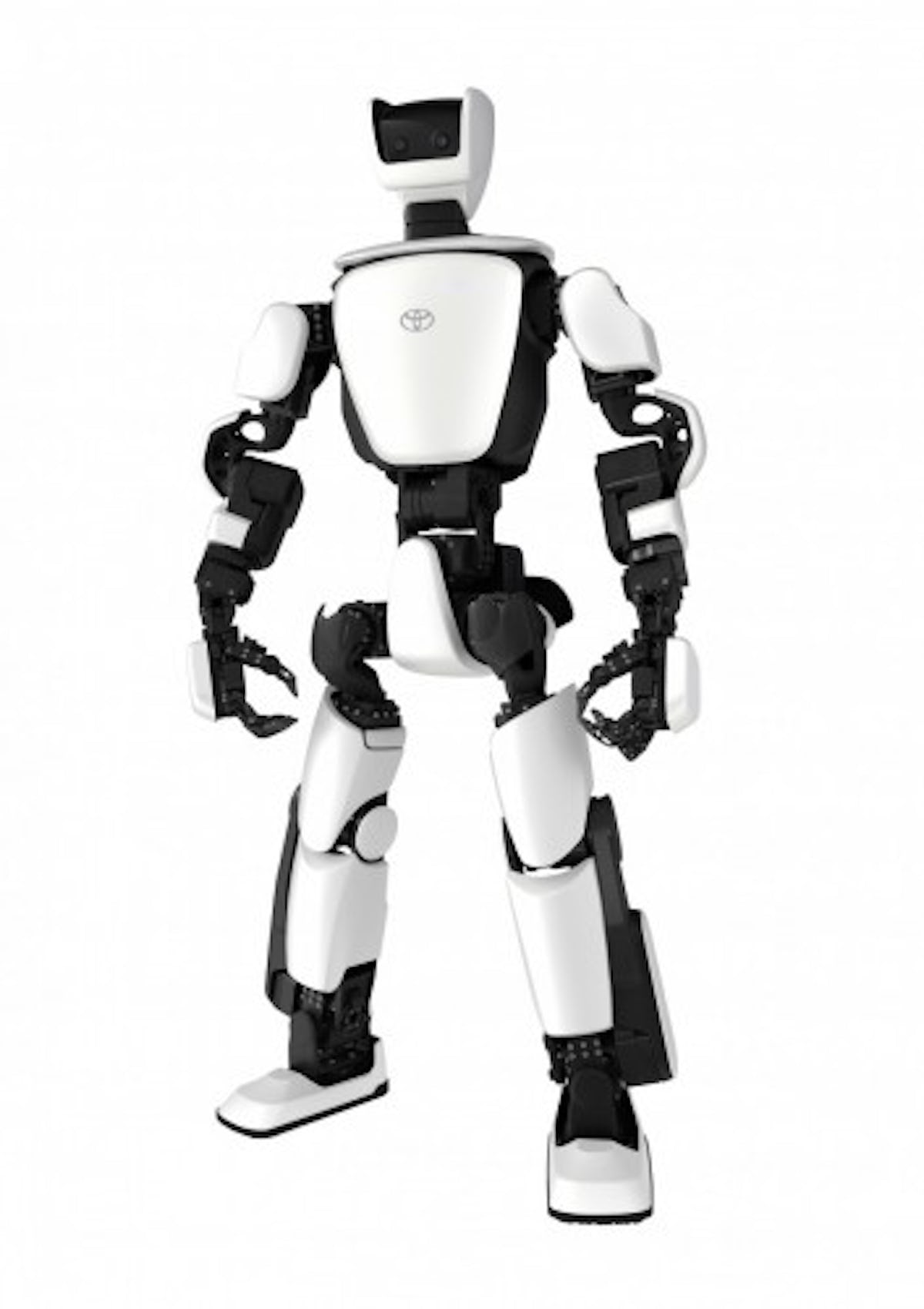 T-TR1 (Remote location communication Robot)T-TR1 (Remote location communication Robot)
T-TR1 is a virtual mobility/tele-presence robot developed by Toyota Research Institute in the United States. It is equipped with a camera atop a large, near-lifesize display. By projecting an image of a user from a remote location, the robot will help that person feel more physically present at the robot's location. With T-TR1, Toyota will give people that are physically unable to attend the events such as the Games a chance to virtually attend, with an on-screen presence capable of conversation between the two locations. 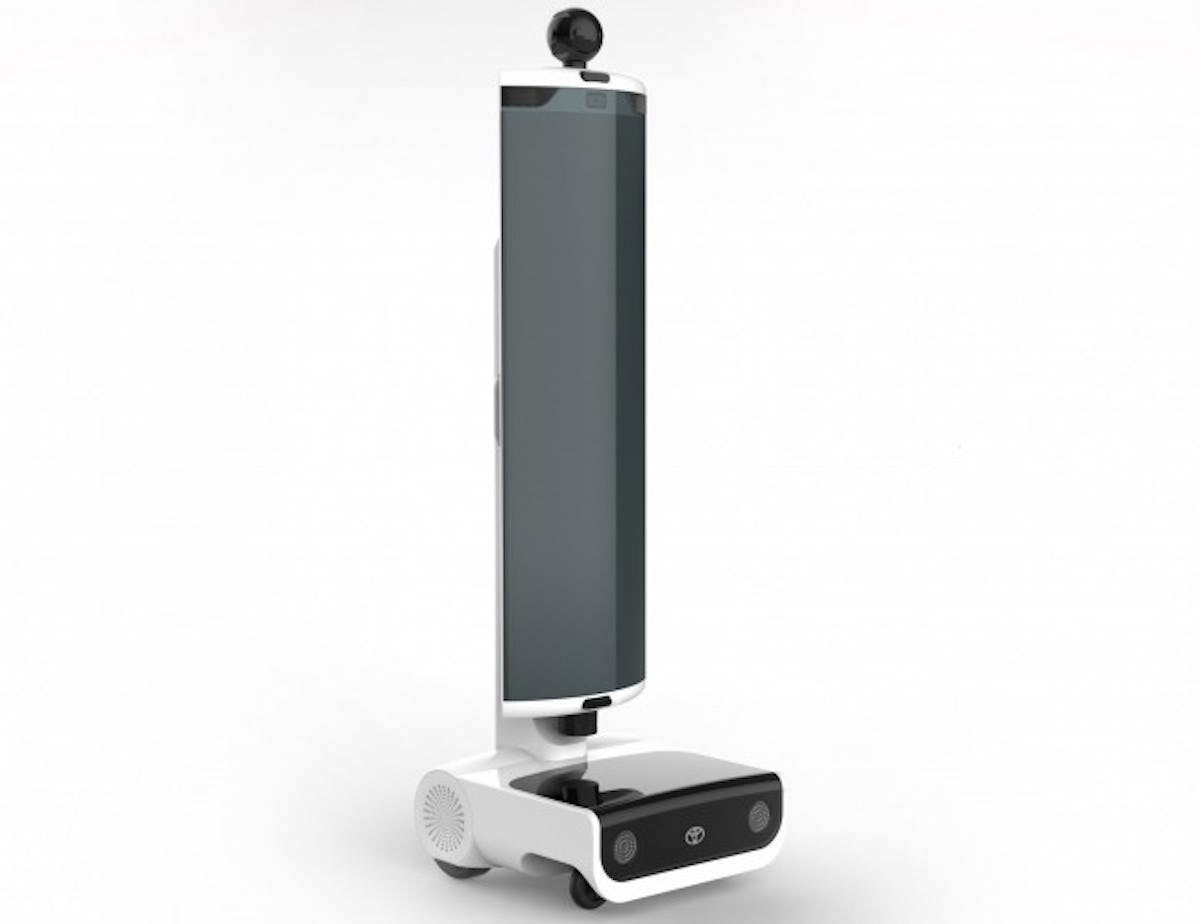 HSR: Human Support Robot / DSR: Delivery Support Robot
For a portion of the accessible seating seats at the Olympic Stadium, the Toyota Human Support Robot HSR will guide guests to their seat and convey light meals, goods, and etc. for them. Also, the Toyota Deliver Support Robot DSR, specially developed for Tokyo 2020, will directly deliver drinks and other goods to spectators that they have ordered from a dedicated tablet. At track and field events, with approx. 500 seats during the Olympic Games and another 500 for the Paralympic Games, the robots are anticipated to serve over 1,000 spectators requiring mobility assistance (Each section is expected to have 16 rows with 32 seats). 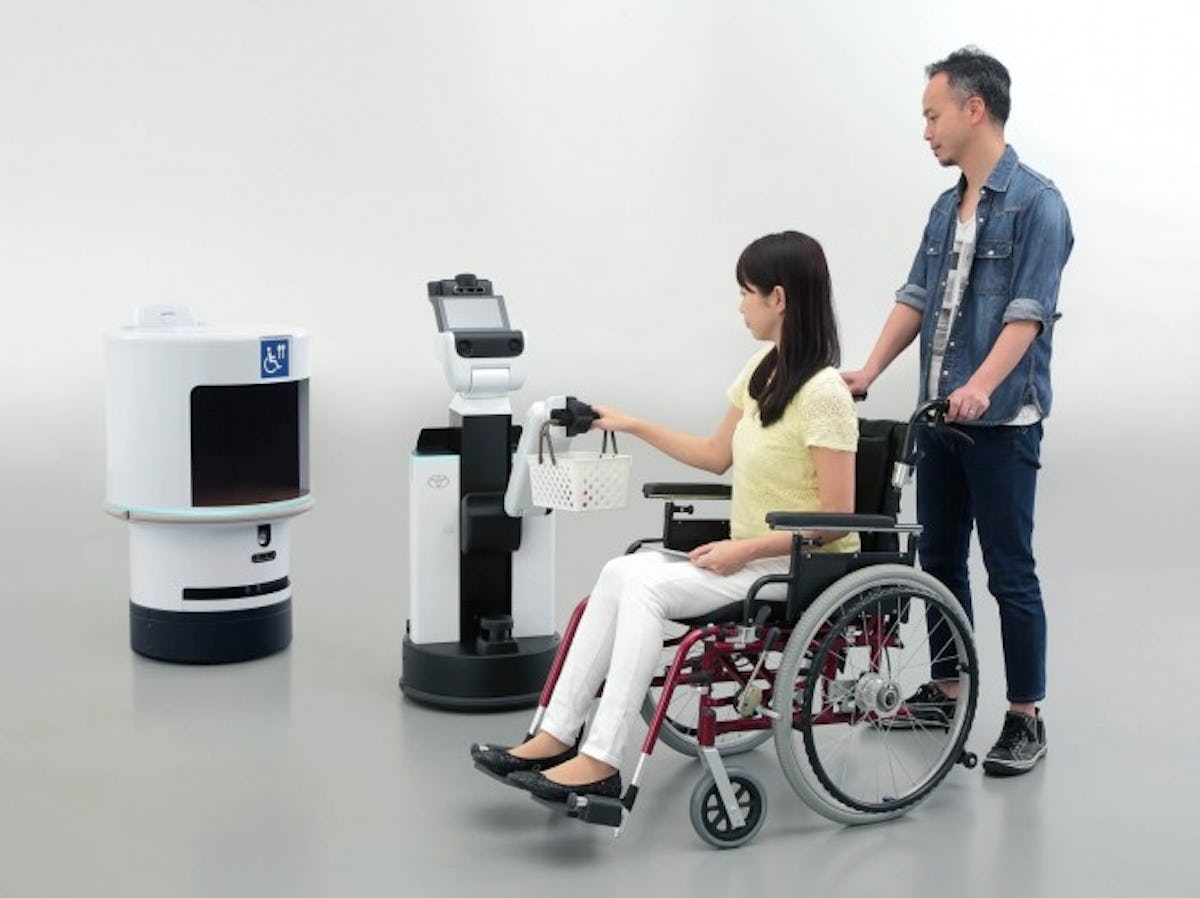 FSR: Field Support Robot (Field Event Support Robot)
Special-use robots equipped with autonomous functions as part of throwing event (i.e. javelin) operations at the Olympic Stadium. While determining the optimal route to travel, the FSR will follow operating staff on a path that avoids obstacles while retrieving and conveying throwing event items. By using the FSR, the aim is to reduce the amount of time needed to retrieve items as well as reduce the amount of staff labor for the events. Toyota and Tokyo 2020 will be working with the International Association of Athletics Federations (IAAF) in developing the FSR for the Tokyo 2020 Games. 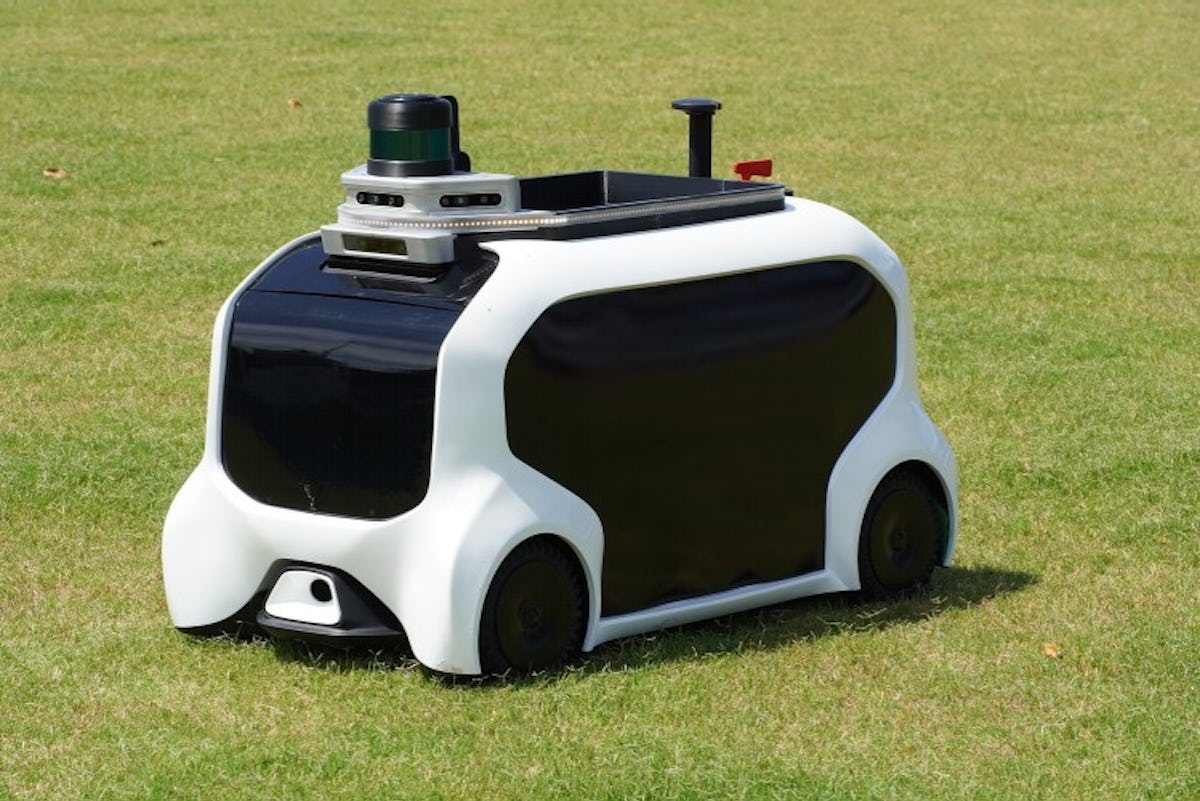