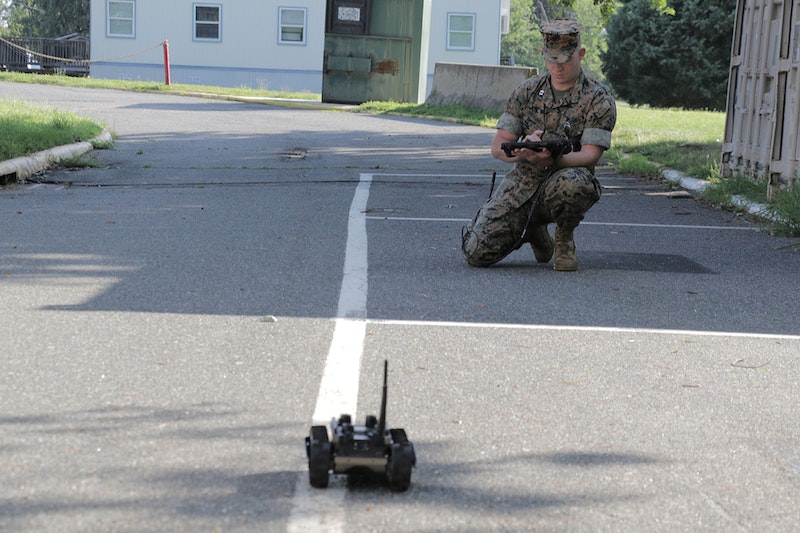 The US Marine Corps is in the process of fielding the Ultra-Light Robot—a small, mobile robot system that enables Explosive Ordnance Disposal Marines to interrogate improvised explosive devices and other explosive threats or conduct various other reconnaissance activities. For more information see the IDTechEx report on Mobile Robots and Drones in Material Handling and Logistics 2018-2038.
"The primary purpose of the Ultra-Light Robot is for small activities for Recon Marines," said Benjamin Im, lead engineer for the Unmanned Ground Vehicle System's EOD team at Marine Corps Systems Command (MCSC). "It can enter areas where our Marines or bigger robots cannot."
About the size of a shoe box, the Ultra-Light Robot includes a camera that provides a live feed to explore dangerous areas and can attach a manipulator arm or dump tray to assist in carrying out its mission. Its diminutive size—roughly 10 pounds—enables EOD technicians to carry it in a backpack on the battlefield. "A Marine can easily carry the Ultra-Light Robot around," said Capt. Andrew DeLannoy, EOD team project officer at MCSC. "This is going to be a great reconnaissance asset."
The robot reduces a Marine's risk of danger. For example, a warfighter can toss the system through a second-floor window to gain intelligence; instead of walking into the building and increasing his or her chances of activating an IED, said DeLannoy.
"If a Marine wants to see what's over a wall, they can throw it over the structure to see what's going on," said Ronald Diefenbach, program analyst for Program Management Office Engineer Systems at MCSC. "This further minimizes risk to the warfighter."
The Ultra-Light Robot can also be controlled at greater distances when partnered with other systems like the EOD Mini-Robot. If an IED or unexploded ordnance exists in a specific location down the road, EOD forces can employ the robot to approach the target and avoid compromising a Marine's safety, said Im. The machine can also communicate with larger robots with similar radio systems. EOD techs can use a single controller to operate multiple robots, increasing efficiency on the battlefield. If communication with a robot is lost, the Marine can send in a second one to reconnect with that first robot, and then go explore deeper areas.
"This system includes a capability to mesh radio networks with other robots, which is an advantage because it helps Marines carry out their missions over extended ranges," said Diefenbach.
Those involved in developing the Ultra-Light Robot particularly marvel at the system's durability. The machine can be submerged in water, dropped from a two-level building or thrown over a compound wall. The system's track allows the robot to continue operating even when flipped on its top. Diefenbach said the system is designed to withstand a beating, while Im called it "one of the most durable robots" operated by MCSC.
"The robot will be thrown over barriers, walls, roofs and peaks," said Im. "It'll be used to see over certain areas while the Marine is at a standoff distance from the potential hazard or threat."
As enemy forces continue to enhance their technologies, the Corps has made a concerted effort to leverage innovative technologies to benefit the warfighter. Employing a durable robot system that can monitor tight quarters or unexplored areas ultimately helps Marines combat threats and meet the future fight, said Diefenbach.
"As past military leaders have said, Marines go out there to win battles—and we plan to support them," said Diefenbach. "That's why we provide these capabilities."
Source and top image: US Navy
Learn more at the next leading event on the topic: Sensors Europe 2020