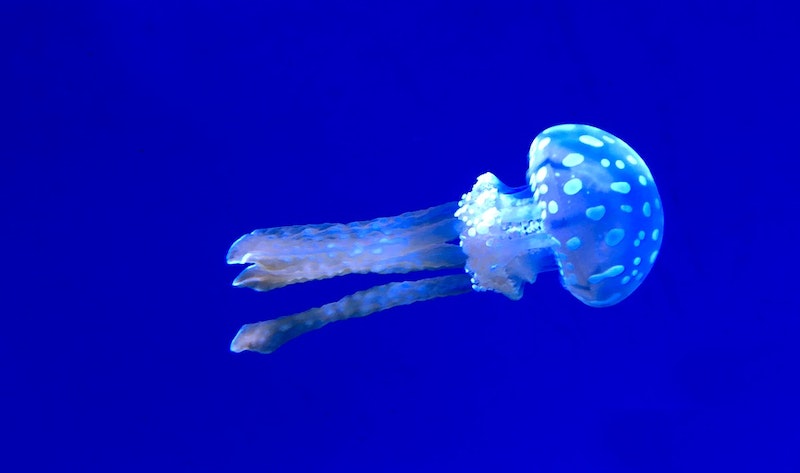 As a source of inspiration, aquatic creatures such as fish, cetaceans, and jellyfish could inspire innovative designs to improve the ways that manmade systems operate in and interact with aquatic environments. Jellyfishes in nature propel themselves through their surroundings by radially expanding and contracting their bell-shaped bodies to push water behind them, which is called jet propulsion. For more information see the IDTechEx report on Mobile Robots and Drones in Material Handling and Logistics 2018-2038.
Contrary to prevailing view that jellyfishes are described as inefficient swimmers, jellyfishes have been proven to be one of the most energetically efficient swimmers. That is, it indicates that jellyfish-like swimming will have a remarkable propulsive advantage if low-energy propulsion is demanded. Therefore, the movements of jellyfish have attracted significant interest over the past decade in the context of bioinspired underwater vehicle.
Recently, researchers from Institute of Automation, Chinese Academy of Sciences in Beijing, China successfully developed a novel robotic jellyfish able to perform three-dimensional jellyfish-like propulsion and maneuvers based on a reinforcement learning-based method.
Combining the latest advancements in mechatronic design, materials, electronics, and control methods, researchers are making an integrated effort to develop smart actuators to fabricate various robotic jellyfishes. In generally, such robotic jellyfishes are often tethered and much slower in speed in comparison with the kind actuated by conventional electric motors. Most of existing robotic jellyfishes cannot freely adjust their three-axis attitude, which has an adverse effect on free-swimming propulsion and plausible applications.
To solve this problem, the research group led by Prof. Junzhi Yu from Institute of Automation, Chinese Academy of Sciences has investigated how a bioinspired motor-driven jellyfish-like robotic system capable of 3D motion is designed and controlled.
The designed robotic jellyfish models after Aurelia aurita (commonly termed moon jellyfish), which has a relatively large displacement and is especially suited for use with large load capacity. It is about 138 mm height and weights about 8.2 kg. As illustrated in Figure 1, the robotic jellyfish is hemispherical in shape and consists of a bell-shaped rigid head, a cylindroid main cavity, four separate six-bar linkage mechanisms, and a soft rubber skin. To enhance the maneuverability of the robotic jellyfish, a barycenter adjustment mechanism assembled inside the cavity is introduced. Through adjusting two clump weights in vertical or horizontal direction or in a combination of the two, the attitude regulation is achieved.
"It is very hard to establish a precise dynamic model for jellyfish-like swimming, since it is a highly nonlinear, strong coupling, and time-varying system." said by Prof. Junzhi Yu. "Parametric uncertainties and external disturbances in dynamic aquatic environments, at the same time, cause difficulty in deriving control laws by solving the inverse kinematics problem." Therefore, a reinforcement learning based closed-loop attitude control method is proposed for the robotic jellyfish, which can solve optimal decision control problem through direct interaction with the environment, particularly without the need for dynamic modeling.
Finally, the proposal of the reinforcement learning based attitude control method makes autonomous attitude regulation possible. "In comparison with most of the other robotic jellyfish, the built robot displays a high order of structure flexibility and yaw maneuverability." Pointed out by Prof. Junzhi Yu. He also stressed that this self-propelled robotic jellyfish with 3D motion has great implications for bioinspired design of jet propulsion system with great agility.
Source: Science China Press
Top image: Pixabay

Key Sensor Trends as Industries Evolve
Join the Webinar "Materials Informatics - Do Not Miss the Revolution"
Robot can Disinfect a Warehouse Floor in Half an Hour
Join the Webinar - Battery Electric Buses: Beyond China 14th July