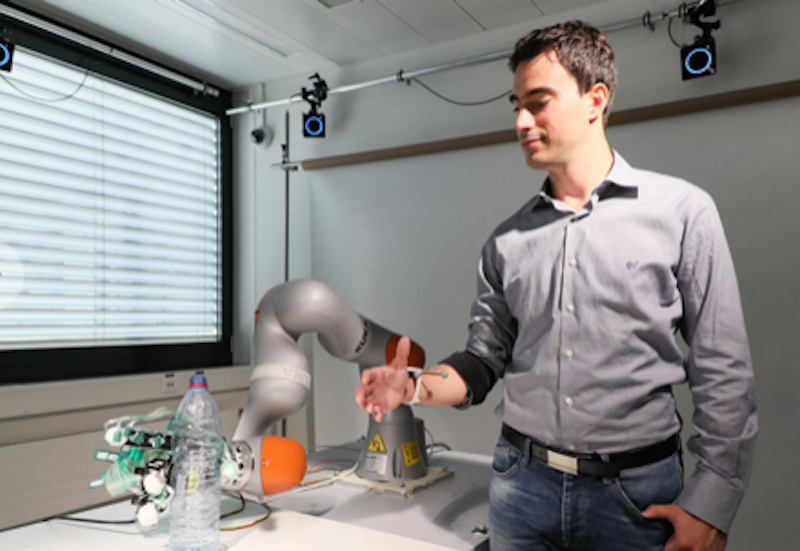 EPFL scientists are developing new approaches for improved control of robotic hands - in particular for amputees - that combines individual finger control and automation for improved grasping and manipulation. This interdisciplinary proof-of-concept between neuroengineering and robotics was successfully tested on three amputees and seven healthy subjects. The results are published in today's issue of Nature Machine Intelligence. For more information see the IDTechEx report on Neuroprosthetics 2018-2028: Technologies, Forecasts, Players.
The technology merges two concepts from two different fields. Implementing them both together had never been done before for robotic hand control, and contributes to the emerging field of shared control in neuroprosthetics.
One concept, from neuroengineering, involves deciphering intended finger movement from muscular activity on the amputee's stump for individual finger control of the prosthetic hand which has never before been done. The other, from robotics, allows the robotic hand to help take hold of objects and maintain contact with them for robust grasping.
"When you hold an object in your hand, and it starts to slip, you only have a couple of milliseconds to react," explains Aude Billard who leads EPFL's Learning Algorithms and Systems Laboratory. "The robotic hand has the ability to react within 400 milliseconds. Equipped with pressure sensors all along the fingers, it can react and stabilize the object before the brain can actually perceive that the object is slipping. "
How shared control works
The algorithm first learns how to decode user intention and translates this into finger movement of the prosthetic hand. The amputee must perform a series of hand movements in order to train the algorithm that uses machine learning. Sensors placed on the amputee's stump detect muscular activity, and the algorithm learns which hand movements correspond to which patterns of muscular activity. Once the user's intended finger movements are understood, this information can be used to control individual fingers of the prosthetic hand.
"Because muscle signals can be noisy, we need a machine learning algorithm that extracts meaningful activity from those muscles and interprets them into movements," says Katie Zhuang first author of the publication.
Next, the scientists engineered the algorithm so that robotic automation kicks in when the user tries to grasp an object. The algorithm tells the prosthetic hand to close its fingers when an object is in contact with sensors on the surface of the prosthetic hand. This automatic grasping is an adaptation from a previous study for robotic arms designed to deduce the shape of objects and grasp them based on tactile information alone, without the help of visual signals.
Many challenges remain to engineer the algorithm before it can be implemented in a commercially available prosthetic hand for amputees. For now, the algorithm is still being tested on a robot provided by an external party.
"Our shared approach to control robotic hands could be used in several neuroprosthetic applications such as bionic hand prostheses and brain-to-machine interfaces, increasing the clinical impact and usability of these devices," Silvestro Micera, EPFL's Bertarelli Foundation Chair in Translational Neuroengineering, and Professor of Bioelectronics at Scuola Superiore Sant'Anna.
Source and top image: EPFL
Learn more at the next leading event on the topic: Sensors Europe 2020