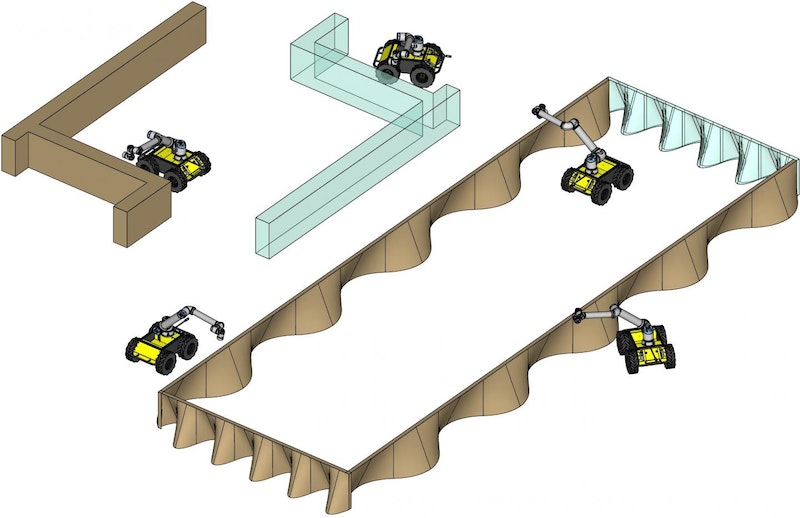 Commercial 3D printing -- or additive manufacturing -- is a booming industry. But if printers were liberated from the typical setup involving an immobile box and a gantry, and set free to work in roving, collaborative teams, the AM business might be much bigger with many more applications, including as robotic masons at construction sites and repairing crumbling urban and rural civil infrastructure. For more information see the IDTechEx repair ton 3D Printing 2019-2029: Technology and Market Analysis.
A multidisciplinary robotics team at the NYU Tandon School of Engineering, hosted by NYU's Center for Urban Science and Progress and supported by a $1.2 million grant from the National Science Foundation, is working to make the concept a reality by designing autonomous systems for 3D printers on robotic arms attached to mobile, roving platforms. Functioning in teams -- a concept called collective additive manufacturing (CAM) -- these printers, with machine learning and other artificial intelligence capabilities, could repair bridges, tunnels and other civic structures; work in ocean depths and disaster zones; or even head to space to work on the Moon, Mars, and beyond.
The researchers, Chen Feng, Maurizio Porfiri, Ludovic Righetti, and Weihua Jin, professors in the Departments of Civil and Urban Engineering, Mechanical and Aerospace Engineering, and Electrical and Computer Engineering, will focus on three areas critical to making 3D-printing CAM teams viable: autonomy, control, real-time systems and networking:
Feng explained that the goal is for accuracy, efficiency, and adaptability to the environment and to real-time conditions -- rather the way a navigation app reroutes a vehicle that it senses has veered from a mapped course. Unlike the typical GPS-based navigation service, however, the adjustments must be lightning-fast and accurate to a few millimeters, not a few dozen feet. He added that the team's unique combination of expertise in robotics, artificial intelligence, control theory, and dynamical systems make the challenges surmountable.
Feng will focus on planning and localization, tackling such challenges as how to enable the robot to identify when and when it does not need a high degree of precision in localizing itself.
"The robot must be able to move quickly to the printing area, observe the real conditions -- such as uneven ground, since the real world isn't planar -- then make compensations immediately," he said. "And while we want to have a higher degree of accuracy in the structure area, the further you are from structure the less you need," he explained. "This will involve a new kind of proactive localization."
Righetti will work on real-time optimal control algorithms of each mobile printers, to allow the robot to adapt quickly to the environment.
"Each robot has to observe what is being printed, autonomously associate it with the project design, and recognize instantly if the printed structure has deviated from it, and by how much, and all the while decide what are the next best actions to ensure proper printing of the structure," he said.
Porfiri will develop a mathematical framework to allow the robots to autonomously coordinate their respective actions within the evolving physical environment, allowing multiple mobile printers to concurrently create a structure with higher efficiency. This ability would be especially important in places like Mars where there is no remote server close enough to control the coordinated efforts of the robots without a time lag.
"Different from drones flying in formation or autonomous cars keeping distance from each other, our mobile printers leave a unique footprint in the physical environment: the object being printed. My work will leverage this very footprint to establish effective algorithms for coordination and collective printing." Jin will help the team to develop new composite materials suitable for mobile 3D concrete printing. The team plans to demonstrate the effectiveness of the algorithms by real-world 3D printing of those new concretes using mobile printers that they will build at NYU Tandon.
"To unleash the full potential of collective additive manufacturing, several scientific boundaries must be pushed, ensuring optimal deployment of multiple mobile robots that print large structures according to an engineered, virtual design," said Feng.
Source and top image: NYU Tandon School of Engineering