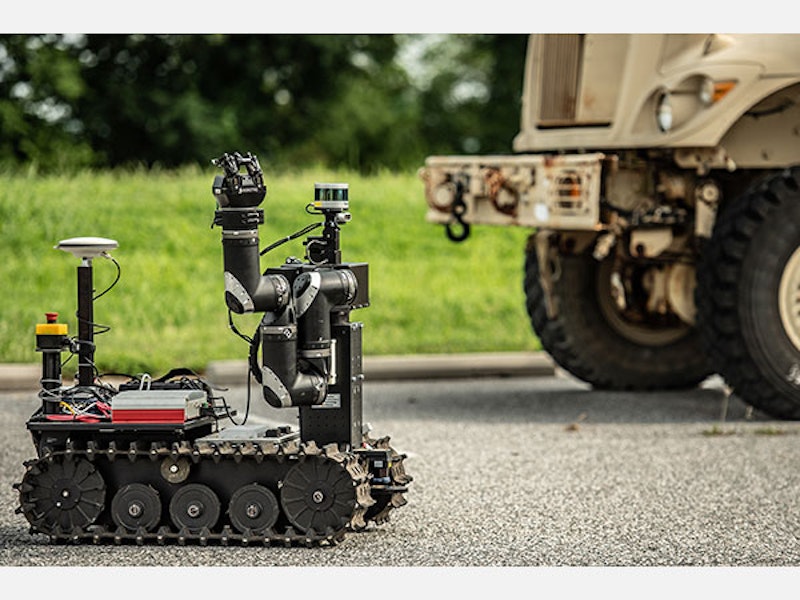 Army researchers tested ground robots performing military-style exercises, much like Soldier counterparts, at a robotics testing site in Pennsylvania recently as part of a 10-year research project designed to push the research boundaries in robotics and autonomy. For more information see the IDTechEx report on Mobile Robots and Drones in Material Handling and Logistics 2018-2038.
RoMan, short for Robotic Manipulator, is a tracked robot that is easily recognized by its robotic arms and hands - necessary appendages to remove heavy objects and other road debris from military vehicles' paths. What's harder to detect is the amount of effort that went into programming the robot to manipulate complex environments.
The exercise was one of several recent integration events involving a decade of research led by scientists and engineers at the U.S. Army Combat Capabilities Development Command's Army Research Laboratory who teamed with counterparts from the NASA/Jet Propulsion Laboratory, University of Washington, University of Pennsylvania, Carnegie Mellon University and General Dynamics Land Systems.
As part of ARL's Robotics Collaborative Technology Alliance, the work focused on state-of-the-art basic and applied research related to ground robotics technologies with an overarching goal of developing autonomy in support of manned-unmanned teaming. Research within the RCTA program serves as foundational research in support of future combat ground vehicles.
The recent robot exercise was the culmination of research to develop a robot that reasons about unknown objects and their physical properties, and decides how to best interact with different objects to achieve a specific task.
"Given a task like 'clear a path', the robot needs to identify potentially relevant objects, figure out how objects can be grasped by determing where and with what hand shape, and decide what type of interaction to use, whether that's lifting, moving, pushing or pulling to achieve its task," said CCDC ARL's Dr. Chad Kessens, Robotic Manipulation researcher.
During the recent exercise, RoMan successfully completed such as multi-object debris clearing, dragging a heavy object (e.g., tree limb), and opening a container to remove a bag.
Kessens said Soldier teammates are able to give verbal commands to the robot using natural human language in a scenario.
"Planning and learning and their integration cut across all these problems. The ability of the robot to improve its performance over time and to adapt to new scenarios by building models on-the-fly while incorporating the power of model-based reasoning will be important to achieving the kinds of unstructured tasks we want to be able to do without putting Soldiers in harm's way," Kessens said.
This work, and other research, will be showcased Oct. 17 at the RCTA's integration capstone event at Carnegie Mellon University's National Robotics Engineering Center in Pittsburgh.
Source: US Army Research Laboratory