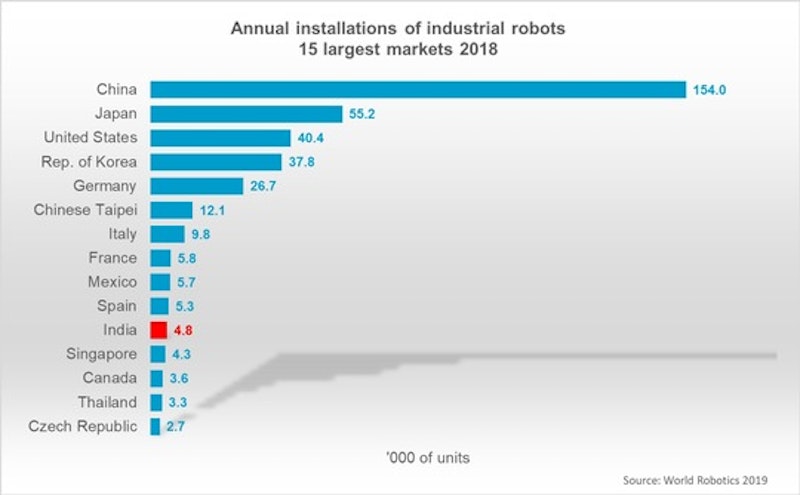 Sales of industrial robots in India reached a new record of 4,771 new units installed in 2018. That is an increase of 39 percent compared to the previous year (2017: 3,412 units). India now ranks eleventh worldwide in terms of annual installations. These are the findings of the report World Robotics 2019, presented by the International Federation of Robotics (IFR). For more information see the IDTechEx report on New Robotics and Drones 2018-2038: Technologies, Forecasts, Players.
"India is one of the strongest growing economies among the emerging markets in Asia," says Junji Tsuda, President of the International Federation of Robotics. "Whilst the recent global results were quite moderate, India saw an impressive growth rate of 39% in 2018. The number of robot installations has been growing rapidly for several years now. Between 2013 and 2018, India saw a compound annual growth rate of 20 percent."
Promising Outlook
Prospects for further increasing robot installations are promising. The Indian GDP is expected to grow by more than 7% in 2019 and companies across many industries intend to expand capacities. India has a young population, hence a strong workforce in need of jobs. The country needs to expand its manufacturing industry to create more job opportunities. Higher wages and the rising share of affluent citizens in India are the main drivers of a growing and promising consumer market.
Automotive industry
The automotive industry remains the largest customer industry by far, with a share of 44% of total installations. But the strongest growth driver in 2018 was the general industry, increasing by 28%, consisting of the rubber and plastics industry, the metal industry and the electrical/electronics industry. Robot use in non-automotive manufacturing is catching up with the automotive sector.
Robot stock and India´s potential
Regarding annual installations, India now ranks eleventh in the global annual supply - three places higher compared to the previous year and ahead of Singapore, Canada and Thailand. The operational stock of robots rose to about 23,000 units: +21% compared to 2017. The country's automation potential is illustrated by a low robot density figure in the automotive industry: 99 industrial robots per 10,000 employees is less than a fourth of Indonesia's density (440 units) and far away from China (732 units) and the frontrunner Korea (2,589). India's robot density in the manufacturing industry only reaches a value of 4 industrial robots per 10,000 employees.
About IFR
The International Federation of Robotics: www.ifr.org