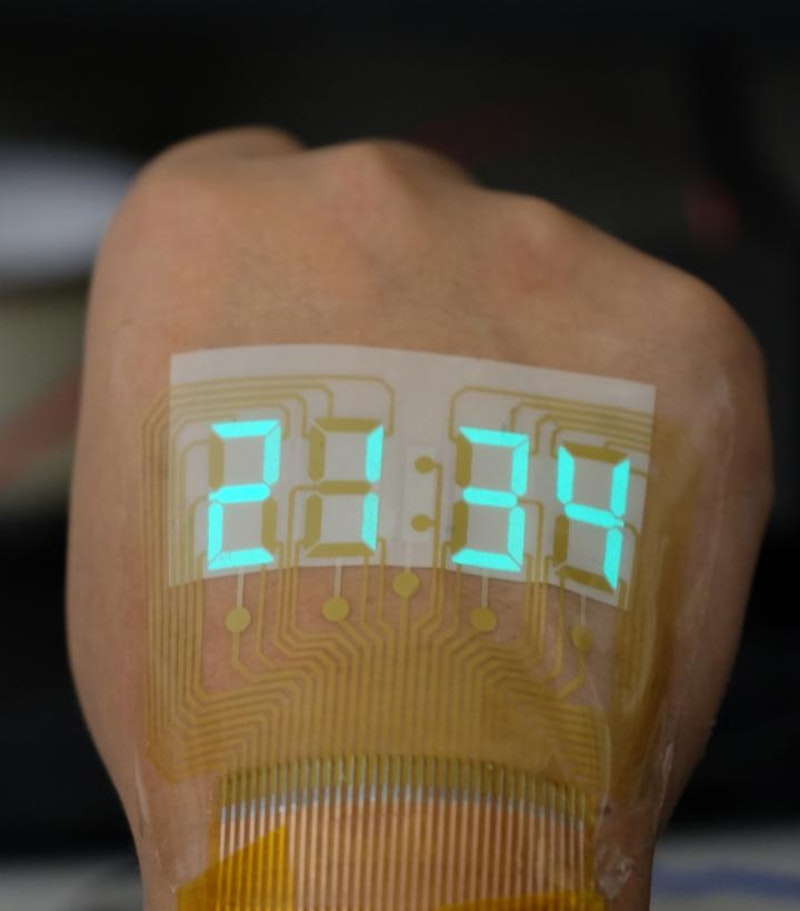 Imagine a runner who doesn't need to carry a stopwatch or cell phone to check her time: She could just gaze at the glowing stopwatch display on the back of her hand. Such human-machine interfaces are no longer science fiction, but they still have a way to go before becoming mainstream. Now, researchers reporting in ACS Materials Letters have developed a stretchable light-emitting device that operates at low voltages and is safe for human skin. For more information see the IDTechEx report on Stretchable and Conformal Electronics 2019-2029.
Recently, scientists have developed stretchable light-emitting devices called alternating-current electroluminescent (ACEL) displays that can be stuck on skin or other surfaces like a temporary tattoo. However, the displays require relatively high voltages to achieve sufficient brightness, which could create safety concerns. So, Desheng Kong and colleagues wanted to develop an ACEL that could operate at lower voltages and thus be safer for human skin.
To make their device, the researchers sandwiched an electroluminescent layer, made of light-emitting microparticles dispersed in a stretchable dielectric material, between two flexible silver nanowire electrodes. The device contained a new type of dielectric material, in the form of ceramic nanoparticles embedded in a rubbery polymer, that increased the brightness compared with existing ACEL displays. They used this material to make a four-digit stopwatch display, which they mounted onto a volunteer's hand. At low voltages, the stretchable display was sufficiently bright to be seen under indoor lighting. The bright stretchable display could find a broad range of applications in smart wearables, soft robotics and human-machine interfaces, the researchers say.
Source and top image: American Chemical Society
Learn more at the next leading event on the topic: Healthcare Sensor Innovations USA 2020

Webinar 7 May - Where Is the Future of COVID-19 Diagnostics?
Terahertz Technology comes Centre Stage
Training on Emerging Technologies at IDTechEx Masterclasses
Become the Next IDTechEx Launchpad Start-up Success Story!