Self-Transforming Robot Blocks Jump, Flip, Identify With Each Other 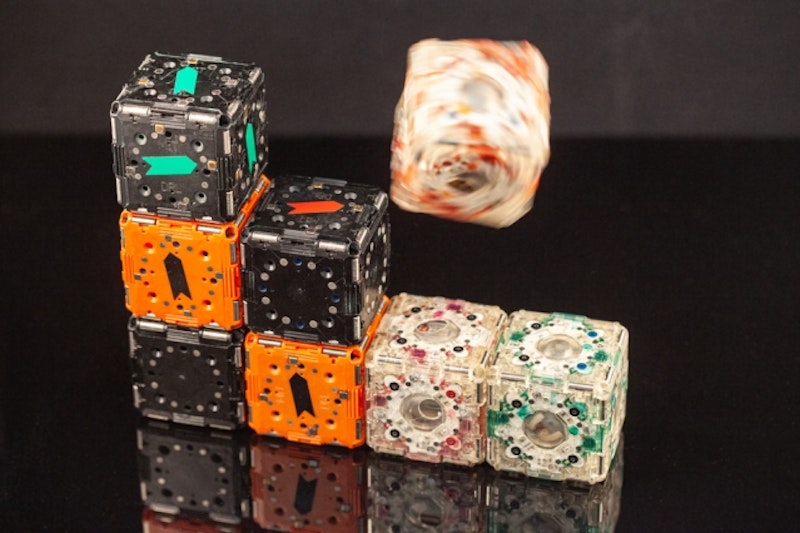 Swarms of simple, interacting robots have the potential to unlock stealthy abilities for accomplishing complex tasks. Getting these robots to achieve a true hive-like mind of coordination, though, has proved to be a hurdle. For more information see the IDTechEx report on Mobile Robots and Drones in Material Handling and Logistics 2018-2038.
In an effort to change this, a team from MIT's Computer Science and Artificial Intelligence Laboratory (CSAIL) came up with a surprisingly simple scheme: self-assembling robotic cubes that can climb over and around one another, leap through the air, and roll across the ground. Six years after the project's first iteration, the robots can now "communicate" with each other using a barcode-like system on each face of the block that allows the modules to identify each other. The autonomous fleet of 16 blocks can now accomplish simple tasks or behaviors, such as forming a line, following arrows, or tracking light. Inside each modular "M-Block" is a flywheel that moves at 20,000 revolutions per minute, using angular momentum when the flywheel is braked. On each edge and every face are permanent magnets that let any two cubes attach to each other.
While the cubes can't be manipulated quite as easily as, say, those from the video game "Minecraft," the team envisions strong applications in inspection, and eventually disaster response. Imagine a burning building where a staircase has disappeared. In the future, you can envision simply throwing M-Blocks on the ground, and watching them build out a temporary staircase for climbing up to the roof, or down to the basement to rescue victims.
"M stands for motion, magnet, and magic," says MIT Professor and CSAIL Director Daniela Rus. "'Motion,' because the cubes can move by jumping. 'Magnet,' because the cubes can connect to other cubes using magnets, and once connected they can move together and connect to assemble structures. 'Magic,' because we don't see any moving parts, and the cube appears to be driven by magic."
While the mechanism is quite intricate on the inside, the exterior is just the opposite, which enables more robust connections. Beyond inspection and rescue, the researchers also imagine using the blocks for things like gaming, manufacturing, and health care.
"The unique thing about our approach is that it's inexpensive, robust, and potentially easier to scale to a million modules,'' says CSAIL PhD student John Romanishin, lead author on a new paper about the system. "M-Blocks can move in a general way. Other robotic systems have much more complicated movement mechanisms that require many steps, but our system is more scalable."
Romanishin wrote the paper alongside Rus and undergraduate student John Mamish of the University of Michigan. They will present the paper on M-blocks at IEEE's International Conference on Intelligent Robots and Systems this month in Macau. Previous modular robot systems typically tackle movement using unit modules with small robotic arms known as external actuators. These systems require a lot of coordination for even the simplest movements, with multiple commands for one jump or hop.
On the communication side, other attempts have involved the use of infrared light or radio waves, which can quickly get clunky: If you have lots of robots in a small area and they're all trying to send each other signals, it opens up a messy channel of conflict and confusion. When a system uses radio signals to communicate, the signals can interfere with each other when there are many radios in a small volume.
Back in 2013, the team built out their mechanism for M-Blocks. They created six-faced cubes that move about using something called "inertial forces." This means that, instead of using moving arms that help connect the structures, the blocks have a mass inside of them which they "throw" against the side of the module, which causes the block to rotate and move. Each module can move in four cardinal directions when placed on any one of the six faces, which results in 24 different movement directions. Without little arms and appendages sticking out of the blocks, it's a lot easier for them to stay free of damage and avoid collisions.
Knowing that the team had tackled the physical hurdles, the critical challenge still persisted: How to make these cubes communicate and reliably identify the configuration of neighboring modules?
Romanishin came up with algorithms designed to help the robots accomplish simple tasks, or "behaviors," which led them to the idea of a barcode-like system where the robots can sense the identity and face of what other blocks they're connected to. In one experiment, the team had the modules turn into a line from a random structure, and they watched if the modules could determine the specific way that they were connected to each other. If they weren't, they'd have to pick a direction and roll that way until they ended up on the end of the line. Essentially, the blocks used the configuration of how they're connected to each other in order to guide the motion that they choose to move — and 90 percent of the M-Blocks succeeded in getting into a line.
The team notes that building out the electronics was very challenging, especially when trying to fit intricate hardware inside such a small package. To make the M-Block swarms a larger reality, the team wants just that — more and more robots to make bigger swarms with stronger capabilities for various structures.
The project was supported, in part, by the National Science Foundation and Amazon Robotics.
Source: MIT
Learn more at the next leading event on the topic: Sensors Europe 2020