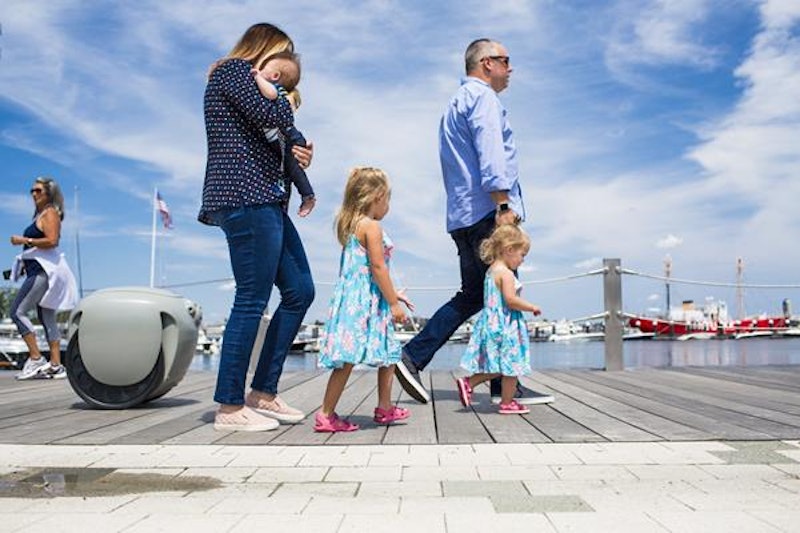 Piaggio Fast Forward (PFF) has unveiled gita, a robot that follows people on the go, carrying up to 40 pounds of belongings such as groceries, gym bag and backpacks. For more information see the IDTechEx report on Mobile Robots and Drones in Material Handling and Logistics 2018-2038.
"PFF was founded to create lifestyle-transforming mobility solutions, allowing people to move with greater freedom in their neighborhoods. With the gita robot, our first product, we're thrilled to see that vision come to life," said Greg Lynn, CEO and Co-founder at PFF. "From students to working professionals, new parents to grandparents, gita empowers people of all ages to more actively enjoy their surroundings, and to interact with their communities in a more meaningful way."
A simple push of a button allows gita to sense its environment and pair with its leader to instantly roll behind, in sync with their pace. gita was designed to move like humans move; with smooth, natural motion, it continuously follows without interruption, at up to six miles per hour.
Available in three colors—Signal Red, Thunder Gray or Twilight Blue—the gita robot stylishly complements daily life:
gita communicates seamlessly through sound, light and touch. In collaboration with the esteemed Berklee College of Music, a library of distinct sounds was composed to communicate gita's state, and in coordination with the robot's color-coded lighting system. The sounds and lights are used to indicate when gita is powered up, ready to pair or to inform about the battery level.
The gita app, mygita, is optional and not required for basic functionality of gita, but does provide a set of enhanced features. The app allows you to share gitas with your "crew," lock and unlock the cargo bin lid, receive notifications to your phone, check battery charge level, give other app users access to your gita, or even to stream and play audio through gita's speaker using Bluetooth® wireless technology. The app is available on iOS and Android devices.
gita is not autonomous; if in motion, it's always following a person. Amid popular discussion of self-driving vehicles and devices, gita is unique in its aim to provide humans, not machines, with greater autonomy. gita uses visual sensors to track and follow its leader, moving the way humans move. With privacy top of mind for many, PFF was adamant that gita uses this equipment exclusively to guide movement—the gita robot does not record pictures or videos and has no way to identify who it is following.
"PFF may be a robotics company, but we're focused on revitalizing everyday human movement and social interconnections," said Jeffrey Schnapp, Chief Visionary Officer and Co-founder at PFF. "By prioritizing healthy activity and social interaction, PFF is carving out a new category within the field of robotics: technology that moves the way people move and that augments human experiences rather than replacing or stifling them."
"The gita robot is a fundamental step toward the future of mobility for Piaggio Group. Our objective is to create an innovative consumer product that is efficient and easy to use while also enhancing daily life," said Michele Colaninno, PFF's Chairman.
Source and top image: Piaggio Fast Forward
Learn more at the next leading event on the topic: Sensors Europe 2020