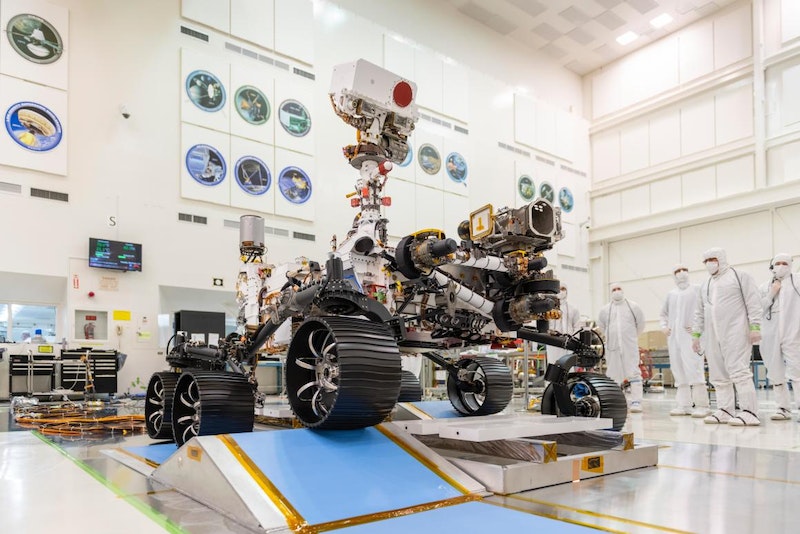 NASA's next Mars rover has passed its first driving test. A preliminary assessment of its activities on Dec. 17, 2019, found that the rover checked all the necessary boxes as it rolled forward and backward and pirouetted in a clean room at NASA's Jet Propulsion Laboratory in Pasadena, California. The next time the Mars 2020 rover drives, it will be rolling over Martian soil. For more information see the IDTechEx report on Mobile Robots and Drones in Material Handling and Logistics 2018-2038.
"Mars 2020 has earned its driver's license," said Rich Rieber, the lead mobility systems engineer for Mars 2020. "The test unambiguously proved that the rover can operate under its own weight and demonstrated many of the autonomous-navigation functions for the first time. This is a major milestone for Mars 2020."
Scheduled to launch in July or August 2020, the Mars 2020 mission will search for signs of past microbial life, characterize Mars' climate and geology, collect samples for future return to Earth, and pave the way for human exploration of the Red Planet. It is scheduled to land in an area of Mars known as Jezero Crater on Feb. 18, 2021.
"To fulfill the mission's ambitious science goals, we need the Mars 2020 rover to cover a lot of ground," said Katie Stack Morgan, Mars 2020 deputy project scientist. Mars 2020 is designed to make more driving decisions for itself than any previous rover. It is equipped with higher-resolution, wide-field-of-view color navigation cameras, an extra computer "brain" for processing images and making maps, and more sophisticated auto-navigation software. It also has wheels that have been redesigned for added durability.
All these upgrades allow the rover to average about 650 feet (200 meters) per Martian day. To put that into perspective, the longest drive in a single Martian day was 702 feet (214 meters), a record set by NASA's Opportunity rover. Mars 2020 is designed to average the current planetwide record drive distance.
In a 10-plus-hour marathon on Tuesday that demonstrated all the systems working in concert, the rover steered, turned and drove in 3-foot (1-meter) increments over small ramps covered with special static-control mats. Since these systems performed well under Earth's gravity, engineers expect them to perform well under Mars' gravity, which is only three-eighthsas strong. The rover was also able to gather data with the Radar Imager for Mars' Subsurface Experiment (RIMFAX).
"A rover needs to rove, and Mars 2020 did that yesterday," said John McNamee, Mars 2020 project manager. "We can't wait to put some red Martian dirt under its wheels."
JPL is building and will manage operations of the Mars 2020 rover for NASA. NASA's Launch Services Program, based at the agency's Kennedy Space Center in Florida, is responsible for launch management.
Mars 2020 is part of a larger program that includes missions to the Moon as a way to prepare for human exploration of the Red Planet. Charged with returning astronauts to the Moon by 2024, NASA will establish a sustained human presence on and around the Moon by 2028 through NASA's Artemis lunar exploration plans.
Source and top image: NASA