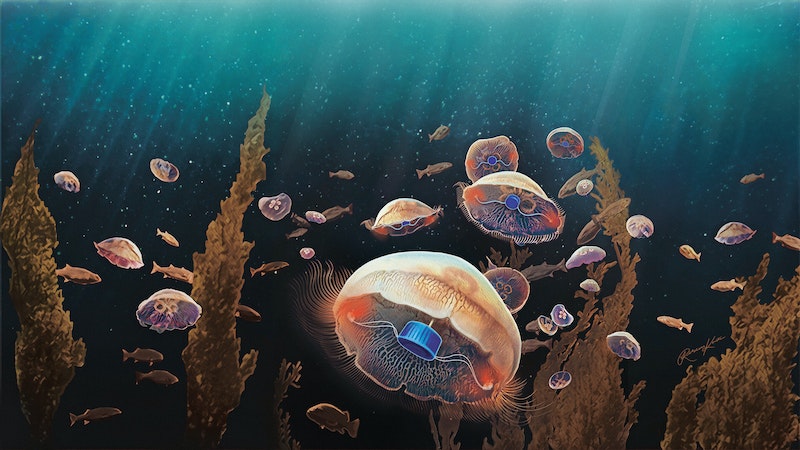 Engineers at Caltech and Stanford University have developed a tiny prosthetic that enables jellyfish to swim faster and more efficiently than they normally do, without stressing the animals. The researchers behind the project envision a future in which jellyfish equipped with sensors could be directed to explore and record information about the ocean.
Jellyfish use a pulsing motion to propel themselves forward, swishing their tentacles as they move to capture prey. The new prosthetic uses electrical impulses to regulate—and speed up—that pulsing, similar to the way a cardiac pacemaker regulates heart rate. The device, which is neutrally buoyant in water, is about two centimeters in diameter and is attached to the body of the jellyfish via a small wooden barb. The research—led by Caltech's John Dabiri, Centennial Professor of Aeronautics and Mechanical Engineering, and Stanford graduate student Nicole Xu —was published in the journal Science Advances on January 29. For further information see the IDTechEx report on Mobile Robots, Autonomous Vehicles, and Drones in Logistics, Warehousing, and Delivery 2020-2040.
Typically, jellyfish swim at a rate of about two centimeters per second. Although they are capable of moving more quickly, doing so does not aid them in ensnaring prey, their typical reason for using the tentacle-waving "swimming" motion.
In the research described in the paper, Dabiri, Xu, and colleagues equipped jellyfish with a microelectronic controller pulsing at a frequency three times faster than the animals' usual body pulses. The animals' pulsing sped up, producing a corresponding increase in their swimming speed to around 4-6 centimeters per second. In addition to making the jellyfish faster, the electrical jolts also made them swim more efficiently. Although the jellyfish swam three times faster than their usual pace, they used just twice as much energy to do so (as measured by the amount of oxygen consumed by the animals while swimming). In fact, the prosthetic-equipped jellyfish were over 1,000 times more efficient than swimming robots, Xu says.
"We've shown that they're capable of moving much faster than they normally do, without an undue cost on their metabolism," Xu says. "This reveals that jellyfish possess an untapped ability for faster, more efficient swimming. They just don't usually have a reason to do so."
It should be noted that the jellyfish were closely monitored to make sure that they were not harmed. Jellyfish do not have a brain or pain receptors, but they have been found to secrete mucus when stressed, and no such secretion was observed in this experiment. In addition, the jellyfish went back to swimming normally once the prosthetic was removed.
The research represents a "middle ground" between two veins of bioinspired robotics work that Dabiri has been involved in for the past decade, both at Caltech and Stanford. One involves the use of purely mechanical components and the other purely biological materials.
With purely mechanical systems, Dabiri has had success building robots that look like real animals but require much more energy to accomplish the same tasks. "We haven't captured the elegance of biological systems yet," he notes. However, although they are more elegant than robots, purely biological systems are a lot more fragile. Indeed, in collaboration with colleagues at Harvard University, Dabiri has shown that rat heart cells can respond to electric fields—which potentially makes them useful building blocks for biological devices—but the cells only survive under laboratory conditions.
The effort to add mechanical controls to jellyfish began in 2013 at Caltech when Xu was an undergraduate student doing a Summer Undergraduate Research Fellowship (SURF) in Dabiri's lab. Dabiri was interested in leveraging jellyfish for ocean exploration and sensing because of their abundance: the species used in the current experiments can be found throughout the earth's oceans, at depths ranging from the surface to the bottom of deep trenches.
"Only five to 10 percent of the volume of the ocean has been explored, so we want to take advantage of the fact that jellyfish are everywhere already to make a leap from ship-based measurements, which are limited in number due to their high cost," Dabiri says. "If we can find a way to direct these jellyfish and also equip them with sensors to track things like ocean temperature, salinity, oxygen levels, and so on, we could create a truly global ocean network where each of the jellyfish robots costs a few dollars to instrument and feeds themselves energy from prey already in the ocean."
Currently, the prosthetic can direct jellyfish to start swimming and control the pace. The next step will be to develop a system that guides the jellyfish in specific directions and that allows them to respond to signals from onboard sensors, says Dabiri, who hopes to develop even smaller electronic controls that could be completely embedded in the jellyfish's tissue, making them permanent but unnoticed prosthetics.
Source and top image: Caltech