Origami Inspired Robots That Could fit in a Cell? 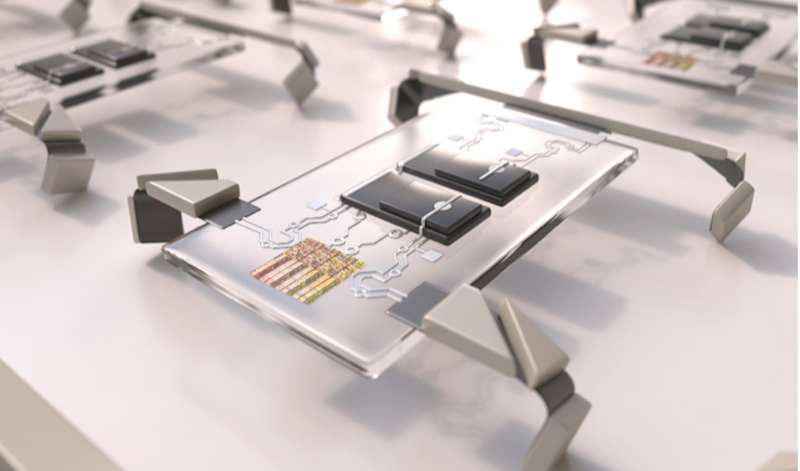 Imagine robots that can move, sense and respond to stimuli, but that are smaller than a hair's width. This is the project that Cornell professor and biophysicist Itai Cohen has been working on with his team. His project is inspired by the microscopic robots in Paul McEuen's book Spiral. Building robots at such a small scale involves a lot more innovation than simply shrinking all of the parts of a normal robot. At low Reynolds number, fluids are viscous instead of inertial, Van der Waals forces come into play, as well as other factors that affect how the robot can move and function.
To resolve this issue, Cohen and his team decided to build and pattern their micro robots in 2D. Then, inspired by origami, a computer would print the 2D pattern of a robot that can fold itself into a 3D structure. Because paper origami is scale invariant, mechanisms built at one scale will work at another, so the idea is to build robot patterns than can be printed and then walk off of the page or out of a petri dish. However, as Cohen said "an origami artist is only as good as their origami paper." And to build robots at a microscopic scale, one would need some pretty thin paper. Cohen's team uses graphene, a single sheet of which is only one atom thick. Atomic layer deposition films also behave very similarly to paper, and can be cut up, stretch locally and adopt a 3D shape. Some key steps to making sure the robot self-folds include making elements that bend, and putting additional stiff pads that localize bends in the pattern of the robot. This is what allows them to produce what they call "graphene bimorphs." For more information see the IDTechEx report on Graphene, 2D Materials and Carbon Nanotubes: Markets, Technologies and Opportunities 2019-2029.
Cohen and his team are looking to use microscopic robots in making artificial cilia, which are small leg-like protrusions in cells. Cilia can be sensory or used for locomotion. In the brain, there are cavities where neurotransmitters are redirected based on cilial beatings, so if one can control the individual beating of cilia, they can control where neurotransmitters are directed. This could potentially have biomedical implications for detecting and resolving neurological disorders.
Right now, Cohen and his lab have microscopic robots made of graphene, which have photovoltaics attached to their legs. When a light shines on the photovoltaic receptor, it activates the robot's arm movement, and it can wave hello. The advantage of using photovoltaics is that to control the robot, scientists can shine light instead of supplying voltage through a probe—the robot doesn't need any tethers. During a presentation, Cohen showed the audience a video of his "Brobot," a robot that flexes its arms when a light shines on it. His team has also successfully made microscopic robots with front and back legs that can walk off a petri dish. Their dimensions are 70 microns long, 40 microns wide and two microns thick.
Cohen wants to think critically about what problems are important to use technology to solve; he wants to make projects that can predict the behavior of people in crowds, predict the direction people will go in response to political issues, and help resolve water crises. Cohen's research has the potential to find solutions for a wide variety of current issues. Using science fiction and origami as the inspiration for his projects reminds us that the ideas we dream of can become tangible realities.
Source: Duke University
Top image: Yale University