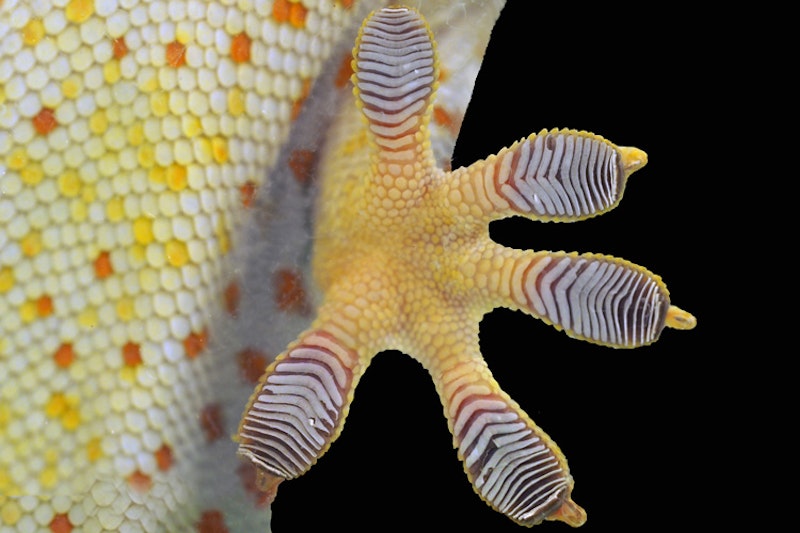 Robots with toes? Experiments suggest that climbing robots could benefit from having flexible, hairy toes, like those of geckos, that can adjust quickly to accommodate shifting weight and slippery surfaces. Biologists from the University of California, Berkeley, and Nanjing University of Aeronautics and Astronautics observed geckos running horizontally along walls to learn how they use their five toes to compensate for different types of surfaces without slowing down.
"The research helped answer a fundamental question: Why have many toes?" said Robert Full, UC Berkeley professor of integrative biology. As his previous research showed, geckos' toes can stick to the smoothest surfaces through the use of intermolecular forces, and uncurl and peel in milliseconds. Their toes have up to 15,000 hairs per foot, and each hair has "an awful case of split ends, with as many as a thousand nano-sized tips that allow close surface contact," he said. for further information see the IDTechEx report on Mobile Robots, Autonomous Vehicles, and Drones in Logistics, Warehousing, and Delivery 2020-2040.
High-speed cameras allowed the researchers to film the gecko from various angles as it ran along walls parallel to the floor, adjusting to rough surfaces and sticky patches that caused it to slip. The research can help engineers design robots that climb walls and skitter across ceilings like geckos.
These discoveries have spawned research on new types of adhesives that use intermolecular forces, or van der Waals forces, to stick almost anywhere, even underwater.
One puzzle, he said, is that gecko toes only stick in one direction. They grab when pulled in one direction, but release when peeled in the opposite direction. Yet, geckos move agilely in any orientation. To determine how geckos have learned to deal with shifting forces as they move on different surfaces, Yi Song, a UC Berkeley visiting student from Nanjing, China, ran geckos sideways along a vertical wall while making high-speed video recordings to show the orientation of their toes. The sideways movement allowed him to distinguish downward gravity from forward running forces to best test the idea of toe compensation.
Using a technique called frustrated total internal reflection, Song also measured the area of contact of each toe. The technique made the toes light up when they touched a surface.
To the researcher's surprise, geckos ran sideways just as fast as they climbed upward, easily and quickly realigning their toes against gravity. The toes of the front and hind top feet during sideways wall-running shifted upward and acted just like toes of the front feet during climbing. To further explore the value of adjustable toes, researchers added slippery patches and strips, as well as irregular surfaces. To deal with these hazards, geckos took advantage of having multiple, soft toes. The redundancy allowed toes that still had contact with the surface to reorient and distribute the load, while the softness let them conform to rough surfaces.
"Toes allowed agile locomotion by distributing control among multiple, compliant, redundant structures that mitigate the risks of moving on challenging terrain," Full said. "Distributed control shows how biological adhesion can be deployed more effectively and offers design ideas for new robot feet, novel grippers and unique manipulators."
Source and top image: UC Berkeley