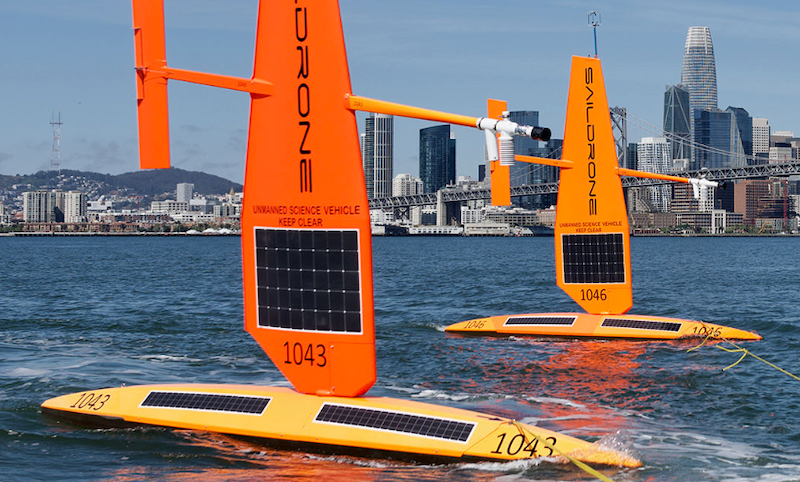 With upcoming ship-based surveys in Alaska canceled due to the global health crisis, NOAA Fisheries has turned to Saildrone to collect data to support the sustainable management of America's largest fishery.
The Alaska pollock fishery in the eastern Bering Sea is the largest commercial fishery in the US by volume. Landings in recent years have totalled some 1.2 billion kilograms (2.6 billion pounds)—a value of around $1.4 billion dollars. Sustainable management of the fishery requires scientific, fisheries-independent surveys to set appropriate fishing quotas. NOAA Fisheries traditionally uses research vessels and chartered fishing vessels to perform fisheries surveys, but due to the COVID-19 pandemic, this summer's ship-based surveys in the region have been canceled. Instead, three Saildrone unmanned surface vehicles (USVs) deployed from Alameda, CA, are sailing to the Bering Sea to perform this important task. For further information see the IDTechEx report on Agricultural Robots, Drones, and AI: 2020-2040: Technologies, Markets, and Players.
"Extraordinary times require extraordinary measures," said Alex De Robertis, a fisheries biologist at NOAA Fisheries and project lead for the Alaska Fisheries Science Center (AFSC). "We knew there was a possibility that surveys may be canceled this year, so we worked on a contingency plan to collect some data just in case. We were able to capitalize on our previous experience working closely with Saildrone and NOAA Research's Pacific Marine Environmental Laboratory (PMEL) to get things off the ground quickly."
Saildrone has collaborated with the AFSC and PMEL on several missions in the Arctic since 2015 to develop the vehicle's capabilities and refine the sensors. Missions include studying the impacts of climate variability and other environmental aspects on northern fur seals and other marine mammal populations, measuring carbon dioxide and the abundance of Arctic cod, collecting observations for sea ice prediction and satellite algorithm development, and tracking Alaska red king crab. The 2020 AFSC Alaska Pollock Survey will be Saildrone's seventh mission to the Arctic and the company's first operational mission.
Saildrone USVs operating in the Arctic are typically launched out of Dutch Harbor, AK. Due to current travel restrictions, the AFSC saildrones were launched from Saildrone HQ in mid-May for the six-week transit to the Bering Sea.
"Saildrones are designed to be deployed from any dock, sail to any location in the ocean, and complete their data-gathering missions without putting humans at risk. This makes Saildrone technology ideally suited to these tough times," said Saildrone CEO Richard Jenkins. "We're proud to be able to contribute to this important mission."
The three saildrones were deployed just nine days after the last-minute contract was signed. "Saildrone was amazingly responsive and got this off the ground very quickly, for which we are grateful," said De Robertis.
The saildrones are expected to reach the Bering Sea in early July to begin the 60-day acoustic survey. Each vehicle will cover a third of the total survey area normally covered by research vessels. They are equipped with Simrad EK80 high-precision split-beam echo sounders, known colloquially as fish-finders, which send pulses of sound through the water and measure the acoustic backscatter (sound waves reflected from fish in the water). The saildrones will make repeated measurements while moving through the water; the data will be used to map fish abundance and estimate overall fish populations.
A research vessel would also normally use trawls to catch a sample of fish to confirm species as well as the weight, length, and sex of individuals. While this is not possible to do with a saildrone, De Robertis explained that in the survey area in the Bering Sea, pollock are by far the dominant midwater fish: "We are confident of getting a useful measure of pollock abundance from the echo sounder, even if we can't directly sample fish. Acoustic-only measurements from ships are already used to inform fisheries management, and we plan to do the same thing with the saildrones."
‍Saildrone USVs also carry a standard suite of science-grade instruments to collect oceanographic and meteorological data above and below the sea surface including air, sea, and skin temperature, wind speed and direction, relative humidity, barometric pressure, photosynthetically active radiation, salinity, dissolved oxygen, chlorophyll, and wave height and period. While the Alaska pollock survey helps to sustainably manage resources, information about the ocean ecosystem in this productive region can help to improve climate and weather models.
"We will make data available to weather forecast centers worldwide via the World Meteorological Organization's Global Telecommunication System (GTS) so that the observations can be incorporated into weather predictions," said Eugene Burger, associate director for information and technology at NOAA's Pacific Marine Environmental Laboratory.
Saildrone is operating several other ongoing and soon-to-launch missions, including the 2019-2020 Atlantic to Mediterranean mission, during which two vehicles are measuring CO2 and collecting observations for cross-calibrations of European Research Infrastructure (RI), and the 2020 ATOMIC/EUREC4A campaign—five saildrones studied air-sea interaction in the North Brazil Current off Barbados for 40 days over the winter with two of the vehicles continuing observation until July.
Source and top image: Saildrone