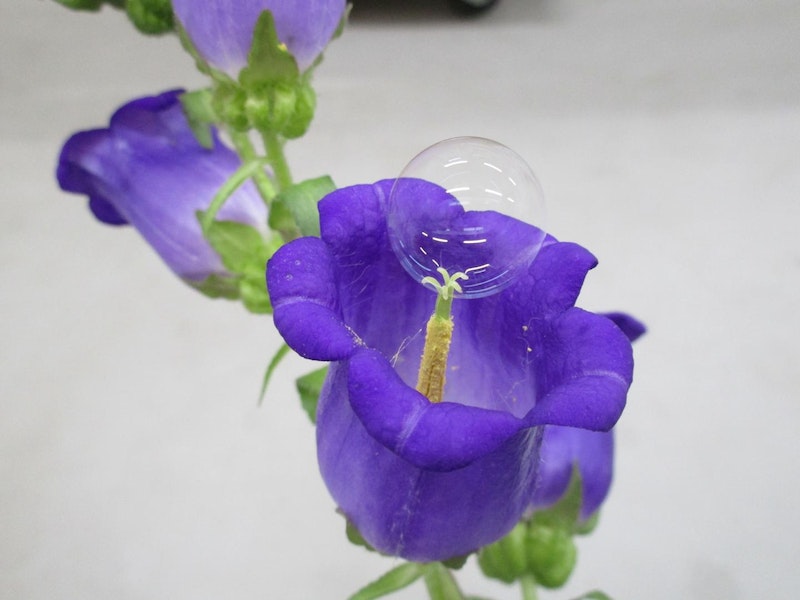 Soap bubbles facilitated the pollination of a pear orchard by delivering pollen grains to targeted flowers, demonstrating that this whimsical technique can successfully pollinate fruit-bearing plants. The study, from the Japan Advanced Institute of Science and Technology in Nomi, Japan, and published in the journal iScience, suggests that soap bubbles may present a low-tech complement to robotic pollination technology designed to supplement the work of vanishing bees. For further information see the IDTechEx report on Agricultural Robots, Drones, and AI: 2020-2040: Technologies, Markets, and Players.
"It sounds somewhat like fantasy, but the functional soap bubble allows effective pollination and assures that the quality of fruits is the same as with conventional hand pollination," says senior author Eijiro Miyako, an associate professor in the School of Materials Science at the Japan Advanced Institute of Science and Technology. "In comparison with other types of remote pollination, functional soap bubbles have innovative potentiality and unique properties, such as effective and convenient delivery of pollen grains to targeted flowers and high flexibility to avoid damaging them."
Miyako and colleagues previously published a study in the journal Chem, in which they used a tiny toy drone to pollinate blossoming flowers. But although the drone was only two centimeters long, the researchers struggled to prevent it from destroying the flowers as it bumped into them. While searching for a more flower-friendly artificial pollination technique, Miyako spent a day at the park blowing bubbles with his son. When one of the bubbles collided against his son's face--a predictably injury-free accident--Miyako found his inspiration.
After confirming through optical microscopy that soap bubbles could, in fact, carry pollen grains, Miyako and Xi Yang, his coauthor on the study, tested the effects of five commercially available surfactants on pollen activity and bubble formation. The neutralized surfactant lauramidopropyl betain (A-20AB) won out over its competitors, facilitating better pollen germination and growth of the tube that develops from each pollen grain after it is deposited on a flower. Based on a laboratory analysis of the most effective soap concentrations, the researchers tested the performance of pear pollen grains in a 0.4% A-20AB soap bubble solution with an optimized pH and added calcium and other ions to support germination. After three hours of pollination, the pollen activity mediated through the soap bubbles remained steady, while other methods such as pollination through powder or solution became less effective.
Miyako and Yang then loaded the solution into a bubble gun and released pollen-loaded bubbles into a pear orchard, finding that the technique distributed pollen grains (about 2,000 per bubble) to the flowers they targeted, producing fruit that demonstrated the pollination's success. Finally, the researchers loaded an autonomous, GPS-controlled drone with functionalized soap bubbles, which they used to direct soap bubbles at fake lilies (since flowers were no longer in bloom) from a height of two meters, hitting their targets at a 90% success rate when the machine moved at a velocity of two meters per second.
Although this approach to pollination appears promising, more techniques are still needed to improve its precision. Plus, with soap bubbles, weather is key - raindrops can wash away pollen-bearing bubbles from flowers, while strong winds might blow them astray.
Next, Miyako and colleagues plan to tackle the issue of waste generated by the artificial pollinator prototype, since most bubbles still fail to land on their target flowers. "I believe that further innovative technologies, such as state-of-the-art localization and mapping, visual perception, path planning, motion control, and manipulation techniques would be essential for developing autonomous precision robotic pollination on a large scale," says Miyako.
Source and top image: Cell Press