Versius at Frimley Health to Give More Patients Keyhole Surgery 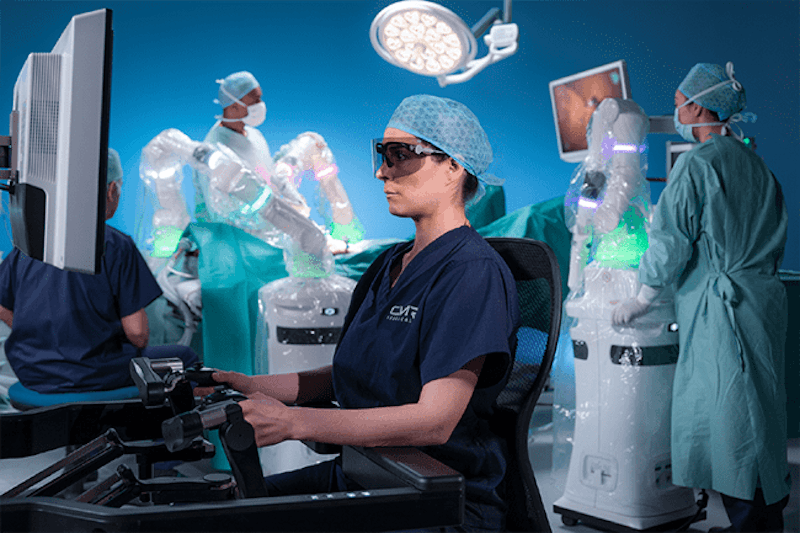 CMR Surgical Ltd announced the introduction of Versius, a next-generation surgical robot at Frimley Health. Frimley Health is a well-established surgical robotics centre and has become the first hospital in the UK to use Versius in Urology, as well as in Colorectal surgery, expanding the number of patients receiving the benefits of robotic assisted minimal access surgery (MAS), otherwise known as keyhole surgery. Frimley Health has used Versius to perform a range of procedures including radical nephrectomy to treat kidney cancer, and high anterior resections and sigmoidectomy to treat bowel cancer and inflammatory bowel disease. The portable and versatile design of Versius has supported Frimley Health to significantly expand its capacity to perform much-needed MAS. For further information see the IDTechEx report on Innovations in Robotic Surgery 2020-2030: Technologies, Players & Markets.
Henry Tilney, Consultant Colorectal Surgeon at Frimley Health, said: "The introduction of Versius at Frimley Health is a major step forward as we seek to maintain our centre as a leader in surgical robotics and make this technology a routine part of clinical practice. Our intention is that it will be used to help perform a range of surgical procedures including complex cancer cases - allowing us to offer the benefits of minimal access surgery to our patients, which include faster recovery times and reduced risk of infection. Versius now gives us the ability to use this technique for hundreds more patients than has been previously possible and is marking the start of a new, important era in this field."
Versius is now established as an important surgical tool in a number of leading hospitals across the world, where it is helping surgeons perform a wide range of MAS procedures, which are often complex and may last for many hours. Using robotic MAS in these cases may reduce recovery time for a patient from weeks to days, and can significantly lower physical strain for the surgeon.
Mark Slack, Chief Medical Officer at CMR Surgical, said: "We are delighted that a well-established surgical robotics centre, such as Frimley Health has chosen to expand its surgical robotics programme with Versius. In designing Versius our goal was to provide a versatile, portable, and cost-effective surgical robotic system that could transform the field of minimal access surgery - allowing more patients to benefit than currently do. The introduction of Versius at Frimley Health does just that, and crucially at a time when patients, surgeons and hospitals are facing unexpected health and economic challenges."
Versius is portable, modular, and designed to be easily moved between operating theatres. Once in an operating theatre, it takes an average of 15 minutes to set up the system. This allows it to be used frequently, with one Versius robot capable of performing hundreds of operations each year. Frimley Health joins a number of early adopters of Versius in the UK including NHS Lothian's Western General Hospital in Edinburgh, Milton Keynes University Hospital NHS Trust and Manchester University NHS Foundation Trust's Manchester Royal Infirmary. Further global launches are expected to be announced in the coming months.
Versius resets expectations of robotic surgery. Versius fits into virtually any operating room set-up and integrates seamlessly into existing workflows, increasing the likelihood of robotic MAS. The portable and modular design of Versius allows the surgeon to only use the number of arms needed for a given procedure. Biomimicking the human arm, Versius gives surgeons the choice of optimised port placement alongside the dexterity and accuracy of small fully-wristed instruments. With 3D HD vision, easy-to-adopt instrument control and a choice of ergonomic working positions, the open surgeon console has the potential to reduce stress and fatigue and allows for clear communication with the surgical team. By thinking laparoscopically and operating robotically with Versius, patients, surgeons and healthcare professionals can all benefit from the value that robotic MAS brings.
Source: AKT Health Comms
Top image: CMR Surgical Ltd