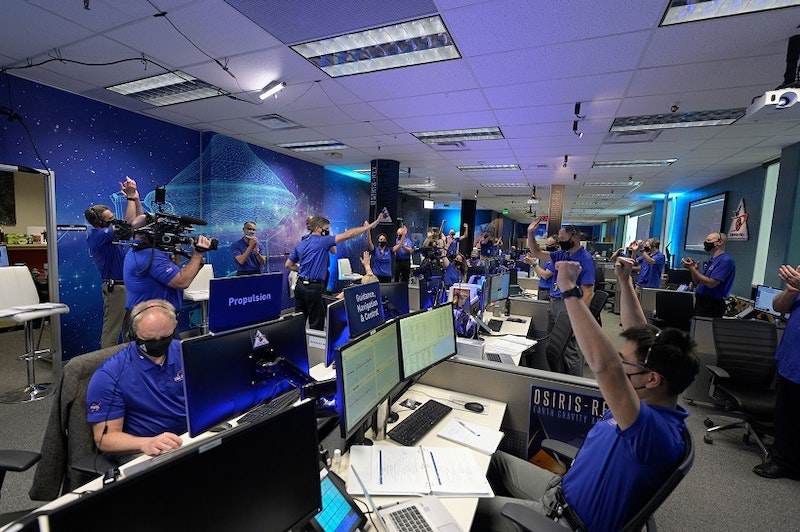 In the dark and cold of deep space on 20th October, the Lockheed Martin-built OSIRIS-REx spacecraft descended to the surface of an asteroid and touched it with its robotic arm to collect a sample of its rocky material. Although brief, the Touch-And-Go, or TAG, event was years in the making.
A planetary remnant, asteroid Bennu, is about as tall as the Empire State Building and contains pristine material from the formation of the solar system about 4.5 billion years ago potentially including the organic molecular precursors to life on Earth.
The Touch-And-Go Sample Acquisition Mechanism (TAGSAM) on NASA's OSIRIS-REx spacecraft successfully touched the asteroid surface and fired one of its nitrogen gas canisters to agitate and collect the surface material through a filter in the round sampler head. Then seconds later, the spacecraft slowly backed away from the asteroid and is continuing to drift away until the sample is assessed.
"Our nation has explored the solar system and landed on multiple bodies, but this is the first time we have attempted to collect a sample of an asteroid. Even though Bennu has posed many challenges, the team made it look easy today," said Lisa Callahan, vice president and general manager of Commercial Civil Space at Lockheed Martin. "Although there's more to do before we are fully successful, the TAG event went just as planned and I couldn't be prouder of the team."
Using multiple techniques, the team will now take a few days to determine how much material, if any at all, was collected. The mission's goal is to harvest at least 60 grams—about the size of a candy bar—of regolith and potentially collect up to 2 kilograms.
Mission operations of the spacecraft, including the 20th October TAG collection event, were performed at Lockheed Martin Space's facility near Denver. The flight team has been operating the spacecraft since launch in September 2016 and operation around Bennu in December 2018.
Today's TAG maneuver is the first time NASA has attempted to collect material from an asteroid. OSIRIS-REx is NASA's third robotic sample return mission and Lockheed Martin has built and operated all three of those spacecraft.
If the proper amount of material was collected, the team will stow the TAGSAM head, with material inside, into a sample return capsule. The spacecraft will then depart Bennu in March 2021 and return the capsule and sample to Earth on Sept.24, 2023.
NASA Goddard Space Flight Center in Greenbelt provides overall mission management, systems engineering and safety and mission assurance for OSIRIS-REx. Dante Lauretta of the University of Arizona, Tucson, is the principal investigator, and the University of Arizona also leads the science team and the mission's science observation planning and data processing. Lockheed Martin Space in Denver built the spacecraft and is currently providing spacecraft operations. OSIRIS-REx is the third mission in NASA's New Frontiers Program. NASA's Marshall Space Flight Center in Huntsville, Alabama, manages New Frontiers for the agency's Science Mission Directorate in Washington.
About Lockheed Martin
www.lockheedmartin.com

To find out about robotics market research from IDTechEx, please visit www.IDTechEx.com/research/ro or contact us at research@IDTechEx.com.