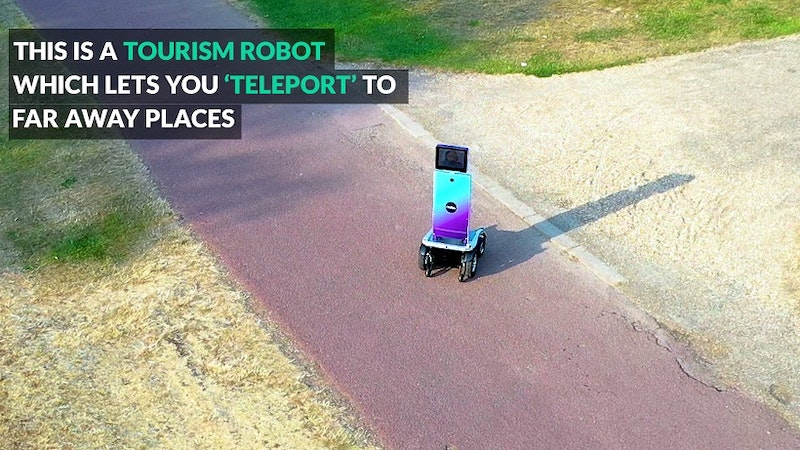 People who have been unable to travel can now, for the first time, visit and explore a variety of destinations with a new platform by Propelmee that lets users 'teleport' to places thousands of miles away.
UK technology start-up Propelmee today announces the public beta-release of Challau, a first-of-its-kind robot-powered virtual travel platform. Using Challau, travellers can choose from a range of destinations called 'Portals' to decide where they want to 'teleport' to. Each Portal has a live countdown until it becomes Active, at which point anyone can enter the Portal and virtually arrive at that location. Travellers can then experience the live sights and sounds that a Challau Robot is seeing and hearing at the Portal's physical location, and then choose to 'beam into' a robot.
A digital on-screen joystick lets travellers guide the robot's movements through their smartphone or computer with a full-screen view from the robot's main and secondary cameras. People around the robot can also see and hear the beamed in remote travellers, and using the robot's microphone and speakers, remote travellers can speak to locals should they wish.
Challau also supports physical joysticks and other game controllers that are paired with a browser (e.g. Playstation or Xbox controllers) making the experience like a real-life first-person video game. Challau robots are equipped with built-in safety technology and artificial intelligence to support the virtual travel experience.
"Countries around the world have imposed many travel restrictions and introduced strict quarantining rules. This makes it very difficult for people to travel for leisure or recreation. Tourism is one of the last remaining sectors to go fully digital - there aren't any good online alternatives for visiting places and that's what we wanted to solve with Challau", says Zain Khawaja, Founder & CEO of Propelmee.
Challau currently offers virtual travel to 7 destinations in the UK, including iconic tourist attractions such as Trafalgar Square London and historic locations in the city of Oxford. Challau aims to scale up to 21 Portal destinations in the UK and internationally at the start of the New Year.
"Compared to existing online travel options, Challau gives users complete agency to explore as they wish, in real-time. We think that it's really exciting for people to drive a robot on the other side of the world. It's the closest thing to actually being there in person", says Khawaja.
The company is extending its technology to support other types of edge devices for unique remote travel experiences in crowded bazaars or busy city centers and is also integrating augmented reality to enrich user experiences.
About Propelmee and Challau
www.propelmee.com

Teleport yourself to real places around the world by beaming into robot avatars
Propelmee owns and operates Challau. Challau is the world's first teleportation service - that's right! Teleportation has long been a purely sci-fi concept where you can instantly transport yourself thousands of miles away at the click of button. We're making this a reality. Through Challau, you can now 'teleport' from anywhere around the world into a real-life robot avatar which lets you see, hear, interact, and move around, in remote places in real-time. Simply 'teleport' into a robot using your computer or smartphone to instantly explore the world like never before.
The Challau platform is made up of a shared fleet of robots that anyone, anywhere, can discover, access and interact through. Our robots are fitted with an array of sensors, and powered by our advanced Telepresence technology with ultra-fast communication systems, making it possible to beam yourself to places around the world in an instant.
Contact
Moeen Ashfaq - moeen@propelmee.com
IDTechEx Research
www.IDTechEx.com

To find out about robotics market research from IDTechEx, please visit www.IDTechEx.com/research/ro or contact us at research@IDTechEx.com.
Robotics Research
www.roboticsresear.ch