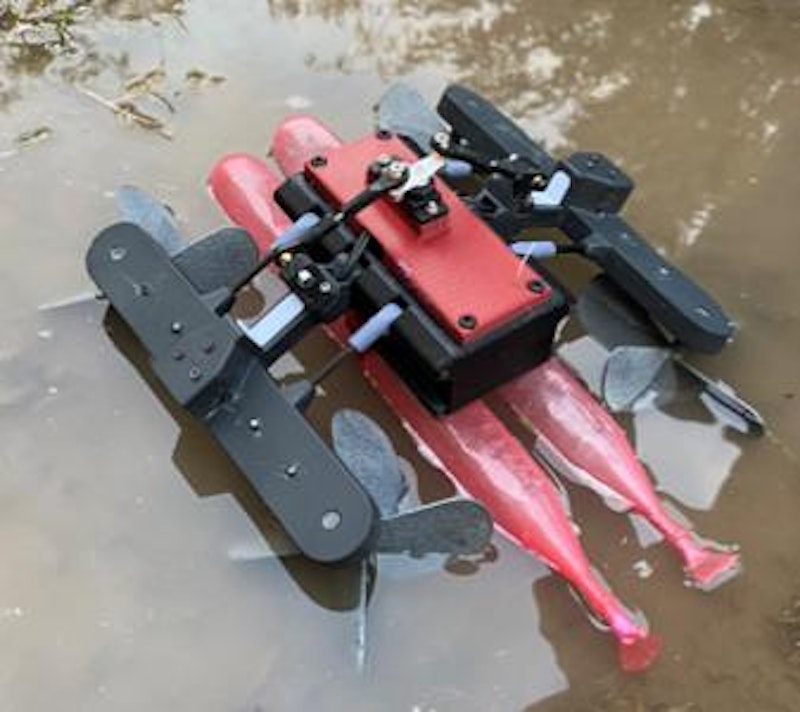 A new high-speed amphibious robot inspired by the movements of cockroaches and lizards, developed by Ben-Gurion University of the Negev (BGU) researchers, swims and runs on top of water at high speeds and crawls on difficult terrain.
The mechanical design of the AmphiSTAR robot and its control system were presented virtually last week at the IROS (International Conference on Intelligent Robots and Systems) by Dr. David Zarrouk, director, Bioinspired and Medical Robotics Laboratory in BGU's Department of Mechanical Engineering, and graduate student Avi Cohen. for further information see the IDTechEx report on Mobile Robots, Autonomous Vehicles, and Drones in Logistics, Warehousing, and Delivery 2020-2040.
"The AmphiSTAR uses a sprawling mechanism inspired by cockroaches, and it is designed to run on water at high speeds like the basilisk lizard," says Zarrouk. "We envision that AmphiSTAR can be used for agricultural, search and rescue and excavation applications, where both crawling and swimming are required."
The palm-size AmphiSTAR, part of the family of STAR robots developed at the lab, is a wheeled robot fitted with four propellers underneath whose axes can be tilted using the sprawl mechanism. The propellers act as wheels over ground and as fins to propel the robot over water while swimming and running on water at high speeds of 1.5 m/s. Two air tanks enable it to float and transition smoothly between high speeds when hovering on water to lower speeds swimming, and from crawling to swimming and vice versa.
The experimental robot can crawl over gravel, grass and concrete as fast as the original STAR robot and can attain speeds of 3.6 m/s (3.3 mph).
"Our future research will focus on the scalability of the robot and on underwater swimming," Zarrouk says.
Source and top image: Ben-Gurion University of the Negev