UVD Robots are Helping Trains get Back on Track 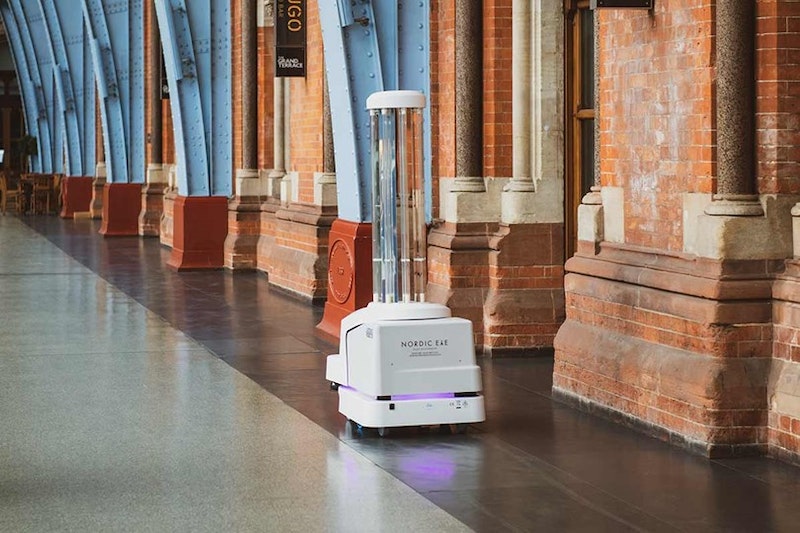 Train stations, hubs, and airports are some of the world's busiest and most populated places. With over 3 million people using public transport daily in London alone, the rate of human interaction increases significantly in these areas and the ability for social distancing decreases, leaving many vulnerable diseases and infections.
The Coronavirus pandemic saw a world-wide shutdown of public transport due to the high rates of infection reported on tubes, trains, buses and in stations and surrounding shops. Posting record losses, the transport sector suffered throughout lockdown as many transport systems were forced to reduce services by up to 90%. With so many critical touch points such as handrails, grab handles, stanchions, door buttons, toilet doors and ticket machines, public transport remains a key transmission area.
Jay Khan, Head of Stations Strategy and Delivery for Network Rail High Speed, explained the difficulties facing public transport during the pandemic and shared that "what's been very challenging from our perspective is giving confidence to our travelling public." This lack of public confidence continues to affect passenger numbers, leaving train stations looking for ways to convince the public to start using trains and buses again. For further information see the IDTechEx report on Mobile Robots, Autonomous Vehicles, and Drones in Logistics, Warehousing, and Delivery 2020-2040.
Hoping to persuade the public to visit the historical landmark's concourse and facilities is St Pancras International, who now trust the UVD Robot to keep their station clean and sanitised. The UVD Robot, supplied by Nordic Eye Sales Accelerator, is being used by St Pancras as part of its thorough cleaning schedule to keep passengers safe.
St Pancras International proudly unveiled its use of two virus killing robots, one UVD Robot and one Eco Bot 50, on its website, explaining that the station has gone "a step further to provide an even safer environment for Londoners and commuters to travel and shop."
Jay Newton, Head of Stations Engineering and Operations for High Speed One at St Pancras, explained that "in the present climate, it's quite difficult to keep this station clean at high touch point areas. So what the new technology will allow us to do is have our staff focusing on the higher touch points so that the automatic machines can then go and clean the mundane areas, and that allows us to ensure that we're doing exactly what we need to in the current climate." Freeing up time for cleaning staff to focus on high-risk areas, the UVD Robot is both time and cost-effective and provides important protection to staff at risk in the workplace.
Another important source of income for large stations is provided by the retail stores that line the upper and lower concourses. The UVD Robot also plays a huge role in ensuring the safety of customers in these retail areas. Jay Newton explained that "the main thing for us is to get the confidence of customers. We are the first train station to bring this type of technology in because we want to allow people to use our train station with confidence, use our retail units with confidence and slowly get back to a normal way."
CEO of Nordic Eye Sales Accelerator, Heath Williams, helps us to understand the science behind the UVD Robot explaining that "it uses UVC light, and viruses don't have an immune system to UVC light, and that in effect, stops it from replicating and kills the virus." Developed to disinfect to healthcare standards, the UVD Robot kills 99.9999% of bacteria, viruses, and harmful microorganisms in a matter of minutes, sanitising an average-sized room in around 10 minutes. Dubbed the Covid-19 killing robot, the fully autonomous base performs independently, sanitising 18,000 square meters in 2.5 hours.
Also housing the Eurostar terminus links to Paris, Brussels, and Amsterdam, St Pancras International's technologically advanced cleaning routine will help stop the spread of the virus to other countries and further.
Already returning customer confidence in Heathrow and Hamad International Airport, St Pancras International is also trusting the UVD Robot to help them keep customers and staff safe and get the transport sector back up and running.
Source: NESA Robotics, Nordic Eye Sales
Top image: St Pancras International