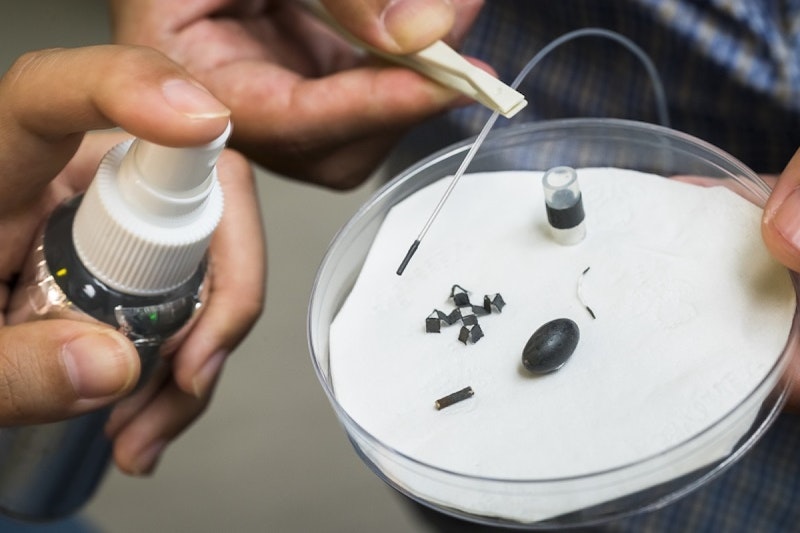 An easy way to make millirobots by coating objects with a glue-like magnetic spray was developed in a joint research led by a scientist from City University of Hong Kong (CityU). Driven by the magnetic field, the coated objects can crawl, walk, or roll on different surfaces. As the magnetic coating is biocompatible and can be disintegrated into powders when needed, this technology demonstrates the potential for biomedical applications, including catheter navigation and drug delivery.
The research team is led by Dr Shen Yajing, Associate Professor of the Department of Biomedical Engineering at CityU in collaboration with the Shenzhen Institutes of Advanced Technology, Chinese Academy of Sciences. The research findings have been published in the scientific journal Science Robotics, titled "An agglutinate magnetic spray transforms inanimate objects into millirobots for biomedical applications".
Transforming objects into millirobots with a "magnetic coat"
Scientists have been developing millirobots or insect-scale robots that can adapt to different environments for exploration and biomedical applications. Dr Shen's research team came up with a simple approach to construct millirobots by coating objects with a composited glue-like magnetic spray, called M-spray. "Our idea is that by putting on this 'magnetic coat', we can turn any objects into a robot and control their locomotion. The M-spray we developed can stick on the targeted object and 'activate' the object when driven by a magnetic field," explained Dr Shen.
Composed of polyvinyl alcohol (PVA), gluten and iron particles, M-spray can adhere to the rough and smooth surfaces of one (1D), two (2D) or three-dimensional (3D) objects instantly, stably and firmly. The film it formed on the surface is just about 0.1 - 0.25mm thick, which is thin enough to preserve the original size, form and structure of the objects. For further information see the IDTechEx report on Innovations in Robotic Surgery 2020-2030: Technologies, Players & Markets.
After coating the object with M-spray, the researchers magnetised it with single or multiple magnetisation directions, which could control how the object moved by a magnetic field. Then they applied heat on the object until the coating was solidified.
In this way, when driven by a magnetic field, the objects can be transformed into millirobots with different locomotion modes, such as crawling, flipping, walking, and rolling, on various surfaces from glass, skin, wood to sand. The team demonstrated this feature by converting cotton thread (1D), origami (2D flat plane), polydimethylsiloxane (PDMS) film (2D curved/soft surface) and plastic pipe (3D round object) into soft reptile robot, multi-foot robot, walking robot and rolling robot respectively.
On-demand reprogramming to change locomotion mode
What makes this approach special is that the team can reprogramme the millirobot's locomotion mode on demand.
Mr Yang Xiong, the co-first author of this paper, explained that conventionally, the robot's initial structure is usually fixed once it is constructed, hence constraining its versatility in motion. However, by wetting the solidified M-spray coating fully to make it adhesive like glue and then by applying a strong magnetic field, the distribution and alignment direction of the magnetic particles (easy magnetisation axis) of the M-spray coating can be changed.
Their experiments showed that the same millirobot could switch between different locomotion modes, such as from a faster 3D caterpillar movement in a spacious environment to a slower 2D concertina movement for passing through a narrow gap.
Navigating ability and disintegrable property
This reprogrammable actuation feature is also helpful for navigation towards targets. To explore the potential in biomedical applications, the team carried out experiments with a catheter, which is widely used for inserting into the body to treat disease or perform surgical procedures. They demonstrated that the M-spray coated catheter could perform sharp or smooth turns. And the impact of blood/liquid flow on the motion ability and stability on the M-spray coated catheter was limited.
By reprograming the M-spray coating of different sections of a cotton thread based on the delivery task and environment, they further showed that it could achieve a fast-steering and smoothly pass through an irregular, narrow structure. Dr Shen pointed out that from the view of clinical application, this can prevent the unexpected plunging in the throat wall during insertion. "Task-based reprogramming offers promising potential for catheter manipulation in the complex oesophagus, vessel and urethra where navigation is always required," he said.
Another important feature of this technology is that the M-spray coating can be disintegrated into powders on demand with the manipulation of a magnetic field. "All the raw materials of M-spray, namely PVA, gluten and iron particles, are biocompatible. The disintegrated coating could be absorbed or excreted by the human body," said Dr Shen, stressing the side effect of the disintegration of M-spray is negligible.
Successful drug delivery in rabbit stomach
To further verify the feasibility and effectiveness of the M-spray enabled millirobot for drug delivery, the team conducted in vivo test with rabbits and capsule coated with M-spray. During the delivery process, the rabbits were anaesthetised, and the position of the capsule in the stomach was tracked by radiology imaging. When the capsule reached the targeted region, the researchers disintegrated the coating by applying an oscillating magnetic field. "The controllable disintegration property of M-spray enables the drug to be released in a targeted location rather than scattering in the organ," Dr Shen added.
Though the M-spray coating will start to disintegrate in about eight minutes under strongly acidic environment (pH level 1), the team showed that an additional PVA layer on the surface of the M-spray coating could prolong it to about 15 minutes. And if replacing the iron particles with nickel particles, the coating could keep stable in a strongly acidic environment even after 30 minutes.
"Our experiment results indicated that different millirobots could be constructed with the M-spray adapting to various environment, surface conditions and obstacles. We hope this construction strategy can contribute to the development and application of millirobots in different fields, such as active transportation, moveable sensor and devices, particularly for the tasks in limited space," said Dr Shen.
Source and top image: City University of Hong Kong