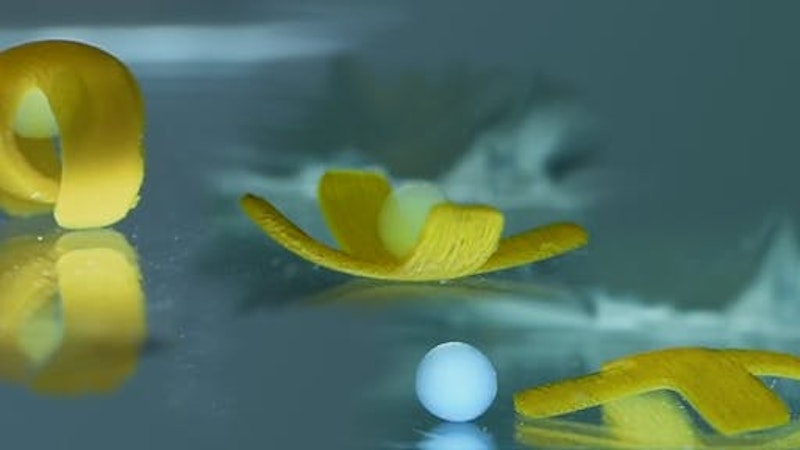 Northwestern University researchers have developed a first-of-its-kind life-like material that acts as a soft robot. It can walk at human speed, pick up and transport cargo to a new location, climb up hills and even break-dance to release a particle. Nearly 90% water by weight, the centimeter-sized robot moves without complex hardware, hydraulics or electricity. Instead, it is activated by light and walks in the direction of an external rotating magnetic field.
Resembling a four-legged octopus, the robot functions inside a water-filled tank, making it ideal for use in aquatic environments. The researchers imagine customizing the movements of miniature robots to help catalyze different chemical reactions and then pump out the valuable products. The robots also could be molecularly designed to recognize and actively remove unwanted particles in specific environments, or to use their mechanical movements and locomotion to precisely deliver bio-therapeutics or cells to specific tissues. For more information see the IDTechEx report on Mobile Robots, Autonomous Vehicles, and Drones in Logistics, Warehousing, and Delivery 2020-2040.
"Conventional robots are typically heavy machines with lots of hardware and electronics that are unable to interact safely with soft structures, including humans," said Samuel I. Stupp, who led the experimental research. "We have designed soft materials with molecular intelligence to enable them to behave like robots of any size and perform useful functions in tiny spaces, underwater or underground."
"By combining walking and steering motions together, we can program specific sequences of magnetic fields, which remotely operate the robot and direct it to follow paths on flat or inclined surfaces," added Monica Olvera de la Cruz, who led the theoretical work. "This programmable feature allows us to direct the robot through narrow passages with complex routes."
New advances
The study builds on Stupp's previous work to design "robotic soft matter" that imitates living sea creatures. In the previous study, published earlier this year, the robotic material could bend over time scales of minutes and crawl on a surface by taking one step every 12 hours. Now, the current breakthrough allows the robot to walk with human speed — about one step per second — and respond to magnetic fields that steer these materials to follow specific trajectories.
By coupling responses to light and magnetic fields, the researchers designed a robot that also can pick up cargo and deliver it to a destination by walking or rolling. Then it drops the cargo at the new location by either inverting its shape — allowing smooth payloads to gently slide off the robot — or performing a spinning "break dance" to dislodge and release stickier objects.
"The design of the new materials that imitate living creatures allows not only a faster response but also the performance of more sophisticated functions," Stupp said. "We can change the shape and add legs to the synthetic creatures, and give these life-like materials new walking gaits and smarter behaviors. This makes them highly versatile and amenable to different tasks."
How it works
The secret to the robot's precise movement and agility lies within its water-filled structure and the embedded skeleton of aligned nickel filaments that are ferromagnetic. The soft component is a molecularly designed network with parts that allow it to respond to light, hold or expel water in its interior, and have just the right stiffness to respond rapidly to magnetic fields.
The Northwestern team used chemical synthesis to program the molecules within the hydrogel to respond to light. When exposed to light, the robot's molecules become hydrophobic (repelling water), causing the water molecules to escape. This conversion causes the robot to "come alive" by bending from a flat position to "standing." The researchers discovered that this bending enables the material to respond rapidly to rotating magnetic fields, activating its ability to walk fast. When the light turns off, the molecules revert back to their original state and the robot goes flat, but it is ready anytime for a new cycle of activity under a magnetic field when prompted by an LED.
The new soft robot is 90% water by weight
When exposed to rotating magnetic fields, the embedded skeleton in the bent robot exerts cyclic forces on the soft molecular network and activates the legs. The rotating field can be programmed to navigate the robot along a pre-determined path.
"Using theory and computation, we can calculate the response to light and magnetic fields," Olvera de la Cruz said. "This allows us to predict and program walking trajectories with great accuracy."
Future applications
Stupp and Olvera de la Cruz imagine these soft robotic materials potentially could be used to create objects for many applications, including chemical production, new tools for environmentally important technologies or as smart biomaterials for highly advanced medicine.
"Eventually, we'd like to make armies of microrobots that could perform a complicated task in a coordinated way," Stupp said. "We can tweak them molecularly to interact with one another to imitate swarming of birds and bacteria in nature or schools of fish in the ocean. The molecular versatility of the platform could lead to applications that have not been conceived at this point."
Source and top image: Northwestern University