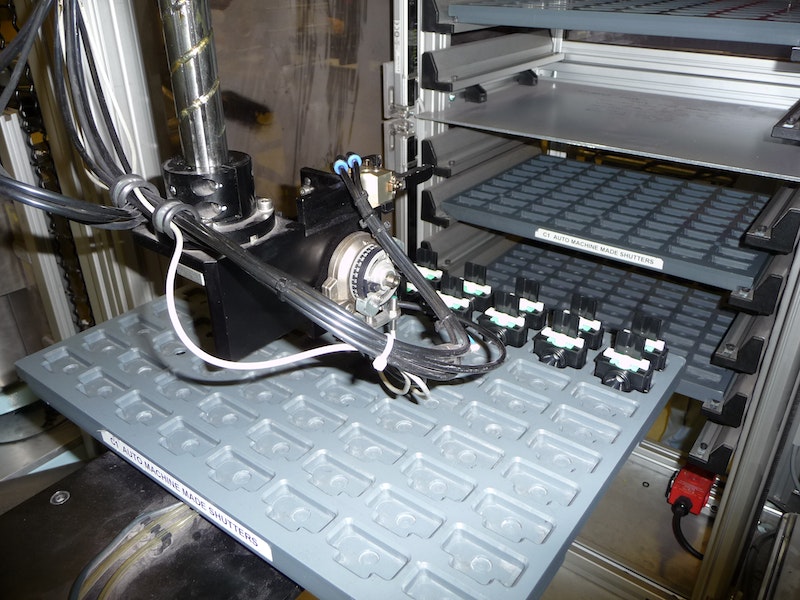 In an industrial context, the word automation is often, inaccurately, used to mean only industrial robotics. In fact, it refers to everything from inverter driven conveyor systems to advanced manufacturing software. Here, in its truest sense, it means controlling a process automatically; without human intervention. It's little wonder then that Ricoh, one of the world's leaders in office automation solutions, applies that ethos holistically across its business. One example of this is its investment in industrial robotics at its manufacturing arm, Ricoh UK Products Ltd in Telford, which has improved profitability and increased efficiency.
The company's holistic approach to automation and efficiency was demonstrated when it began building a new production line for colour toner cartridges to be used on one of its office machines. Ricoh began by investigating a way of using industrial robotics to make manufacturing the toner cartridge shutters a simple process.
Ricoh approached Evershed Robotics initially, who suggested using a combination of a Toshiba Machine TH650 SCARA robots, a Toshiba Machine Cartesian robot to work with their six bowl feeders and a rotary index table. According to Matt Talbot, one of the company's design engineers, the objective of the automated element of the line is to assemble a shutter to open and close the cap on the cartridge. The shutter itself contains five parts which have to be assembled. For more information see the IDTechEx report on Mobile Robots, Autonomous Vehicles, and Drones in Logistics, Warehousing, and Delivery 2020-2040.
To meet the production demands Ricoh has to assemble the shutter in 7.5 seconds. The company uses a rotary table, surrounded with various pieces of automated equipment, to assemble the device. After the parts are removed from it, they are stacked in trays, before being moved on into the next element of the assembly line. Control is managed by an Omron PLC, which communicates easily with the Toshiba Machine SCARAs.
"Some of the seals can be easily dislodged so we needed quite a precise system," offered Talbot. "The SCARA robot uses sensitive parallel grippers to pick a raw body from a bowl feeder and place it on the table. Then, from the next unit clockwise around the table it picks up a completed assembly. This assembly is then rotated through ninety degrees so it's in the correct position to be packed and secured."
The packing trays are located on a Cartesian robot arm, held there using a vacuum attachment, and the 72 units are arrayed in rows of eight by nine. This robot arm presents the tray to a common position and it stays there until it's completely loaded. The tray is then replaced back into the magazine from which it came. The Cartesian then selects the next tray down, moving down its vertical axis.
The magazines are replenished manually and the full trays are taken out and stored or moved onto the next step of the process. To ensure personnel safety, there are a series of light guards to stop the operator opening the door. If the door is opened, the robot is prevented from entering the area by the light guards. Because the throughput of the system is so high, reliability is crucial at Ricoh. There is a constant demand for cartridges and a failure in production could lead to problems in the supply chain. To avoid such problems, Ricoh UK Products keeps a stock of finished components in case of system break down.
The installation of the system was exceptionally straightforward, with mechanical installation taking just half a day. According to Talbot, wiring and testing took nearly a week and further developments in reducing cycle time and improving system efficiency accounted for no more than a couple of additional days. The system has more than paid back its installation time in improved efficiency already.
"Without automation, the cost of doing this job manually would be very high, and the quality of the assembled parts could not be guaranteed," explained Talbot. "Also, because it's so intensively repetitive, this kind of job is made for automation. However, while it was cost that originally prompted us to invest in robotics, we have since become keen advocates of their simplicity, reliability and profitability. So much so that we've expanded other areas of the line and added three other SCARA robots at the heart of separate systems."
The definition of automation applied at Ricoh UK Products is an extremely progressive one. However, this isn't only the result of the manufacturing company reflecting the automated ethos of the overarching Ricoh business. "I believe that Ricoh have been so successful with their industrial robot installations because the company immediately grasped that it's about making manufacturing easier not more complex," offered Nigel Smith, managing director of TM Robotics. "Once this mental shift has been made, any manufacturer could reap benefits similar to those seen at Ricoh. It's just a case of taking the first step into industrial robotics."
About TM Robotics
TM Robotics has installed thousands of robots in factories throughout the world, including North and South America, India, Russia, Europe, the Middle East, Africa and Australia. Many of the top manufacturing companies depend on TM Robotics' product offerings for their reliability, performance, and overall value. In partnership with Shibaura Machine, TM Robotics is the only company that offers a comprehensive range of all three categories of robots; 6-axis, SCARA, and Cartesian. These are designed and built in-house. TM Robotics delivers cutting-edge solutions, training, and support services for industrial and commercial applications.
For further information please visit www.tmrobotics.co.uk