Secure Human-Robot Collaboration Thanks to Radar 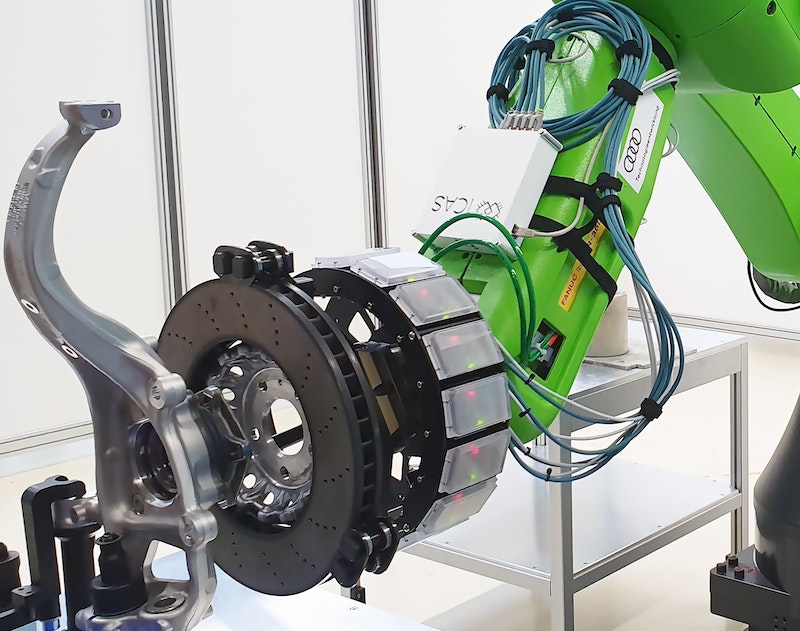 A breakthrough in collaborative robotics is within reach thanks to a joint project coordinated by Fraunhofer IAF. In the project "RoKoRa - Safe Human-Robot Collaboration using High-Resolution Radars", researchers have succeeded in developing an innovative radar technology. It is an enabling technology for functional safety in various robot systems and applications, including high-performance robots.
With the goal of safe human-robot collaboration (HRC), the Fraunhofer Institute for Applied Solid State Physics IAF and six partners launched the project "RoKoRa - Safe Human-Robot Collaboration using High Resolution Radars" in 2017. Since then, there has been a lot of movement in the HRC market and although a large range of collaborative robots, so-called cobots, has developed, the big breakthrough has not yet happened. The reason for this are the strict safety regulations, which do not make it easy for high-performance robots and can only be followed at a great loss of efficiency by common sensor solutions. For further information see the IDTechEx report on Automotive Radar 2020-2040: Devices, Materials, Processing, AI, Markets, and Players.
At the successful conclusion of the "RoKoRa" project in December 2020, a remote 3D sensor solution was demonstrated that could lead to a breakthrough in HRC. As an enabling technology, it promises enormous advances in both industrial cobot technology and service robotics.
Radar monitoring of the collaborative space
Due to the high demands on human safety, only lightweight robots have been used in HRC to date. Due to the sensor solutions currently available, these robots are dependent on power and force limitations. However, in order to ensure that HRC is not only safe but also efficient, the project partners of "RoKoRa" have developed a remote 3D safety sensor system that, compared to conventional sensor solutions, monitors the entire collaborative space at a greater distance and enables dynamic adaptation of the robot's speed and direction of movement.
The demonstrator, which was developed in the course of "RoKoRa", shows a radar sensor ring with an accompanying sensor node. It allows reliable 360° distance measurement even in fog, smoke, dust and other optical influences and can even penetrate dielectric objects. As a result, it not only has a greater measurement range than common capacitive sensors, but also increased robustness compared to optical alternatives. It also enables large and powerful robots with higher payloads to interact with humans in shorter cycle times for the first time.
"Based on the environment measurement by the radar, the optimized motion sequence for the robot can be calculated. It can adapt remotely and dynamically to the interaction with humans," explains Christian Zech, project coordinator at Fraunhofer IAF. The sensor ring can potentially be attached to any relevant robot axis as a plug and play solution. In combination with real-time evaluation, it thus enables safe HRC in almost all process sequences and interactions.
Safety is the top priority
A unique feature of the joint project was the early connection of the sensor components with real robot system technologies while consistently taking relevant safety aspects into account, even at the research level. To ensure this, the project was actively supported by the industrial user AUDI AG, the robot manufacturer FANUC Deutschland GmbH and the Institute for Occupational Safety and Health of the German Social Accident Insurance (DGUV).
Various control mechanisms have been developed and implemented in "RoKoRa's" sensor technology. "The sensor ring currently consists of 16 radar modules, eight of which are sufficient for 360° monitoring. The additional eight modules act as functional redundancy," explains Zech. Data processing in the sensor node also has safety controls: Two processors evaluate the measurement data independently of each other, and a third compares the results before the information is forwarded to the robot's control software. This ensures the safety of the system not only during measurement, but also during data processing.
The project was funded by the German Federal Ministry of Education and Research (BMBF) and consisted of seven project partners: the Fraunhofer Institute for Applied Solid State Physics IAF, the Fraunhofer Institute for Algorithms and Scientific Computing SCAI, IMST GmbH, the University of Kassel, FANUC Deutschland GmbH, the Institute for Occupational Safety and Health of the German Social Accident Insurance (DGUV) and AUDI AG.
Source and top image: Fraunhofer IPF