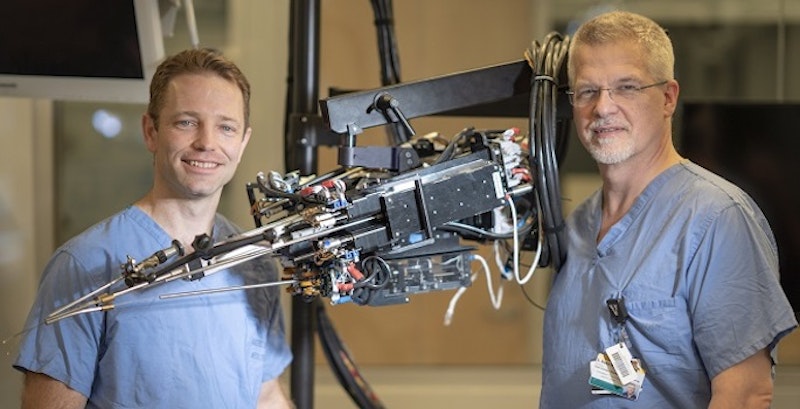 Researchers at the Vanderbilt Institute for Surgery and Engineering have developed a minuscule robot that could revolutionize surgical procedures for treating prostate cancer, which affects one in nine men in the United States. Using a lifelike model, the team demonstrated that the surgical robot could not only remove the prostate gland and tissues through the urethra, but also accomplish the difficult step of suturing the bladder to the urethra.
A typical radical prostatectomy, which is the standard treatment for prostate cancer, requires cutting through the abdomen to reach the prostate. This cutting and exposure of healthy tissue and nerves can cause incontinence and erectile dysfunction in some who undergo the procedure. There are no current alternative endoscopic removal techniques because there are no available instruments that allow surgical dexterity at such a small scale. For further information see the IDTechEx report on Innovations in Robotic Surgery 2020-2030: Technologies, Players & Markets.
Robert Webster, Richard A. Schroeder Professor of Mechanical Engineering and associate professor of medicine and urology, has spent his career developing the concentric tube robots that have made this dexterity through an endoscope possible. He and Duke Herrell, professor of urology and biomedical and mechanical engineering, have developed a surgical robotic platform with two arms made from telescoping needle-size tubes and manipulated by software control techniques.
Following its invention in 2005, Webster and now Herrell, along with a team of Vanderbilt researchers including Assistant Professor of Urology Nick Kavoussi, graduate student Dominick Ropella, postdoctoral scholar Ernar Amanov and fellow Naren Nimmaggada, have further developed the prototype robot into a usable tool that works within the urethra, which is a fraction of an inch in diameter.
"The biggest source of the challenge we have been trying to solve is the size of the urethra," said Webster, also a VISE faculty affiliate in the Medical Engineering and Discovery Lab. "Sewing in an area this size is a very technical challenge. We're working on a scale so small that no other instruments can perform this procedure reliably."
After removing the prostate through the urethra, surgeons are able to manipulate the concentric tube robot to precisely suture the urethra to the neck of the bladder. The procedure—called an anastomosis—is one of the most challenging steps and is crucial to recovery of urinary function. Herrell and Webster also suspect that leaving surrounding structures intact, including support ligaments and nerves for sexual function, with less trauma and traction will reduce rates of complications from surgery.
During the procedure, a rigid endoscope brings the two concentric tube manipulator arms to the urethra. Once delivered, the needle arm pierces and pulls a suture through the tissue. The second arm grasps the suture and brings it back to the bladder. Within seven to eight stitches the anastomosis portion of the procedure is complete, explained Webster, who is also professor of electrical engineering, neurological surgery and otolaryngology head and neck surgery.
Of developing of this technique, Webster said, "It's the unplanned interactions between surgeons and engineers at VISE that make all the difference in our work. The origin of this idea came from Herrell wondering aloud what would happen if a laser he uses were added to one of our robotic devices and the instruments shrunk to fit within the standard endoscope profile. VISE facilitates a lot of these brainstorming interactions, which are the seeds of transformative new ideas."
In the future, the MEDLab will continue experimenting with the procedure and its applicability to suturing other minuscule areas within the body. In addition to this work, Webster and Herrell's other surgical invention aimed at urologic and gynecologic surgeries is being commercialized through their startup Virtuoso Surgical, licensed by Vanderbilt.
Source and top image: Vanderbilt University