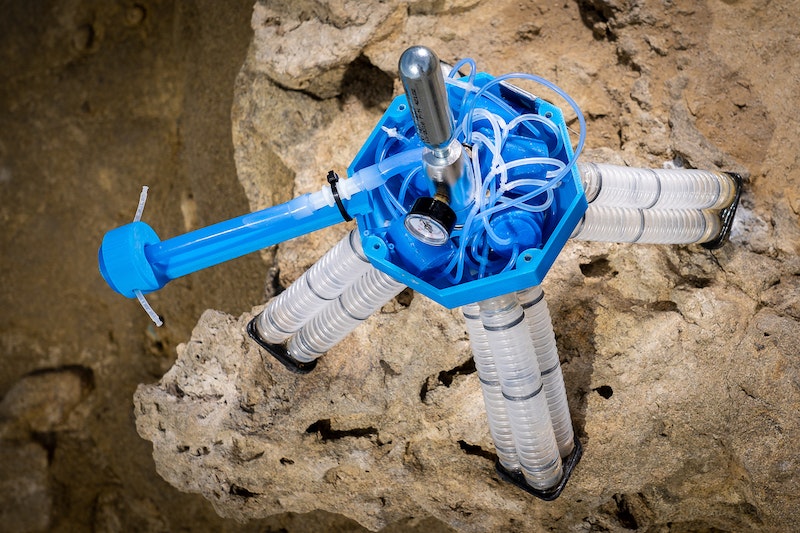 Engineers at the University of California San Diego have created a four-legged soft robot that doesn't need any electronics to work. The robot only needs a constant source of pressurized air for all its functions, including its controls and locomotion systems.
The team, led by Michael T. Tolley, a professor of mechanical engineering at the Jacobs School of Engineering at UC San Diego, details its findings in the Feb. 17, 2021 issue of the journal Science Robotics.
"This work represents a fundamental yet significant step towards fully-autonomous, electronics-free walking robots," said Dylan Drotman, a Ph.D. student in Tolley's research group and the paper's first author. For further information see the IDTechEx report on Mobile Robots, Autonomous Vehicles, and Drones in Logistics, Warehousing, and Delivery 2020-2040.
Applications include low-cost robotics for entertainment, such as toys, and robots that can operate in environments where electronics cannot function, such as MRI machines or mine shafts. Soft robots are of particular interest because they easily adapt to their environment and operate safely near humans.
Most soft robots are powered by pressurized air and are controlled by electronic circuits. But this approach requires complex components like circuit boards, valves and pumps—often outside the robot's body. These components, which constitute the robot's brains and nervous system, are typically bulky and expensive. By contrast, the UC San Diego robot is controlled by a light-weight, low-cost system of pneumatic circuits, made up of tubes and soft valves, onboard the robot itself. The robot can walk on command or in response to signals it senses from the environment.
"With our approach, you could make a very complex robotic brain," said Tolley, the study's senior author. "Our focus here was to make the simplest air-powered nervous system needed to control walking."
The robot's computational power roughly mimics mammalian reflexes that are driven by a neural response from the spine rather than the brain. The team was inspired by neural circuits found in animals, called central pattern generators, made of very simple elements that can generate rhythmic patterns to control motions like walking and running.
To mimic the generators' functions, engineers built a system of valves that act as oscillators, controlling the order in which pressurized air enters air-powered muscles in the robot's four limbs. Researchers built an innovative component that coordinates the robot's gait by delaying the injection of air into the robot's legs. The robot's gait was inspired by sideneck turtles.
The robot is also equipped with simple mechanical sensors—little soft bubbles filled with fluid placed at the end of booms protruding from the robot's body. When the bubbles are depressed, the fluid flips a valve in the robot that causes it to reverse direction.
The Science Robotics paper builds on previous work by other research groups that developed oscillators and sensors based on pneumatic valves, and adds the components necessary to achieve high-level functions like walking.
Source and top image: UC San Diego