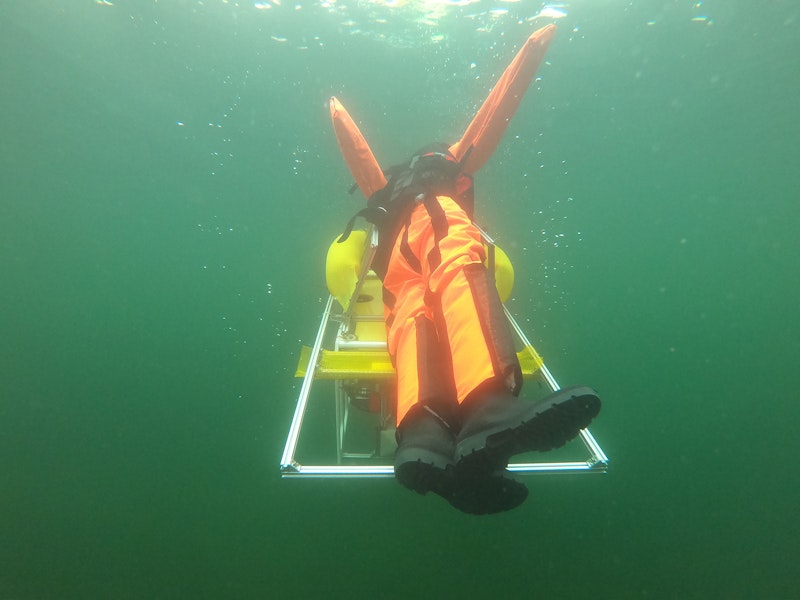 Many swimming pools in Germany do not have enough trained lifeguards and in many places, this skilled labor shortage is even leading to closures. The solution could be a floating underwater rescue robot, which is intended to support rescue staff in emergencies in the future. A research team from the Fraunhofer Institute for Optronics, System Technologies and Image Exploitation IOSB in Ilmenau developed the underwater vehicle with the help of Halle's water rescue service, Wasserrettungsdienstes Halle eV.
According to the German life-saving association, the Deutsche Lebens-Rettungsgesellschaft (DLRG), nearly 420 people drowned in Germany in 2019, with the majority losing their lives in fresh water lakes. However, fatal accidents also occurred in swimming pools. One reason for this is the countrywide lack of trained life-guards to watch over pools. A team of researchers from the Institute for Advanced Systems Technology (AST) of Fraunhofer IOSB is aiming to improve this situation, by developing an aquatic robot, the only one of its kind worldwide. This robot will assist lifeguards and lifesavers, and rescue swimmers in emergencies. The scientists have used their years of expertise in the area of underwater robotics to develop this autonomous system. They have already designed an autonomous underwater vehicle that has won numerous awards - DEDAVE. For further information see the IDTechEx report on Mobile Robots, Autonomous Vehicles, and Drones in Logistics, Warehousing, and Delivery 2020-2040.
"There are typical postures that you can use to recognize when someone is in danger," says computer scientist Helge Renkewitz, who led the already finished project in close collaboration with Wasserrettungsdienst Halle eV.
The project was funded by the German Federal Ministry for Economic Affairs and Energy (BMWi). Surveillance cameras mounted on the swimming pool's ceiling register the movement patterns and position of the drowning person in the pool, and send the coordinates to the robot. It is safely stored away from prying eyes in a docking station on the swimming pool floor, which opens in an emergency. Once the vehicle has reached its destination, it locates the endangered person and carries them to the surface. A mechanism for fixing the rescuee in place prevents lifeless bodies from sliding down as they surface. This mechanism can also be mounted on other underwater vehicles.
Successful open-water testing
At swimming lakes, drones and zeppelin systems take on the task of the surveillance cameras. "These drones and advertising balloons can easily be fitted with cameras," says Renkewitz. For rescues in swimming lakes where the visibility is restricted, the underwater vehicle must be equipped with acoustic sensors instead of optical ones. Sound wave echoes can be used to determine people's positions and orientation so precisely that the robot can autonomously head for the target person and pick them up.
This has been proven to work in practice, through the very impressive open-water testing that researchers conducted at the Hufeisensee lake in Halle (Saale). An 80-kilogram dummy was deposited at a depth of three meters. The robot then picked it up, secured it in place, brought it to the surface within a second, and carried it via the shortest route - a distance of 40 meters - to shore, where the rescue team was already waiting. When the robot is informed of an emergency, a signal alerts the team immediately. "The full rescue operation lasted just over two minutes. Casualties must be resuscitated within five minutes to avoid long-term damages of the brain. We were able to stay within this critical time frame without any problems," says Renkewitz.
The future outlook
Equipped with batteries, motor, cameras, and optical and navigational sensors, the current system is 90 centimeters long, 50 centimeters high, and 50 centimeters wide. The objective of Renkewitz's team is to further reduce the size of the rescue system and build different versions for use in swimming pools and lakes. They aim to make it smaller, lighter, and more cost-effective than the current prototype, which is based on a pre-existing underwater vehicle. Instead, the future robot will have the streamlined design of a manta ray.
A patent has already been filed for the aquatic robot. In modified versions, it can take on further tasks - such as offshore and dam wall inspections or being used to monitor the health of fish in fish farms. "Our underwater vehicles have a very broad range of applications. For example, they are also suitable for detecting and verifying archaeological artefacts at the bottom of lakes," explain the researchers.
Source and top image: Fraunhofer-Gesellschaft