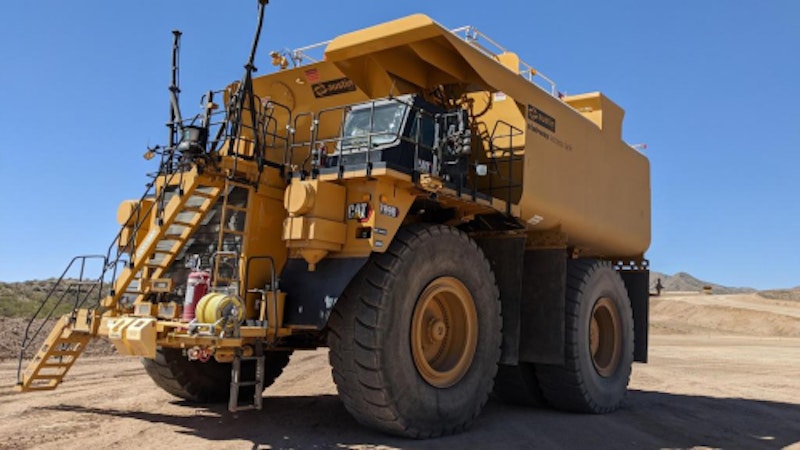 Rio Tinto will deploy the world's first fully autonomous water trucks at its $2.6 billion Gudai-Darri iron ore mine in Western Australia's Pilbara region. The new vehicles, primarily used for dust suppression on site, will enhance productivity by enabling mine operations to digitally track water consumption and reduce waste.
Developed through a successful collaboration with leading equipment manufacturer, Caterpillar, three water trucks will join Gudai-Darri's fleet of Caterpillar heavy mobile equipment including autonomous haul trucks and production drills. The vehicle's intelligent on-board system detects dry and dusty conditions on site, triggering the application of water to roads to keep them in good condition. For further information see the IDTechEx report on Electric Vehicles and Robotics in Mining 2020-2030.
The refilling process is also completely automated with the water trucks recognising when it is time to refill, prompting them to self-drive to the water stand, park and top-up before returning to the field. They boast a 160,000-litre tank capacity, a 33 per cent increase on Rio Tinto's largest water truck which has a tank capacity of 120,000-litres.
Once deployed, the water trucks will be integrated into Rio Tinto's existing Autonomous Haulage System which has been shown to significantly improve safety by reducing the risks associated with operators working around heavy machinery.
Rio Tinto Iron Ore chief executive Simon Trott said "We have worked closely with Caterpillar to safely and successfully deploy the world's first fully autonomous water truck. Water spraying is a vital part of mining operations and this new technology will improve productivity and reduce water usage across our operations. The continued expansion of our autonomous fleet helps improve safety and continues Rio Tinto's efforts to adopt world-leading technology to enhance our operations and realise our vision of making Gudai-Darri one of the world's most technologically advanced mines."
Caterpillar Resource Industries Group President Denise Johnson added "We are pleased to work with Rio Tinto to introduce the next innovation in mining automation. Rio continues to pioneer technology advancements and the water truck, working in conjunction with the autonomous hauling trucks and drills, will further accelerate Rio Tinto's site performance. This is another important step in our continual journey in autonomous solutions for our customers."
Gudai-Darri is 100 per cent owned by Rio Tinto, is located approximately 35 kilometres north-west of Rio Tinto's Yandicoogina mine site, and about 110 kilometres from the town of Newman in the Pilbara region of Western Australia. Construction continues to progress with production ramp-up on track for early 2022. Once complete, the mine will have an annual capacity of 43 million tonnes, underpinning production of the Pilbara Blend, Rio Tinto's flagship iron ore product.
Source and top image: Rio Tinto