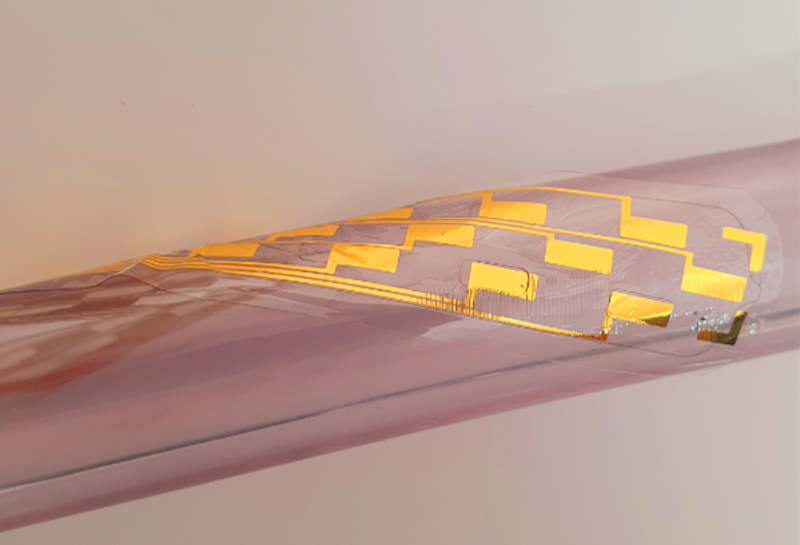 A team of engineers and clinicians has developed an ultra-thin, inflatable device that can be used to treat the most severe forms of pain without the need for invasive surgery. The device, developed by researchers at the University of Cambridge, uses a combination of soft robotic fabrication techniques, ultra-thin electronics and microfluidics. The device is so thin - about the width of a human hair - that it can be rolled up into a tiny cylinder, inserted into a needle, and implanted into the epidural space of the spinal column, the same area where injections are administered to control pain during childbirth.
Once correctly positioned, the device is inflated with water or air so that it unrolls like a tiny air mattress, covering a large section of the spinal cord. When connected to a pulse generator, the ultra-thin electrodes start sending small electrical currents to the spinal cord, which disrupt pain signals. Early tests of the device suggest that it could be an effective treatment for many forms of severe pain - including leg and back pain - which are not remedied by painkillers. It could also be adapted into a potential treatment for paralysis or Parkinson's disease. However, extensive tests and clinical trials will be required before the device can be used on patients. For further information see the IDTechEx report on Flexible Electronics in Healthcare 2020-2030.
Although other types of spinal cord stimulation devices are currently used to treat severe pain, the most effective of these devices are bulky and require invasive surgery, while current keyhole devices are far less effective at treating pain. By combining the clinical effectiveness of the surgical devices and the ease of implantation of the keyhole devices, the Cambridge-developed device could be an effective, long-term solution to intractable pain, which affects millions worldwide. The results are reported in the journal Science Advances.
Pain is something that everyone experiences, and for the vast majority of people, it is temporary and treatable. However, for some, pain becomes debilitating. In the UK, back pain is the leading cause of disability, costing the economy around £12 billion per year. In the US, the Centers for Disease Control and Prevention estimates that as many as one in 12 Americans suffer from intractable back pain, which does not respond to conventional treatments such as non-steroidal anti-inflammatory drugs (NSAIDs) or opioids. Spinal cord stimulation (SCS) is an option for those who suffer from intractable back pain or other types of neuropathic pain, but despite its effectiveness, its use is limited, with just 50,000 procedures carried out worldwide each year.
"Spinal cord stimulation is a treatment of last resort, for those whose pain has become so severe that it prevents them from carrying out everyday activities," said Dr Damiano Barone from Cambridge's Department of Clinical Neurosciences, one of the paper's senior authors. "However, the two main types of SCS devices both have flaws, which may be one reason their use is limited, even though millions struggle with chronic pain every day."
The most effective SCS device in clinical use is a paddle-type device, which covers a wide area of the spinal cord but is bulky and requires invasive surgery under general anaesthetic. The other type of device can be implanted with a needle and only requires local anaesthetic, but it covers a smaller area and is less clinically effective than a paddle-type device.
"Our goal was to make something that's the best of both worlds - a device that's clinically effective but that doesn't require complex and risky surgery," said Dr Christopher Proctor from Cambridge's Department of Engineering, the paper's other senior author. "This could help bring this life-changing treatment option to many more people."
"In order to end up with something that can be implanted with a needle, we needed to make the device as thin as possible," said co-first author Ben Woodington, also from the Department of Engineering.
The researchers used a combination of manufacturing techniques to build their device: flexible electronics used in the semiconductor industry; tiny microfluidic channels used in drug delivery; and shape-changing materials used in soft robotics. Their finished device is just 60 microns thick - thin enough that it can be rolled up and placed in a needle for implantation. However, after implantation, the device expands out to cover a wide area of the spinal cord, thanks to the microfluidic channels.
"Thin-film electronics aren't new, but incorporating fluid chambers is what makes our device unique - this allows it to be inflated into a paddle-type shape once it is inside the patient," said Proctor.
"Our earlier versions were actually so thin that they were invisible to x-rays, which the surgeon would need to use to confirm they're in the right place before inflating the device," said Woodington. "We added some bismuth particles to make it visible without increasing the thickness too much. Designing a device is one thing, but putting it into surgical use is quite another."
The researchers validated their device in vitro and on a human cadaver model. They are currently working with a manufacturing partner to further develop and scale up their device and are hoping to begin tests in patients within two to three years.
"The way we make the device means that we can also incorporate additional components - we could add more electrodes or make it bigger in order to cover larger areas of the spine with increased accuracy," said Barone. "This adaptability could make our SCS device a potential treatment for paralysis following spinal cord injury or stroke or movement disorders such as Parkinson's disease. An effective device that doesn't require invasive surgery could bring relief to so many people."
"This technology has the potential to transform clinical treatment, significantly improve pain management for so many people, and reach patients who cannot be treated with existing devices," said Dr Rachel Atfield, Commercialisation Manager at Cambridge Enterprise, the University's commercialisation company, which has patented the device. 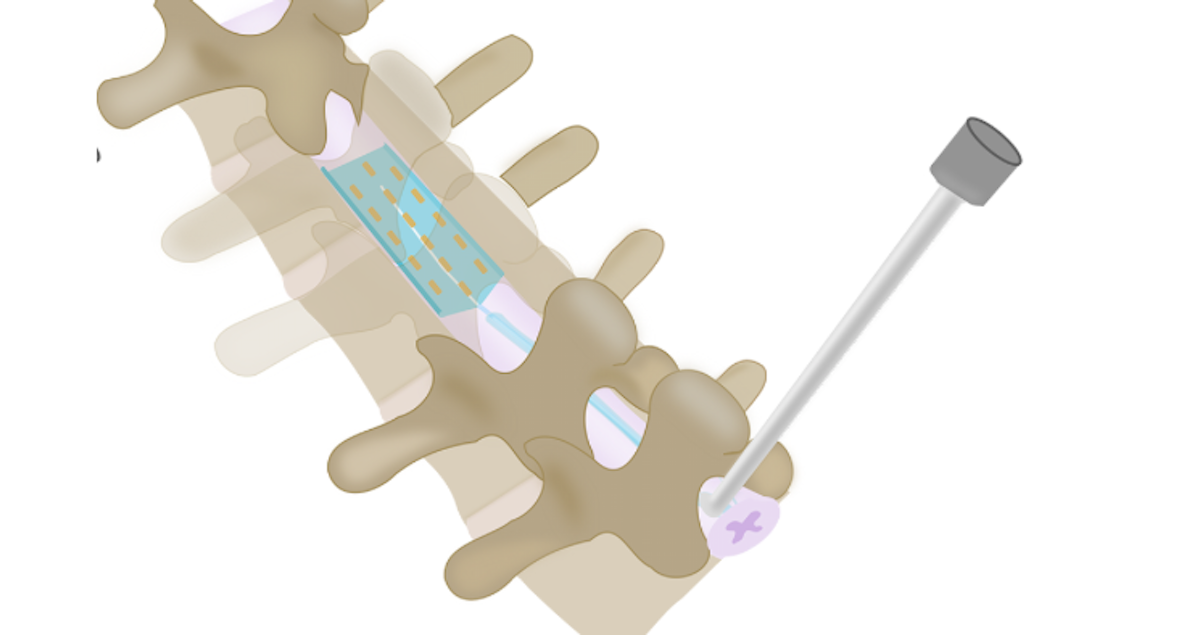 Source and images: University of Cambridge