Experiencing Touch Over the Internet 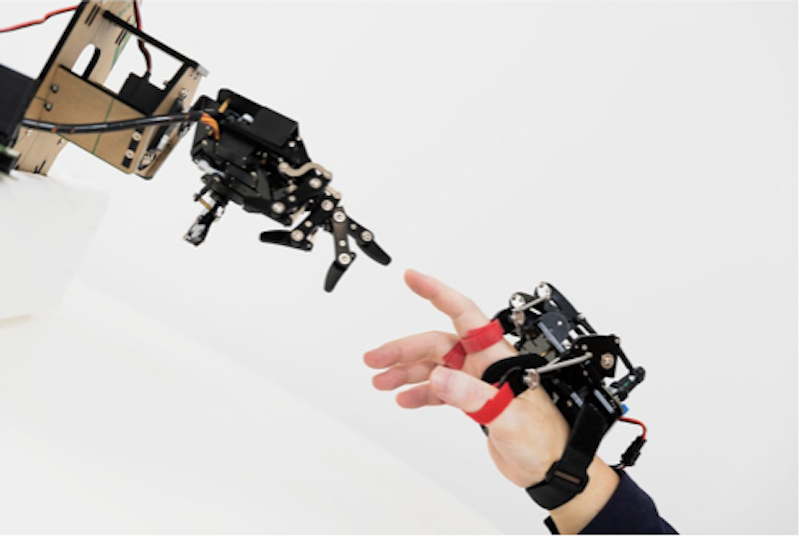 Engineer and Internet of Things expert, Dr Zhanwei Hou is developing an ultra-fast communication method to facilitate Tactile Internet, a technology which he hopes will one day allow users to experience touch over the internet.
For many, the ability to see and hear our family, friends and colleagues using digital devices like mobile phones and video-calls has long been a reality - never more so than during the pandemic. But one day, we may also be able to reach out and touch someone miles away. A researcher within the University of Sydney's Centre for IoT and Telecommunications, Dr Zhanwei Hou, is making great strides in the field of Tactile Internet, developing a low-latency communication method - one which would reduce communication delays - which he hopes will one day allow users to experience touch over the internet.
"My collaborators and I are developing a low-latency communication technology which we hope will get us closer to developing a method to allow geographically separated families to "touch" over the internet," said Dr Hou, who is an electrical and information engineering expert.
How would it work?
For a person to touch something or someone remotely using the Tactile Internet, a user would wear a highly sensitive glove, stylus or other type of tactile device, which can render the sense of touch and transfer that sensation to the user. At the other end, an actuator device, such as a robotic avatar, would mimic the movement of the human operator and collect the touch feedback using tactile sensors.
"Tactile Internet could also have more promising applications, such as helping consumers feel a fabric when online shopping, conducting emergency repairs on factory automation, diagnosing a medical condition for a remote patient or even conducting repairs on space infrastructure from the earth," said Dr Hou.
The challenge
Dr Hou and his collaborators, including award-winning IoT expert, Professor Branka Vucetic, are designing a new method involving algorithms to achieve zero user-experienced delay for Tactile Internet.
"Tactile communication and touch applications will be at the heart of 6G technology and "industry 5.0" -which are based on next-generation technologies aimed to improve interactions and collaboration between humankind and machines. To achieve this, our technology is using deep learning to increase reliability and reduce latency for optimised communications," said Professor Vucetic.
Transmitting sensations of touch from one location to another requires ultra-low latency and ultra-high reliability. Latency, in computing, electrical and information engineering, is the delay between a user's action and the time it takes to be transmitted or reproduced.
"The current internet mainly supports the transmission of visual and audio media. For Tactile Internet to work, we need to reduce latency and increase precision so that there is no perceptible lag," said Dr Hou. "To use human biology as an example, if a human hand touches something, there is no perceptible lag in that touch transmitting to the brain, which means for us it feels instantaneous. For Tactile Internet to work, we need to reduce latency and increase precision so that there is no perceptible lag," he said. "Although 5G technology provides ultra-reliable low-latency communication for radio access networks, for long-distance communication of Tactile Internet, the major bottleneck is the speed of light which is known as the "upper limit for speed", meaning nothing can travel faster than light. Light or radio frequency signals can travel 200 kilometres in the fibre or 300 kilometres in the air per every 1 millisecond. This means that if the communication distance is larger than 300 kilometres, the propagation delay of light of radio frequency signals alone is much larger than the 1 millisecond delay requirement," he said. For further information see the IDTechEx report on 5G Technology, Market and Forecasts 2020-2030.
A personal motivation
In October 2020, Dr Hou and his wife became parents for the first time to a little boy, however because Dr Hou's parents live in China, strict border restrictions have meant they have not yet been able to meet their grandson in person.
"Due to worldwide travel bans and closed borders, my parents in China have never had the opportunity to cuddle or hold their only grandchild, which has been difficult for all of us," said Dr Hou. "Although our family communicates over video-calls and we update my parents regularly with photos of our son, what they want more than anything is to pinch his chubby arms and lull him to sleep. While we hope my parents will be able to meet their grandson soon, in the future we hope our research can contribute to a viable Tactile Internet that would allow families to hug and colleagues to shake hands while geographically separated."
Source and top image: University of Sydney