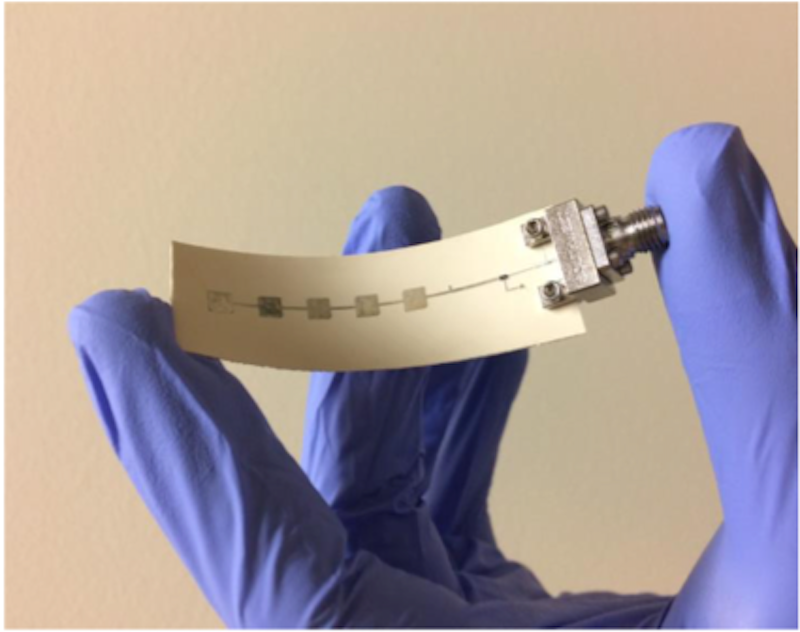 The promise of 5G Internet of Things (IoT) networks requires more scalable and robust communication system - ones that deliver drastically higher data rates and lower power consumption per device.
Backscatter radios ― passive sensors that reflect rather than radiate energy ― are known for their low-cost, low-complexity, and battery-free operation, making them a potential key enabler of this future although they typically feature low data rates and their performance strongly depends on the surrounding environment.
Researchers at the Georgia Institute of Technology, Nokia Bell Labs, and Heriot-Watt University have found a low-cost way for backscatter radios to support high-throughput communication and 5G-speed Gb/sec data transfer using only a single transistor when previously it required expensive and multiple stacked transistors. For further information see the IDTechEx report on 5G Technology, Market and Forecasts 2020-2030.
Employing a unique modulation approach in the 5G 24/28 Gigahertz (GHz) bandwidth, the researchers have shown that these passive devices can transfer data safely and robustly from virtually any environment. The findings were reported in the journal Nature Electronics.
Traditionally, mmWave communications, called the extremely high frequency band, is considered "the last mile" for broadband, with directive point-to-point and point-to-multipoint wireless links. This spectrum band offers many advantages, including wide available GHz bandwidth, which enables very large communication rates, and the ability to implement electrically large antenna arrays, enabling on- demand beamforming capabilities. However, such mmWave systems depend on high-cost components and systems.

The Struggle for Simplicity Versus Cost

"Typically, it was simplicity against cost. You could either do very simple things with one transistor or you need multiple transistors for more complex features, which made these systems very expensive," said Emmanouil (Manos) Tentzeris, Ken Byers Professor in Flexible Electronics in Georgia Tech's School of Electrical and Computer Engineering (ECE). "Now we've enhanced the complexity, making it very powerful but very low cost, so we're getting the best of both worlds."
"Our breakthrough is being able to communicate over 5G/millimeter-wave (mmWave) frequencies without actually having a full mmWave radio transmitter - only a single mmWave transistor is needed along much lower frequency electronics, such as the ones found in cell phones or WiFi devices. Lower operating frequency keeps the electronics' power consumption and silicon cost low," added first author Ioannis (John) Kimionis, a Georgia Tech Ph.D. graduate now a member of technical staff at Nokia Bell Labs. "Our work is scalable for any type of digital modulation and can be applied to any fixed or mobile device."
The researchers are the first to use a backscatter radio for gigabit-data rate mmWave communications, while minimizing the front-end complexity to a single high-frequency transistor. Their breakthrough included the modulation as well as adding more intelligence to the signal that is driving the device.
"We kept the same RF front-end for scaling up the data rate without adding more transistors to our modulator, which makes it a scalable communicator," Kimionis said, adding that their emonstration showed how a single mmWave transistor can support a wide range of modulation formats.

The technology opens up a host of IoT 5G applications, including energy harvesting, which Georgia Tech researchers recently demonstrated using a specialized Rotman lens that collects 5G electromagnetic energy from all directions.
Tentzeris said additional applications for the backscatter technology could include "rugged" high-speed personal area networks with zero-power wearable/implantable sensors for monitoring oxygen or glucose levels in the blood or cardiac/EEG functions; smart home sensors that monitor temperature, chemicals, gases, and humidity; and smart agricultural applications for detecting frost on crops, analyzing soil nutrients, or even livestock tracking.
The researchers developed an early proof of concept of this backscatter modulation, which won third prize at the 2016 Nokia Bell Labs Prize. At the time, Kimionis was a Georgia Tech ECE doctoral researcher working with Tentzeris in the ATHENA lab, which advances novel technologies for electromagnetic, wireless, RF, millimeter-wave, and sub-terahertz applications.

For Kimionis, the backscatter technology breakthrough reflects his goal to "democratize communications."
"Throughout my career I've looked for ways to make all types of communication more cost efficient and more energy efficient. Now because the whole front end of our solution was created at such low complexity, it is compatible with printed electronics. We can literally print a mmWave antenna array that can support a low-power, low-complexity, and low-cost transmitter."
Tentzeris considers affordable printing crucial to making their backscattering technology market viable. Georgia Tech is a pioneer in inkjet printing on virtually every material (paper, plastics, glass, flexible/organic substrates) and was one of the first research institutes to use 3D printing up to millimeter-frequency ranges back in 2002.
Other researchers who collaborated on this work included Apostolos Georgiadis and Spyridon Nektarios Daskalakis, both former visiting professors at Georgia Tech now on the faculty of Herriot-Watt University's School of Engineering and Physical Sciences in Edinburgh.
CITATION: J. Kimionis, et al., "A printed millimetre-wave modulator and antenna array for backscatter communications at gigabit data rates." (Nature Electronics, 2021) https://doi.org/10.1038/s41928-021- 00588-8.
Media Relations Contacts: Anne Wainscott-Sargent asargent7@gatech.edu and Tracey Reeves treeves@gatech.edu.
Writer: Anne Wainscott-Sargent
Source and top image: Georgia Tech

Top Technology Trends 2021 - with IDTechEx Insights
The Next Stage in Thermal Materials for 5G
Upcoming Webinar - The Development of 5g in 2021 and Its Prospects
5G From 2022 Onward: Deployment Status, Industry Challenges, & Market