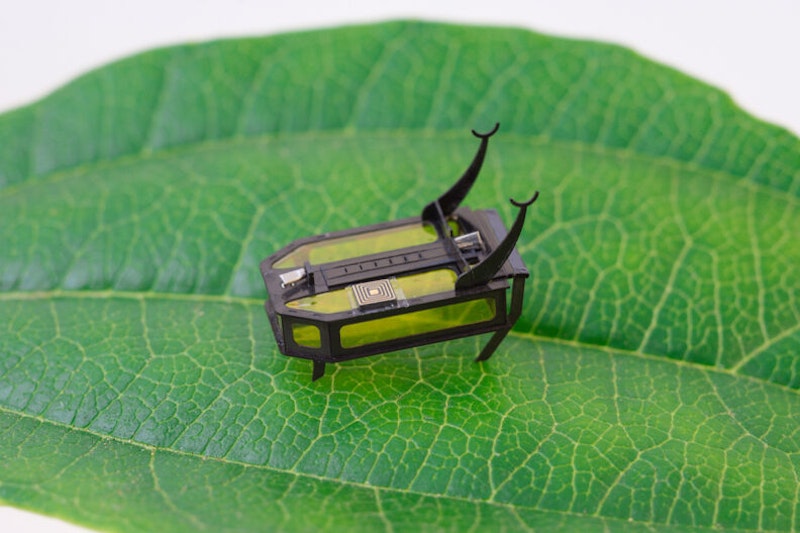 Néstor O. Pérez-Arancibia, Flaherty Associate Professor in Engineering in the School of Mechanical and Materials Engineering at Washington State University, has developed robots that are inspired by nature — from the world's smallest beetle-like robot to an entirely soft robot that uses air flow and pneumatics instead of electronics to move.
Pérez-Arancibia's Robeetle will be included in the upcoming Guinness Book of World Records. The Robeetle, featured on the cover of Science Robotics, is an 88 milligram robot, weighing in at about three grains of rice and not much bigger than a real beetle. The lightest crawling robot ever developed, the Robeetle is uniquely powered by the catalytic combustion of methanol and can climb slopes, navigate various surfaces, and haul objects that weight up to 2.6 times its own weight. For further information see the IDTechEx report on Mobile Robots, Autonomous Vehicles, and Drones in Logistics, Warehousing, and Delivery 2020-2040.
Pérez-Arancibia's research papers have also been nominated for or won numerous best paper awards. Most recently, he and one of his Ph.D. students received a 2020 IEEE Robotics and Automation Letters Best Paper Award for their work in which they introduced a new paradigm for soft robots. The researchers used pneumatic valves and air flow to allow the robot to coordinate its muscles without relying on an electronics-based control system.
Pérez-Arancibia hopes his robots can someday be used to solve tricky engineering problems by emulating talented creatures like squid or mice that can seamlessly squeeze themselves like liquid into tight places. Biology, particularly insects, still surpass their robotic counterparts in almost every aspect, but he hopes to develop robots in the next decade that are significantly better at mimicking natural systems.
Pérez-Arancibia comes to Washington State University from University of Southern California (USC), where he founded and directed the Autonomous Microrobotic Systems Laboratory for several years. During his time at USC, he advised and graduated seven Ph.D. students and his research was mostly funded by the National Science Foundation and the Defense Advanced Research Projects Agency. He received his Ph.D. from the University of California, Los Angeles, and was a postdoctoral fellow in the Microrobotics Laboratory and the Wyss Institute for Biologically Inspired Engineering at Harvard University.
With interest in a wide variety of subjects, he first began working in robotics while at Harvard. He has enjoyed the study of robotics because it has allowed him to learn about the natural world and biology while also solving intricate engineering challenges. He is very excited to be joining WSU and looks forward to working with students on new robotic projects.
Source and top image: Washington State University