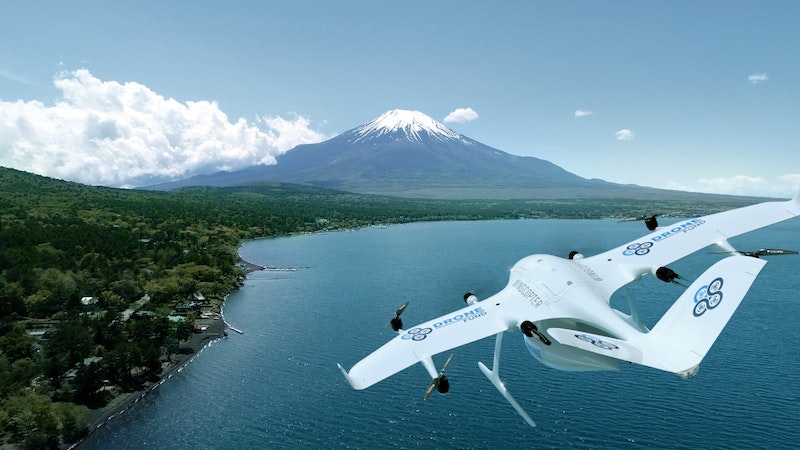 German drone delivery pioneer Wingcopter continues to fly high, announcing that it has received an investment from DRONE FUND. DRONE FUND is a Japan-based venture capital company specializing in drone- and air mobility-related startups. The investment is made out of DRONE FUND's JPY 10 billion/USD 90 million strong third fund, called DRONE FUND III (officially DRONE FUND III Investment Limited Partnership), and comes in the run-up of Wingcopter's Series B investment round. It is DRONE FUND's first investment in eVTOL drone technology as well as its first investment in a German company.
Wingcopter already has deep ties with Japan. Last year, the company signed a partnership agreement with Japan's biggest airline ANA. Together with Wingcopter, ANA plans to build a drone delivery network to help improve quality of life in rural areas across the country. Extensive trials have already taken place in the past months. For further information see the IDTechEx report on Drone Market and Industries 2021-2041.
In addition, Wingcopter is about to announce the signing of a strategic partnership agreement with one of the largest Japanese sogo shosha (Japanese general trading companies) through Wingcopter's Authorized Partnership Program (WAPP). The company will act as a distributor and local technical support provider for Wingcopter's newest Unmanned Aircraft System (UAS), the Wingcopter 198, in Japan. The WAPP is Wingcopter's global network of strategic partners. It includes drone operators, resellers, and agents that are trained and allowed to operate, promote, and distribute the world's first triple-drop delivery drone, the Wingcopter 198.
Japan is an attractive market for Wingcopter as the country is very progressive with respect to the integration of drones into everyday life. Already in 2017, the Japanese government recognized the extraordinary potential drones have to offer in many different sectors of life and business and created a first national commercial drone roadmap, the so-called Roadmap for the Application and Technology Development of UAVs in Japan, and has continuously adapted it ever since.
"This investment comes at a time when we are intensifying our efforts on the Japanese market. We are convinced that the DRONE FUND team will open doors, allowing us to bring drone delivery services to more customers in Japan and beyond. It also makes us really proud that we are the only eVTOL drone company in their portfolio of about 50 investments. I believe the investment is testament to the fact that the Wingcopter 198 is really leading the way of delivery drone technology," says Tom Plümmer, CEO of Wingcopter.
Kotaro Chiba, Founder and Managing Partner of DRONE FUND, comments: "We have seen the air logistics network in Japan developing at an accelerated pace with the lifting of the ban on Level 3 flights in 2021. Wingcopter is one of the most reliable and cutting-edge eVTOL hardware, software and AI providers in the world, with successful experience in Japan. We are honored to be able to invest in such a great team. We look forward to working with the Wingcopter team to contribute to the development of drone logistics in Japan and abroad."
DRONE FUND joins existing investors Xplorer Capital, Futury Capital, Expa, Hessen Kapital III, and Corecam Capital Partners. Wingcopter is currently in advanced investor discussions for its upcoming Series B round.
About Wingcopter
Wingcopter is an award-winning German manufacturer and service provider of eVTOL, fixed-wing Unmanned Aircraft Systems (UAS) dedicated to improving and saving the lives of people worldwide through impactful commercial and humanitarian applications. The startup is focused on optimizing medical supply chains. In the future, Wingcopter will also deliver packages, tools and spare parts, as well as food and groceries. Thanks to its patented tilt-rotor mechanism, Wingcopter can take off and land vertically like a multicopter, while flying long distances as efficiently and quickly as a fixed-wing aircraft, even in heavy rain and strong wind. In 2020, Wingcopter was named a Technology Pioneer by the World Economic Forum. Wingcopter's investors include Drone Fund, Xplorer Capital, Futury Regio Growth Fund, Futury Ventures, Hessen Kapital III, and Corecam Capital Partners. Find out more at www.wingcopter.com