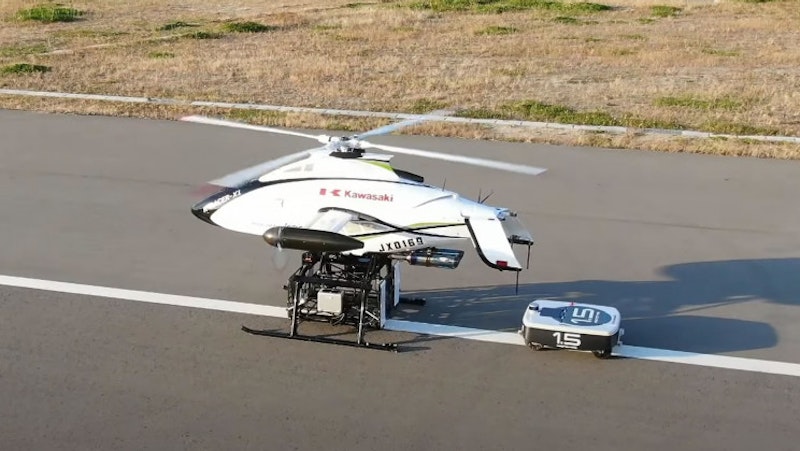 Kawasaki Heavy Industries Ltd announced the successful completion of proof-of-concept testing for unmanned cargo transport by cooperation of its K-RACER (Kawasaki Researching Autonomic Compound to Exceed Rotorcraft) prototype unmanned vertical take-off and landing (VTOL) aircraft and delivery robot. proof-of-concept testing was conducted with the aim of helping to solve societal issues such as labor shortages in the logistics industry.
In its Group Vision 2030, which describes the company's future vision for 2030, Kawasaki specified three areas where it will focus its efforts: "A Safe and Secure Remotely-Connected Society," "Near-Future Mobility" and "Energy and Environmental Solutions." In the area of "Near-Future Mobility," the company has been pursuing development of unmanned VTOLs, delivery robots and so on. For further information see the IDTechEx report on Air Taxis: Electric Vertical Take-Off and Landing Aircraft 2021-2041.
Kawasaki's latest unmanned VTOL adopts improvements to an aircraft flight-tested in 2020. It is able to transport a 100-kilogram payload and equipped with a delivery robot loading and unloading mechanism. For its power unit, the aircraft has a Ninja H2R motorcycle supercharged engine built by Kawasaki Motors, Ltd. The delivery robot used together with the unmanned VTOL is based on a delivery robot designed to achieve smooth, stable operations even on rough and bumpy roads, developed utilizing Kawasaki's knowledge in robotics and technologies behind the off-road capabilities of its motorcycles and side-by-sides. This delivery robot was modified to enable boarding onto an unmanned VTOL.
proof-of-concept testing simulated a continuous, interlinked sequence of unmanned delivery operations in which the delivery robot was loaded with cargo and automatically boarded the unmanned VTOL, followed by automated flight with the delivery robot onboard, and then landing, automatic delivery robot disembarkation and delivery of the cargo to the final destination. Testing was carried out with the eventual future goal of delivery operations without any human-worker involvement.
Kawasaki's unmanned VTOL is scheduled to be used in the Unmanned VTOL Cargo Transport Platform Development Project being carried out on commission from Ina City, Nagano Prefecture.
Responding to labor shortages in the logistics industry and other challenges faced by society, Kawasaki will make use of results and information gained from its latest proof-of-concept testing to realize a rapid cargo transport system that is not affected by road-traffic conditions or topographic features such as seas, mountains and rivers, and reliable logistics services to locations deep in the mountains or on remote islands. In these ways, the company hopes to help society overcome its challenges.
Overview of PoC Testing:
Source and top image: Kawasaki