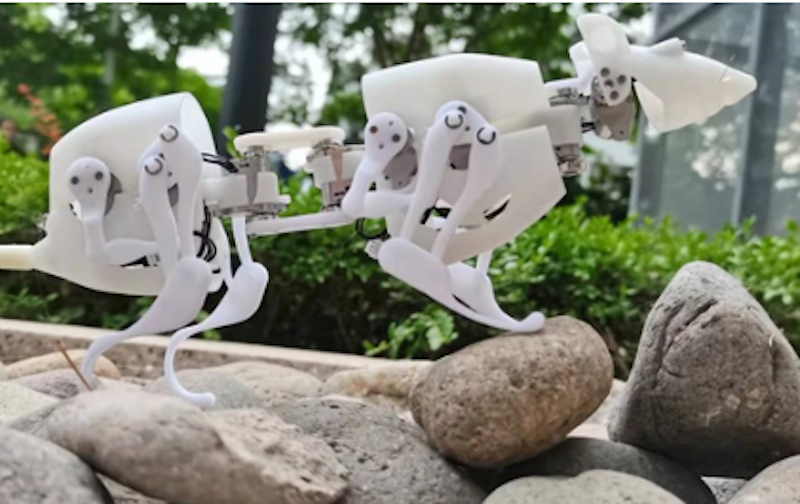 Legged robots are very promising for use in real-world applications, but their operation in narrow spaces is still challenging. Large quadruped robots like BigDog and ANYmal have shown excellent adaptability and load capacity but cannot enter narrow spaces, while micro quadruped robots such as sub-2g robots could enter the narrow spaces but failed to perform tasks due to their low absolute payload capacity. One solution for enhancing their environmental adaptability is to design a small-sized biomimetic robot capable of performing multiple motions and carrying payloads. In this case, rats (Rattus norvegicus) that live in caves have attracted a great amount of attention owing to their unrivalled agility and adaptability. Lots of efforts have been made trying to mimic the morphology or motion characteristics of rats.
Recently, a team led by Prof. Qing Shi from Beijing Institute of Technology, China, has developed a novel robotic rat named SQuRo (small-sized quadruped robotic rat), which was made available online on April 07, 2022 in the journal IEEE Transactions on Robotics. Prof. Qing Shi from Beijing Institute of Technology in China, has spent more than ten years in this field since he was a PhD Student at Waseda University. By investing significant time in replicating certain properties and functions of the biological systems, Prof. Shi's team has developed robots that are able to reproduce their movement or behavior. Through bioinspired design, they have developed wheeled robotic rat capable of multiple rat-like behaviors. Recently, they replaced the wheels by legs to further enhance the movement agility. In this study, experimental results reveal that the legged robot SQuRo is capable of mimicking the motion of actual rats inside narrow spaces. For further information see the IDTechEx report on Mobile Robotics in Logistics, Warehousing and Delivery 2022-2042.
Rats are capable of adapting to narrow spaces owing to their elongated slim body and unrivalled agility. Hence, to copy the movement agility, they make full use of the morphology and motion characteristics of rats moving in caves. They firstly extracted the key movement joints (KMJs) of rats and completed the (degree of freedom) DOF configuration. Specifically, they designed 2 DOFs in each limb to reproduce the limb movement, 2 DOFs in waist and 2DOFs in head to replicate the flexible spine movement. Benefiting from a long and flexible spine, SQuRo can bend its body and quickly turn around.
Furthermore, the particular advantage of rats lies in their agile mobility, which represents various typical motions. Therefore, apart from copying the morphology of rats, a robotic rat also features the locomotion characteristics of rats. To this end, they proposed a hierarchical open-loop controller to achieve multimodal motion similar to that of rats. The control framework mainly consists of three layers: 1) a multi-motion planner with four basic motion modes and established a direct relationship between the control variable and ground reaction forces (GRFs); 2) parameter optimization with the consideration of the stability and actuation limits; 3) trajectory generation of each joint. The control framework makes agile movements and fast transitions possible.
Owing to the biomimetic flexible structure and multimodal motion control, SQuRo can perform various motions, such as crouching-to-standing, walking, crawling, and turning, and can recover after falling by controlling its limbs and cervical parts to appropriately adjust its center of mass (CoM). Moreover, through field tests, SQuRo successfully passed through an irregular narrow passage (inner width of 90 mm), crossed an obstacle with a height of 30 mm, and achieved stable locomotion on a slope with an inclination of 15°, which demonstrates its potential application to inspection tasks inside narrow spaces. Compared with state-of-the-art quadruped robots of a similar scale, the newly developed SQuRo has a relatively more elongated, slimmer body and smaller weight. The minimum turning radius of 0.48 body length (BL) is much smaller compared with that of other robots. Moreover, SQuRo can achieve steady locomotion even after carrying a load equal to 91% of its own weight, which demonstrates its superior payload-carrying compared with small-sized quadruped robots. These capabilities allow SQuRo to agilely pass through narrow spaces and rugged terrains and perform tasks, such as detection or transportation in relevant scenarios.
Source and top image: Cactus Communications