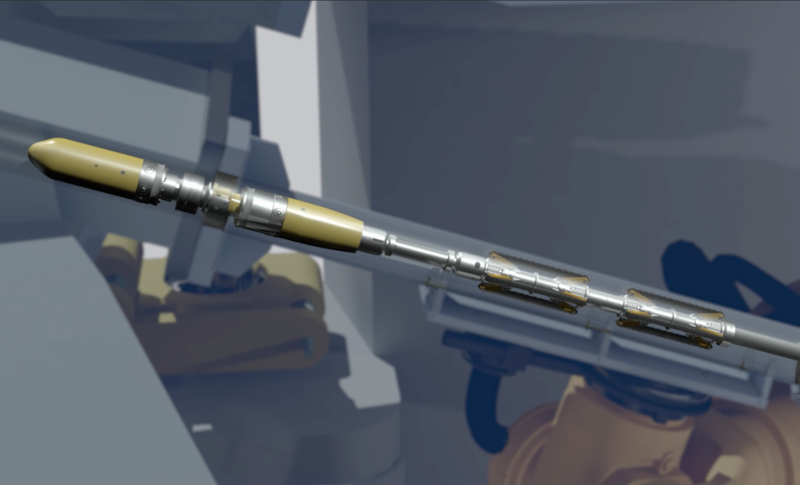 A new laser-welding 'robotic snake' developed by the UK Atomic Energy Authority has demonstrated its capability to operate inside of fusion energy powerplant pipework and is now patented technology. The novel trials at Culham Science Centre are another step forward on the roadmap to delivering safe, sustainable, low carbon fusion energy to the grid.
The £2.7 million, seven-year project by UKAEA's RACE (Remote Applications in Challenging Environments) was delivered as part of EUROfusion's flagship DEMO programme, expected to be ITER's successor. The DEMO snake will be deployed and operated remotely inside a hazardous environment without being touched by humans. It can also work effectively in pipes packed together, with little space for access.
Tristan Tremethick, Lead Mechanical Design Engineer, UKAEA, said: "In fusion machines, pipework has to be connected and disconnected remotely because of the hazardous environment. Pipework in DEMO is extra challenging because of the limited working space. We've been looking at different ways of tackling this and I'm delighted our new snake has passed its first set of trials. The bespoke laser welding tool takes a novel approach and operates inside of the pipework to make best use of the cramped space available. At RACE, we pride ourselves on providing complete solutions to enable operations and protect people in challenging environments, and this is another exciting result on our path to delivering fusion energy."
The project also involved creating an ultrasonic sensor-system to move the snake up and down the pipe to identify each precise working location. A separate launch system gets it inside the pipework remotely. The work shown in this video is the trial of the whole set of equipment working together for the first time.
Tristan Tremethick added: "Ultrasonic sensors enable the snake to find the correct position, where it then clamps to the pipe and performs the weld from the inside. After the weld, the tool retracts and is removed from the pipe where it can be redeployed. Robots are a key part of our mission to deliver low carbon fusion energy, and we need to become skilled in controlling machines like this one remotely. That's because they will be used to maintain fusion energy power plants. We won't be able to send people in, robots will keep them running - it's the future."
RACE has also developed a laser cutting tool operating on the same principles as the snake and both can potentially be used for other industry applications. EUROfusion consortium consists of experts, students and staff from across Europe collaborating to realise fusion energy, co-funded by the European Commission. ITER is a fusion research mega-project, based in the south of France, to further demonstrate the scientific and technological feasibility of fusion energy. For further information see the IDTechEx report on Sensors for Robotics: Technologies, Markets and Forecasts 2017-2027.
About Fusion
Fusion research aims to copy the process that powers the sun for a new large-scale source of low carbon energy here on earth. When light atoms fuse together to form heavier ones, a large amount of energy is released. To do this, a few grams of hydrogen fuels are heated to extreme temperatures, 10 times hotter than the centre of the sun, forming a plasma in which fusion reactions take place. A commercial fusion power station would use the energy produced by fusion reactions to generate electricity. Fusion has huge potential as a low carbon energy source. It is environmentally responsible and safe, using fuel that is abundant and sustainable. Pound for pound it releases nearly four million times more energy than burning coal, oil or gas.
About UKAEA
The UK Atomic Energy Authority (UKAEA) carries out fusion energy research on behalf of the UK Government. UKAEA oversees the UK's fusion programme, headed by the MAST Upgrade (Mega Amp Spherical Tokamak) experiment. It also hosts the world's largest fusion research facility, JET (Joint European Torus), which it operates for scientists from around Europe. More information: https://www.gov.uk/ukaea. Social Media: @UKAEAofficial
RACE
Since opening at Culham in 2016, UKAEA's RACE (Remote Applications in Challenging Environments) facility has conducted R&D into the use of robotics in extreme industrial environments where it is difficult to send people to carry out work. It also supports companies developing their own autonomous systems. RACE is a key centre for implementing the Government's Robotics & Autonomous Systems strategy, which aims to equip the UK to compete in this emerging global industry. More information: https://race.ukaea.uk/
About EUROfusion
EUROfusion is a consortium of 30 research organisations, and behind them around 150 affiliated entities including universities and companies, from 25 European Union member states plus the United Kingdom, Switzerland and Ukraine. Together they work towards a facility that can deliver fusion electricity to the power grid in accordance with the European Research Roadmap to the Realisation of Fusion Energy. The EUROfusion programme has two aims: preparing for ITER experiments and developing concepts for the future European demonstration fusion power plant EU DEMO. Another facet of the EUROfusion programme is to support diverse research projects in participating laboratories through the Enabling Research scheme. For more information, visit: https://www.euro-fusion.org/
Source and top image: UK Atomic Energy Authority