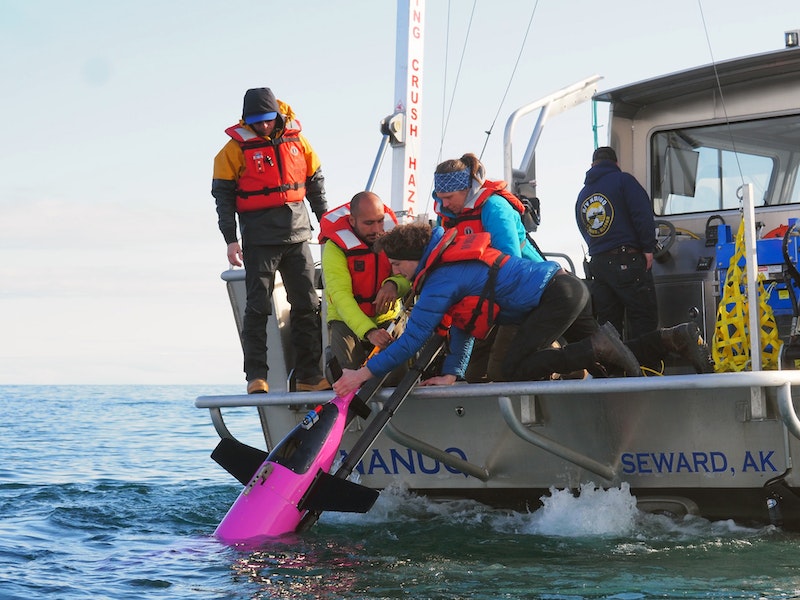 Alaska has a new tool for tracking ocean acidification — a 7-foot-long, bright pink Seaglider. The University of Alaska Fairbanks and its commercial partners are the first U.S. team to measure carbon dioxide, the driving factor in ocean acidification, with an unoccupied underwater vehicle.
Globally, the pH of the ocean is decreasing as humans burn coal, oil and gas. When carbon dioxide from these activities is absorbed by the ocean, it affects the ability of marine organisms to build and maintain their shells and may also change the behavior of some fish. The Gulf of Alaska's cold waters naturally hold more carbon dioxide, so it only takes a little added human-made CO2 to reach a threshold that puts marine organisms at risk. Melting glaciers that dump freshwater into the ocean can further reduce the number of building blocks available for shells.
Despite the urgent risk to commercial, subsistence and sport fishing in Alaska, data are lacking to determine the status of ocean acidification around the state.
"In order to understand how the human-made carbon dioxide in the atmosphere changes the oceans, we also need to know how ocean chemistry varies naturally throughout the year," explained Claudine Hauri, an oceanographer at the UAF International Arctic Research Center.
Technological limitations restricted research in the past. Ocean moorings gathered data at a single location year-round, or ships sampled along transects for several weeks from spring to fall. Although these tools are still needed and provide critical information, large areas of the ocean are not sampled, especially in winter. Hauri and her team devised a plan to fill those data gaps. Working with international commercial partners, they developed a way to integrate a carbon dioxide sensor with a Seaglider that can dive up to 1,000 meters and carry out weekslong missions to remote parts of the ocean in every season. For further information see the IDTechEx report on Service Robots 2022-2032: Technologies, Players & Markets.
"My job is to find the compromise between what the scientists want and what the glider can do," said Ehsan Abdi, an electronics engineer with Advanced Offshore Operations Inc. and Cyprus Subsea. He develops, prepares and operates underwater gliders for long and deep missions.
The integration was no simple task and required specialized skill in mechanical and electronics engineering, as well as in materials science. For example, Abdi had to consider how the heavier sensor changed the buoyancy of the Seaglider while moving through the water. He made adjustments as needed using weights and fabricated material created on a 3D printer. Meanwhile, Jöran Kemme and his colleagues at 4H JENA Engineering redesigned one of the market's most precise carbon dioxide sensors for underwater measurements. The new design, called Contros HydroC CO2, is lighter and more compact, yet its precision still requires a larger size and higher power consumption than the sensors a Seaglider usually carries.
"The most exciting thing is seeing such a big and power-hungry sensor go on such a humble and small glider that was not meant to do stuff like this," said Abdi. "That's why it's challenging, and that's why we've had so many problems. But that's the fun part of it as well."
This spring the science and industry team were in Seward testing the new carbon dioxide Seaglider. They relied on many local partners to test and adjust the glider before sending it to sea. Hauri made sure the glider was balanced correctly while swimming in a tank normally meant for sea lions at the Alaska SeaLife Center. At Alutiiq Pride Marine Institute the team compared measurements taken by the Seaglider to those from instruments used in labs. The Seaglider took its first ride into Resurrection Bay via the UAF Seward Marine Center's research vessel Nanuq. In a series of consecutively deeper dives, the team tested the Seaglider's maneuverability and response to different temperatures and depths, and compared its ability to measure carbon dioxide to ship-based sensors.
Though many hours were spent bobbing in Resurrection Bay adjusting sensors, reprogramming the Seaglider and examining real-time data, the team was driven by the promise of better carbon dioxide measurements in Alaska's oceans and globally. They plan to make the details of the sensor integration available to others so teams around the world can study ocean acidification more efficiently and develop more strategic and innovative responses.
"I'm excited by the possibility of having a whole fleet of these seagliders continuously measuring CO2. It's important to have people from all around the world working on this, especially because it is a worldwide issue," Kemme said.
Source and top image: University of Alaska Fairbanks