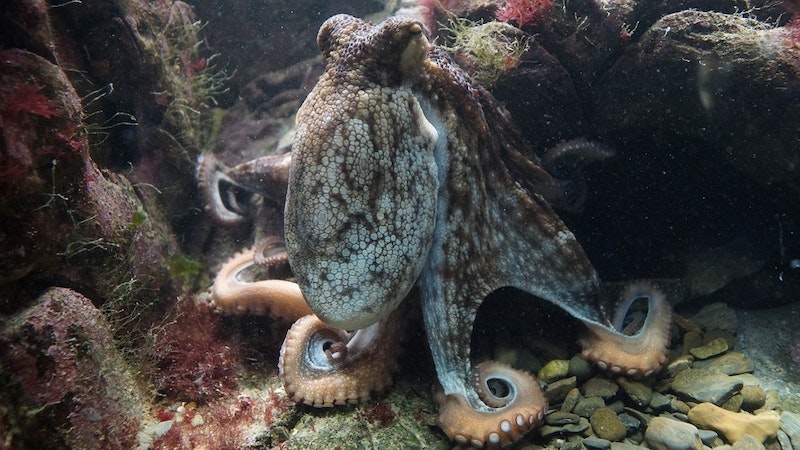 The skin of cephalopods, such as octopuses, squids and cuttlefish, is stretchy and smart, contributing to these creatures' ability to sense and respond to their surroundings. A Penn State-led collaboration has harnessed these properties to create an artificial skin that mimics both the elasticity and the neurologic functions of cephalopod skin, with potential applications for neurorobotics, skin prosthetics, artificial organs and more.   Led by Cunjiang Yu, Dorothy Quiggle Career Development Associate Professor of Engineering Science and Mechanics and Biomedical Engineering, the team published its findings on June 1 in the Proceedings of the National Academy of Sciences.
Cephalopod skin is a soft organ that can endure complex deformations, such as expanding, contracting, bending and twisting. It also possesses cognitive sense-and-respond functions that enable the skin to sense light, react and camouflage its wearer. While artificial skins with either these physical or these cognitive capabilities have existed previously, according to Yu, until now none has simultaneously exhibited both qualities — the combination needed for advanced, artificially intelligent bioelectronic skin devices.   For further information see the IDTechEx report on Flexible, Printed and Organic Electronics 2020-2030: Forecasts, Technologies, Markets.
"Although several artificial camouflage skin devices have been recently developed, they lack critical noncentralized neuromorphic processing and cognition capabilities, and materials with such capabilities lack robust mechanical properties," Yu said. "Our recently developed soft synaptic devices have achieved brain-inspired computing and artificial nervous systems that are sensitive to touch and light that retain these neuromorphic functions when biaxially stretched."
To simultaneously achieve both smartness and stretchability, the researchers constructed synaptic transistors entirely from elastomeric materials. These rubbery semiconductors operate in a similar fashion to neural connections, exchanging critical messages for system-wide needs, impervious to physical changes in the system's structure. The key to creating a soft skin device with both cognitive and stretching capabilities, according to Yu, was using elastomeric rubbery materials for every component. This approach resulted in a device that can successfully exhibit and maintain neurological synaptic behaviors, such as image sensing and memorization, even when stretched, twisted and poked 30% beyond a natural resting state.
"With the recent surge of smart skin devices, implementing neuromorphic functions into these devices opens the door for a future direction toward more powerful biomimetics," Yu said. "This methodology for implementing cognitive functions into smart skin devices could be extrapolated into many other areas, including neuromorphic computing wearables, artificial organs, soft neurorobotics and skin prosthetics for next-generation intelligent systems."
Source: Penn State University
Top image: Pixabay