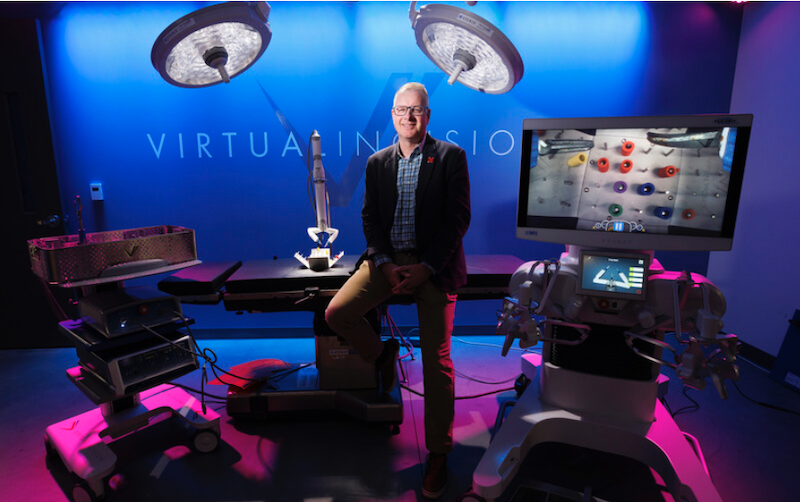 A miniaturized robot invented by Nebraska's Shane Farritor is on scheduled to blast off into space to showcase its skills. NASA recently awarded the University of Nebraska-Lincoln $100,000 through the Established Program to Stimulate Competitive Research (EPSCoR) to ready the surgical robot for a 2024 test mission aboard the International Space Station.
"NASA has been a long-term supporter of this research and, as a culmination of that effort, our robot will have a chance to fly on the International Space Station," said Farritor, professor of engineering.
Farritor is co-founder of Virtual Incision, a startup company based on Nebraska Innovation Campus. For nearly 20 years, he and his colleagues have been developing the tiny surgical robot known as MIRA, short for "miniaturized in vivo robotic assistant." The company has attracted more than $100 million in venture capital investment since its founding in 2006. During the next year, Farritor and engineering graduate student Rachael Wagner will write software, configure MIRA to fit inside a space station experiment locker and exhaustively test the device to make sure it's robust enough to survive launch and its systems will perform as anticipated in space. Then, they will wait a year or so for the robot to get its turn aboard the station. For further information see the IDTechEx report on Innovations in Robotic Surgery 2020-2030: Technologies, Players & Markets.
Wagner, who is from Lincoln, began working with Farritor as an undergraduate student and took a position with Virtual Incision after completing her bachelor's degree in mechanical engineering in 2018. A second graduate student may join the team later in 2022.
MIRA has two key advantages. First, it can be inserted through a small incision, enabling doctors to perform abdominal surgery in a minimally invasive manner. In previous tests, surgeons have successfully used the device to perform colon resections. Secondly, the technology could allow surgeons to work remotely — perhaps someday repairing an astronaut's ruptured appendix on a mission to Mars or removing shrapnel from a soldier injured by an IED thousands of miles distant.
In a previous experiment, retired NASA astronaut Clayton Anderson took the robot's controls while at the Johnson Space Center in Houston, directing MIRA to perform surgery-like tasks in an operating room 900 miles away at the University of Nebraska Medical Center in Omaha.
During its upcoming trip aboard the space station, MIRA will work autonomously, without the guiding hand of a doctor or an astronaut. Inside a microwave oven-sized experiment locker, it will cut tautly stretched rubber bands and push metal rings along a wire, gestures that simulate those used in surgery.
"These simulations are very important because of all the data we will collect during the tests," Wagner said.
It will be the most autonomous operation of the robot so far. Although Farritor anticipates MIRA will function on its own in 50 to 100 years, this mission's goal is not autonomy, but to fine-tune the robot's operation in zero gravity. The device is being programmed to work autonomously to conserve space station communications bandwidth and to minimize the amount of time astronauts spend with the experiment.
"The astronaut flips a switch, the process starts and the robot does its work by itself," Farritor said. "Two hours later, the astronaut switches it off and it's done."
Farritor, who is David and Nancy Lederer Professor of Engineering, serves as chief technology officer of Virtual Incision, founded with Dmitry Oleynikov, a former University of Nebraska Medical Center professor of surgery. In April 2022, Farritor was named the inaugural winner of the University of Nebraska system's intellectual property award, the Faculty IP Innovation and Commercialization Award. Both NASA and the U.S. Army have provided funding for Farritor's robotics research.
"As people go further and deeper into space, they might need to do surgery someday," Farritor said. "We're working toward that goal."
Source and top image: University of Nebraska-Lincoln