Last week Amazon announced that it planned on hiring 100,000 extra workers to meet the rise in demand for online shopping created by Coronavirus-caused shutdowns and social distancing. On 19 March 2020, unions said workers were demanding that Amazon takes their lives seriously. The night before a facility in Queens, NY, had been closed for deep cleaning after an employee tested positive for the virus. There are reports that some Amazon warehouse workers in Italy and Spain have tested positive. In France, several hundred Amazon workers protested to demand better measures to protect their safety. In Italy, there have been calls for a strike. This and similar developments once again bring into focus the motivation, and at times the imperative, to increase automation in the logistics and delivery chain.
IDTechEx have been examining the technological and commercial trends in this field for several years. Their report "Mobile Robots, Autonomous Vehicles, and Drones in Logistics, Warehousing, and Delivery 2020-2040" focuses on automation of movement in every step of the logistics and delivery chain ranging from a warehouse or a factory to the delivery of goods to the final customer destination. This landscape - and therefore, the scope of the report - includes the following:
1. Automated guide carts and vehicles
2. Autonomous mobile industry vehicles (forklifts, tugs, etc.)
3. Goods-to-person automated carts/robots
4. Collaborative autonomous mobile robots
5. Mobile picking robot (regular- and irregular-shaped items)
6. Autonomous trucks (level 4 and 5)
7. Delivery vans and pods (level 4 and 5)
8. Last-mile side-walk delivery robots
9. Delivery drones
The emerging technology research firm finds that this market - in total - will reach $81 and $290 billion in 2030 and 2040, respectively. This is a colossal transfer of value from wage expenses to a combination of capital investments and service subscription to autonomous robots of various types. This staggering headline is, of course, very large, and hides the key individual trends characterizing each technology and use case. In the remainder of this article, IDTechEx analysts seek to highlight the key trends.

Large fleets of robots are already deployed to help automate the goods-to-person step in many fulfilment centres. These robots move racks within robot-only zones, bringing them to manned picking stations.
This is a fast-growing market space. The landscape was set on fire when Amazon acquired Kiva Systems for $775M in 2012, thereby leaving a gap on the market. Today, significant well-funded alternatives such as GeekPlus (389$M), GreyOrange (170$M), and HIK Vision ($6Bn revenue) have emerged, achieving promising and growing deployment figures. The number of start-ups has also increased, especially within the 2015-2017 period.
IDTechEx forecasts the annual unit sales to double within six years. Despite the large deployments already, they assess the real global inflection point to arrive around 2024 beyond at which point the pace of deployment will dramatically accelerate. Indeed, the research firm forecasts that between 2020 and 2030, more than 1 million such robots will be sold accumulatively. It is, therefore, an exciting time.

Another major trend is the use of autonomous mobile robots and vehicles. Autonomous mobile robots are emerging, which offer infrastructure-independent navigation in defined indoor environments. These robots boost productivity and enable many hybrid human-robot interaction modes. They can also bring automation to warehouses and fulfilment centres which were not specifically designed and built to support robotic goods-to-person.
The technology is enabled by better SLAM algorithms. The algorithms - based on different sensors, including stereo camera and 2D lidars - are evolved enough to handle safe autonomous navigation within many structured indoor environments with a high degree of control and predictability.
The technology options however are still many, and choices have long-lasting strategic consequences. The business models are also various and evolving. Some are offering their technology as RaaS (robot as a service).
There have also been some notable recent acquisitions. Amazon acquired a company focused on camera-based navigation, which would enable object detection and classification, and thus more intelligent navigation. Shopify acquired a firm with a full solution, including the entire software stack. Overall, IDTechEx forecasts that more than 200k robots could be sold within the 2020-2030 period (this figure includes those that can perform picking of regularly or irregularly shaped items).
The report "Mobile Robots, Autonomous Vehicles, and Drones in Logistics, Warehousing, and Delivery 2020-2040" provides a comprehensive analysis of all the key players, technologies, and markets. It includes technology roadmaps and twenty-year market forecasts, in unit numbers and revenue, for all the technologies outlined at the beginning of the article (13 forecast lines). It offers a twenty-year model because IDTechEx's technology roadmap suggests that these changes will take place over long timescales. In their detailed forecasts, the report clearly explains the different stages of market growth. 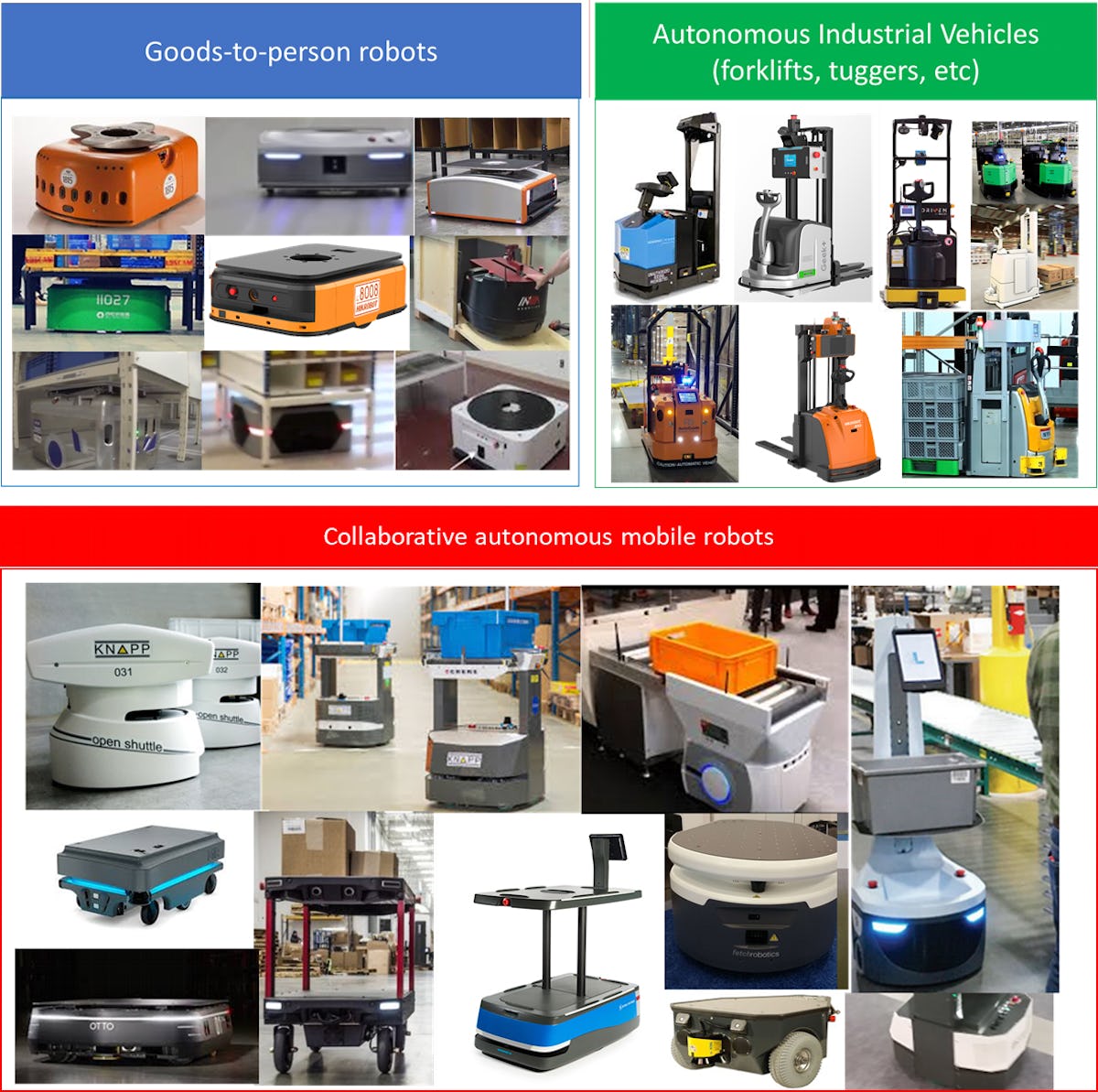 Picking or grasping technology is an essential component of warehouse automation. Today, many firms and research groups are deploying deep learning to enable robots to pick novel and irregularly shaped items rapidly and with high success rates.
A limited number of firms have integrated picking arms on mobile platforms. Today, these mainly pick box-shaped items in known environments. However, progress will bring these technologies to more varied items. It will also allow better integration of the robotic arm with the mobile platform.
In the short term, more learning is required. However, recent advances on the algorithm side suggest that progress will be rapid although the algorithms will need to achieve not just high rates but also high-speed to drive down the ROI on these tools. In the very long term though, IDTechEx forecast that 36% and 38% of AMRs in warehouses sold in 2040 will be able to pick regular - as well as irregular-shaped items, respectively. This points towards a major long-term technology transformation, requiring automation beyond just autonomy of movement. IDTechEx Analysts consider this a major technology development opportunity.

Autonomous forklifts and other industrial vehicles

Autonomous forklifts and tugs are emerging onto the market. The navigation technology has progressed significantly. Naturally, the cost of autonomous forklifts is higher, but the claimed ROI by many suppliers is within 12-18 months. The cost includes the installation and maintenance as well as the cost of the autonomous sensor suite, traction control and drivers, and the software, which can be amortized over a growing deployed fleet. Overall, price parity on an annual operational cost basis is nearly at hand in some high wage territories.
The unit sales here can reach 1.8k in 2020, which seems a high number but still small relative to the addressable market. Over the past 1.5 years, however, this market has also entered the early stages of its growth phase. Analysis and interviews conducted by IDTechEx suggest that inflection point is likely to be reached around 2025-2027. After this point, they project the sales to grow, already exceeding 100k units by 2030. Note that IDTechEx generally develops 20-year forecasts for autonomous mobility as the technology will inevitably take time to be rolled out.

Long-haul trucks are a prime target for autonomous mobility. This is because autonomous mobility can address many industry pain-points and because there is a clear commercial case, unlike passenger vehicles. The first pain point is that there is a shortage of drivers, which could increase to 160k per 2028 in the USA. The second pain point is the operating cost, this is because wages are high, and likely to go up given that demand outstrips supply. Safety requirements limit the number of uninterrupted hours a driver can spend on the road, limiting the productivity of the asset. Finally, the long stretches of highway lend themselves well to autonomous mobility, unlike the chaotic conditions in dense urban driving.
IDTechEx has carefully analyzed the companies and technologies behind autonomous trucking. Their report "Mobile Robots, Autonomous Vehicles, and Drones in Logistics, Warehousing, and Delivery 2020-2040" offers deep technology analysis and granular market forecasts. It is plausible that the deployed trucks could exceed 1300 units by the end of 2020; this is still a small number but shows the direction of travel. The report finds that the deployment of level-4 autonomous trucks will grow slowly until 2025, after which point the growth has the potential to rise rapidly. IDTechEx's estimate suggests that the market could reach 550k level-4 units/year by 2030. Their roadmap suggests that level-5 will remain virtually non-existent for another decade and will only grow beyond 2030. To see the full 2020-2040 forecasts, segmented by autonomy level, please visit www.IDTechEx.com/Mobile. 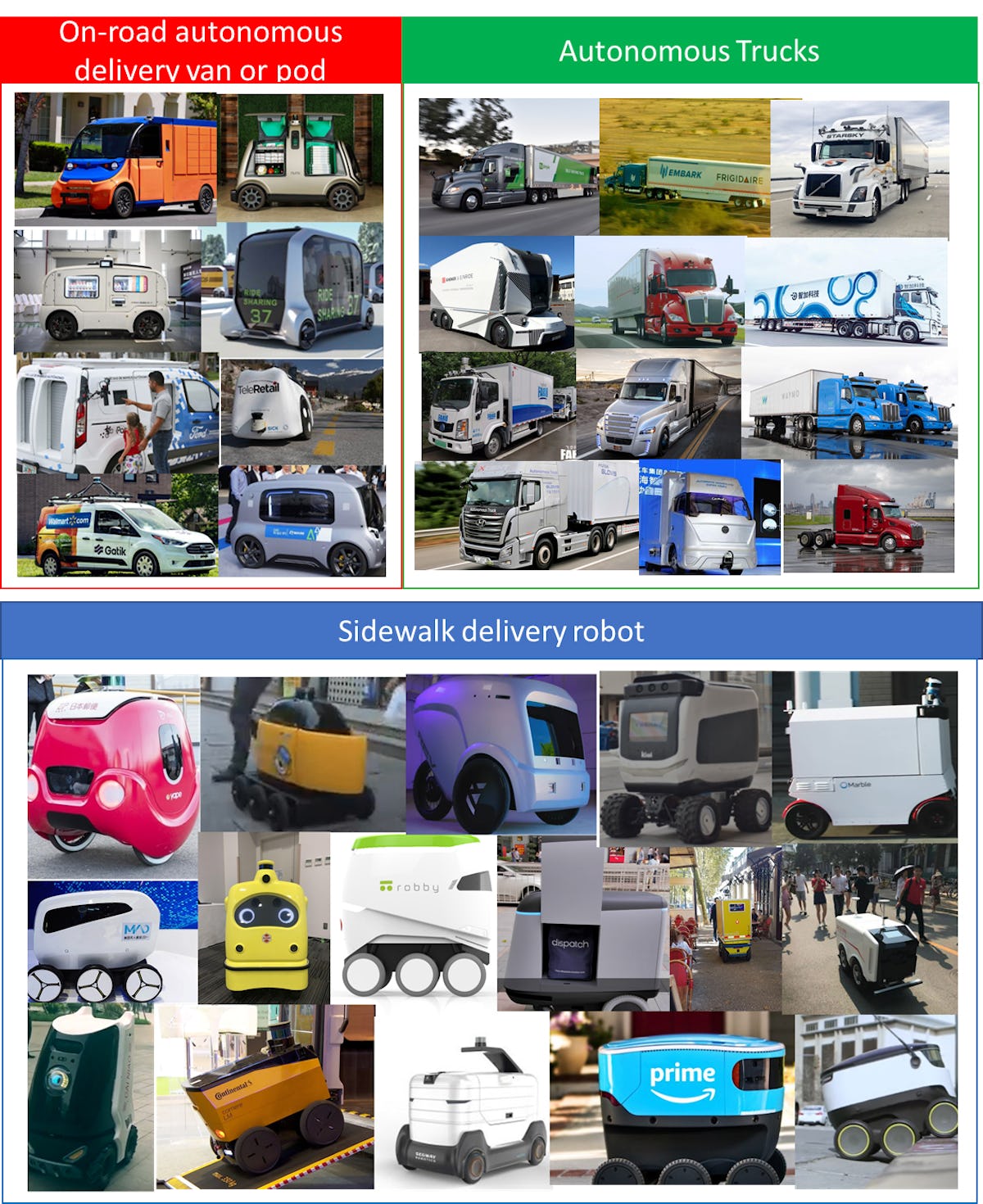 This is an interesting technological frontier. The cost of last-mile delivery is often 50% of the total cost. As such, there is a strong commercial incentive to automate this step to boost productivity. There are two approaches: on-road last-mile delivery vans or pods and side-walk robotic.
The on-road vans and pods share many technological challenges with other on-road autonomous vehicles. The difference however, is that they can operate in limited well-mapped and known-environments and that they can potentially travel at low-speeds. They also will not have passengers on-board, simplifying some of the safety challenges.
IDTechEx's report identifies and profiles the key companies active in this field. They analyze the technological progress, challenges, and innovation opportunity. The report develops short-, medium-, and long-term market forecasts segmented by level of autonomous. It finds that package (or similar) delivery vans and pods will be deployed in small number until 2026. Indeed, the annual deployments will remain below 3k units/year until 2026. The market growth for level-4 vans/pods will then accelerate, especially from 2027 onwards. Level-5 mobility will only arrive from 2032 onwards and even then, only in small numbers.
The side-walk robots have their own unique design and technology challenges. The economics underpinning their business cases are also different. The key for them is extending the autonomy level of the side-walk robots to a point where very large fleets with a very small number of remote human teleoperators can be deployed.
Here too, despite the progress, the deployment will remain small in the short term. IDTechEx forecast that annual deployment will remain around or below 3k unit/annually until 2024, their model however projects a hump in 2025. This is likely because the technology will have reached enough maturity to prove its business case and also to address many of the edge points in its autonomous navigation. The market has the potential to then rapidly accelerate to 30k units/year by 2030. The costs will, of course, be low especially as the camera and lidar costs (if lidar is deployed) will be dramatically reduced and the fleet-to-operator ratio driven up. The money - as forecast in the report - will be in the services which scale with the accumulated fleet size and utilization rate thereof.
This report "Mobile Robots, Autonomous Vehicles, and Drones in Logistics, Warehousing, and Delivery 2020-2040" provides a comprehensive analysis of all the key players, technologies, and markets. It offers technology roadmaps and twenty-year market forecasts, in unit numbers and revenue, for all the technologies outlined above (13 forecast lines). It builds a twenty-year model because IDTechEx's technology roadmap suggests that these changes will take place over long timescales. In the detailed forecasts, the research firm clearly explains the different stages of market growth and outline the key assumptions/conditions as well as data points that underpin the model.