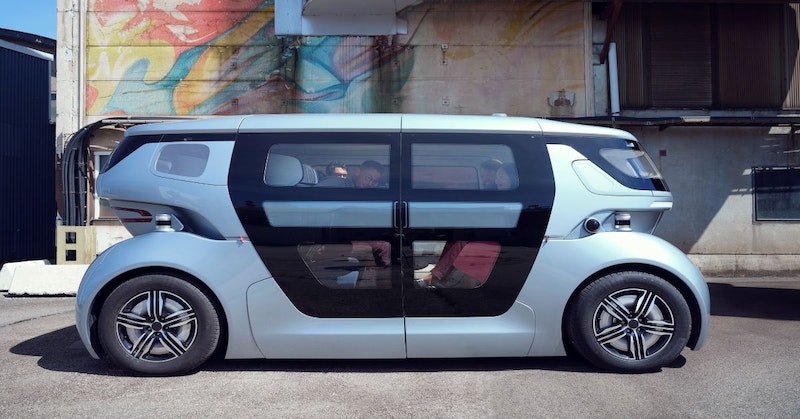 As IDTechEx predicted in its report, "Robot Shuttles and Autonomous Buses 2020-2040", robot shuttles are converging with robotaxis. Robot shuttles are a new type of vehicle that is limited to slow speeds for cities. Being silent, robotic and emission-free, they are expected to be allowed over piazzas and through indoor malls to deliver even children and the severely disabled right to their destination safe and dry. Cleverly, they are special boxy symmetric designs never needing to do a U-turn, so they access the tiniest spaces. They are designed to rapidly reconfigure as "last mile" freight carriers, mobile restaurants, school buses and more and display lucrative wide-area advertising. In contrast, robotaxis are analyzed in the IDTechEx report, "Autonomous Cars and Robotaxis 2020-2040: Players, Technologies and Market Forecast". They are autonomous, road-only taxis going fast and far for a lower cost than manned taxis due to intensive use, some being lent by private owners for part of the day. Physically they are little more than a regular car like a Tesla X.
Now National Electric Vehicle Sweden (NEVS) has presented a mobility ecosystem for autonomous electric vehicles for sharing services, under the name PONS. At the heart of the ecosystem is the autonomous Sango electric vehicle for up to six passengers. NEVS says there is no reason to own an autonomous vehicle. PONS cheaply goes anywhere on city roads. Its new pilot project in Stockholm will operate ten Sango robot shuttles in robotaxi mode. Maximum speed is 15 km/h, later 50 km/h. However, although Toyota will use its E-Palette smart shuttles in its demonstration smart city at the base of Mount Fuji and the Tokyo Olympics, most car makers are ambivalent as both options mean less vehicles need to be manufactured. Leaders in robot shuttles are mainly new companies and they find it easy to get city and financial backing. Time will tell what is the killer concept.
For more information on these reports and for the full portfolio of Robotics research available from IDTechEx please visit www.IDTechEx.com/research/robotics.
IDTechEx guides your strategic business decisions through its Research, Consultancy and Event products, helping you profit from emerging technologies. For more information on IDTechEx Research and Consultancy, contact research@IDTechEx.com or visit www.IDTechEx.com.
Top Image: PONS Sango. Image Source: National Electric Vehicle Sweden (NEVS)