Vertical Farming: How Big is Too Big? 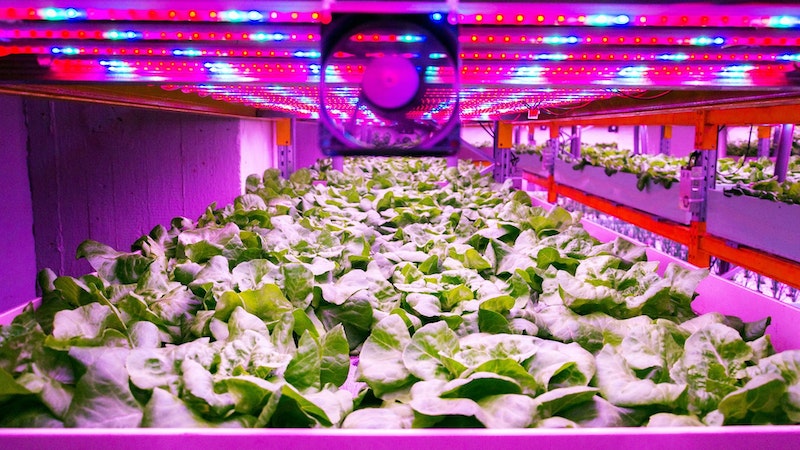 Vertical farming is growing quickly. The concept of vertical farming, the idea that crops can be grown far more efficiently indoors under controlled environmental conditions than would be possible on conventional farmland, has captured the imagination of entrepreneurs and investors alike, with dozens of start-ups being founded across the world raising ever increasing amounts of investor capital. The recent IDTechEx report, "Vertical Farming 2020-2030" explores the technologies and market factors that are shaping this rapidly expanding industry.
An ongoing argument within the industry is question of size - is it better to focus on building a large, highly automated plant factory to minimize production costs, or is a small, more flexible approach the best way to set up a vertical farm?
This question stems from some of the challenges facing the vertical farming industry. Setting up and running a vertical farm is not cheap and many vertical farming companies have struggled to overcoming spiraling labor and power costs, alongside unforeseen logistical complexities, and issues with maintaining an optimum growing environment.
A potential solution to some of these problems is to build a very large vertical farm, which allows the power costs to be averaged out over a large quantity of crops. Additionally, large vertical farms make it easier to justify using advanced automation systems that can help reduce labor costs, with the cost of the automated systems also being spread out over large quantities of crops. These sorts of economies of scale can help a vertical farm begin to reach price parity with a conventional farm, something which has long eluded smaller vertical farms, which are often forced to sell produce in premium categories. Large vertical farms producing large quantities of crops can also be more easily incorporated into existing food supply chain structures, for example next to a supermarket's main distribution center.
One company attempting to use this scale-based approach is Jones Food Company, a British vertical farming start-up that currently operates Europe's largest vertical farm. The company believes that the only way that vertical farming will be successful in the long term is by reaching price parity with conventional farming, which it hopes to achieve through automation and by operating large scale facilities close to distribution centers. The company takes its inspiration from car factories - it is far more cost-effective to produce cars in a large central facility than it would be to produce them in small facilities near the dealerships and Jones Food Company believes this same logic applies to vertical farming. Crops grown in distribution centers are still able to reach consumers rapidly, often within a day of harvest, and the company doesn't believe that the hyper-local model promoted by certain competitors is worth the inefficiencies and costs of many small facilities located in city centers.
Several other vertical farming companies are following this approach, with New Jersey start-up AeroFarms announcing in 2019 that it was investing $42 million to construct a 150,000 square foot facility in Danville, Virginia, which the company claims will be the largest in the world. Jeff Bezos-backed Plenty operates a 52,000 square foot facility in South San Francisco, with the company aiming to maximize production efficiency to improve the economics of vertical farming. 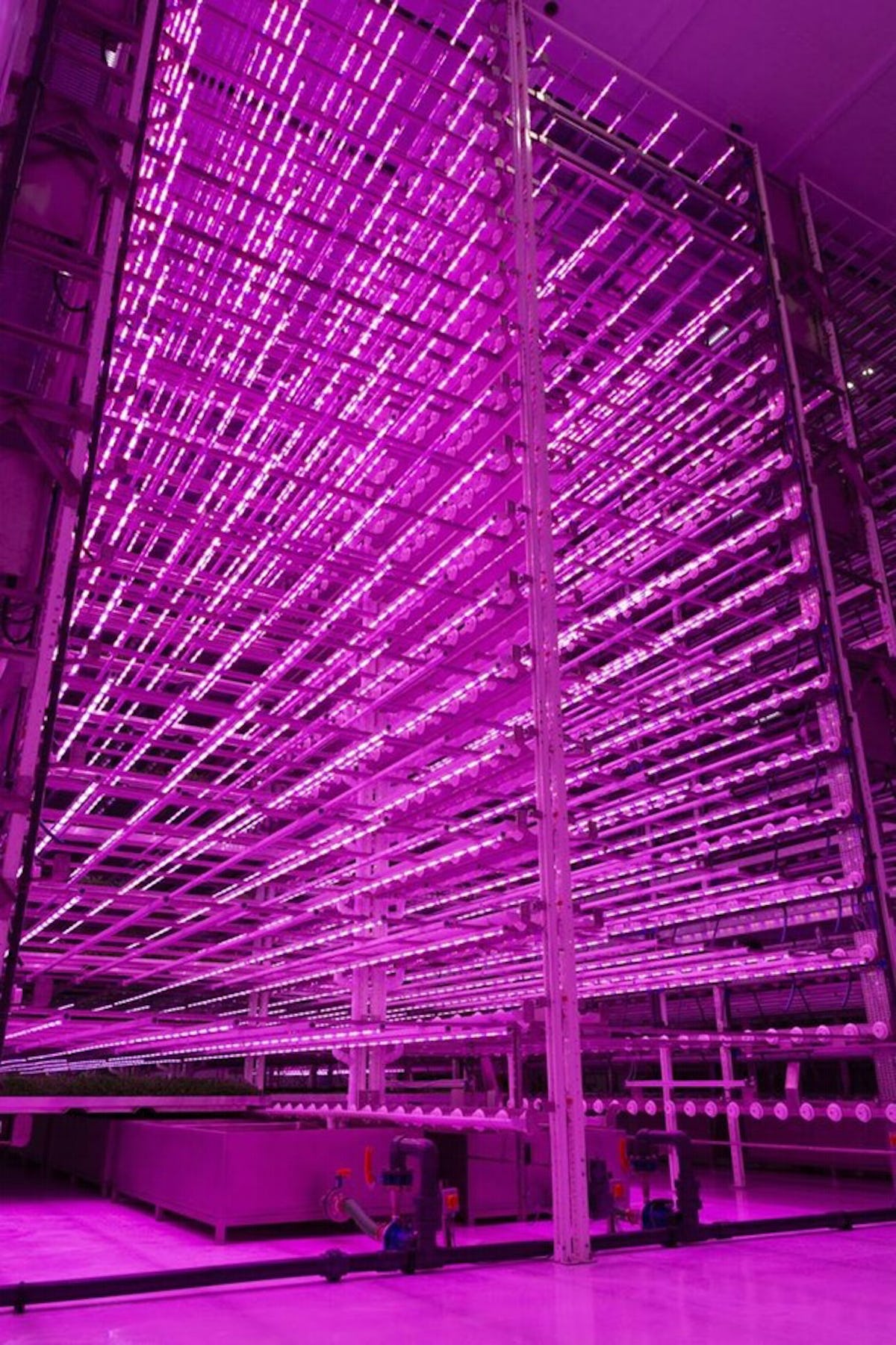 Jones Food Company believes that large-scale facilities are the only way for vertical farms to compete with conventional agriculture (Image source: Jones Food Company).
Not everyone agrees with this large-scale approach, however. Large facilities and automation are expensive, with large scale facilities costing tens of millions of dollars to set up. Whilst this approach might make sense for a factory producing cars or other high-margin products, for low margin products such as fresh produce, it can take decades to pay back this initial investment. Additionally, supply and demand for fresh produce is not always consistent and pricing can change frequently, making it difficult to accurately predict returns on investment, which can be very problematic for a vertical farm that cost several million dollars to build. Furthermore, many of the processes required to grow crops cannot yet be addressed through off-the-shelf automation solutions, creating difficult engineering challenges that can make scale-up very complicated.
A further problem for very large-scale vertical farms is that operational complexity can increase vastly for larger farms. Plants are living organisms that can behave in unpredictable ways, making it difficult to grow them in a manner resembling a factory production line. Plants give out heat and water vapor as they grow, whilst also needing a supply of carbon dioxide and oxygen, in addition to nutrients. Keeping the crop inputs consistent across the whole vertical farm and managing waste heat and water vapor can also be very difficult in a high-density growing space. Careful consideration of the plant science, alongside planning the logistical workflow to maximize efficiency are needed to successfully operate a large-scale vertical farm.
Because of these challenges, some companies have chosen instead to focus on smaller vertical farming facilities, choosing to focus on flexibility instead of economies of scale. For example, Freight Farms, which manufactures turnkey modular vertical farms inside 40' containers, believes that smaller vertical farms enable a more flexible and targeted business model than large, centralized facilities. Small vertical farms can be tailored to certain markets with gaps, such as crops that can't be imported, transient falls in supply for high-demand crops and restaurants or food suppliers that need a specific ingredient. These are all markets in which large, warehouse-like vertical farms cannot easily access.
Rather than focusing on mass-produced, wholesale crops, where vertical farms will always struggle to compete on price with traditional farms and greenhouses, it may make more sense for vertical farm operators to focus on high-value crops that command a price premium, perhaps within niche markets or specialized applications.
The debate over the best size for a vertical farm is still ongoing. There is no easy answer on which model is best, and a would-be vertical farm operator should carefully consider their options and target market before starting a business. For more information and discussion over business models in vertical farming, as well as industry evaluations and 10-year market forecasts, see the recent IDTechEx report "Vertical Farming 2020-2030".
For more information on this report, please visit www.IDTechEx.com/VertFarm or for the full portfolio of AgTech research available from IDTechEx please visit www.IDTechEx.com/Research/AgTech.
IDTechEx guides your strategic business decisions through its Research, Consultancy and Event products, helping you profit from emerging technologies. For more information on IDTechEx Research and Consultancy, contact research@IDTechEx.com or visit www.IDTechEx.com.